Samantha Murozoki is ensuring that people in her Zimbabwe community are getting fed during lockdown, in a country where there is a growing hunger crisis. Source: Africa coronavirus: The Zimbabwean woman feeding thousands daily – CNN Harare (CNN)With her baby strapped on her back, Maud Mufambi clutches a plate as she waits patiently in line […]

Samantha Murozoki is ensuring that people in her Zimbabwe community are getting fed during lockdown, in a country where there is a growing hunger crisis.

Harare (CNN)With her baby strapped on her back, Maud Mufambi clutches a plate as she waits patiently in line for some food.

The 30-year-old mother is among hundreds of people queuing for free food outside a home in Chitungwiza township on the outskirts of Harare in Zimbabwe.
A woman is busy dishing out portions of maize meal porridge and Mufambi and her two-year-old baby are among the grateful diners, who know that, at least for one night, their meal is guaranteed.
Before a friend told her about the kitchen, Mufambi told CNN that her family would oftentimes go to bed hungry.
“My son and I will never go to bed hungry again, this relief kitchen will sustain us as I try to make ends meet,” Mufambi said with a smile.

The kitchen is run by Samantha Murozoki who is ensuring that people in her community are getting fed in a country where hunger is rampant.
More than seven million people — half of Zimbabwe’s population — were facing food shortages or hunger before the coronavirus outbreak in the country, according to the World Food Programme (WFP).
UN food agency WFP is appealing for $US19.5 million to fund its logistics and operational response to the Covid-19 outbreak in the southern African nation.
“WFP is currently scaling up its urban assistance program to deliver monthly cash transfers for food to more than half a million urban dwellers in Zimbabwe by the end of the year,” WFP Communications Director Neville told CNN.
Minister of Labour and Social Welfare, Amon Murwira said the government had revived its social welfare program during the lockdown to cushion millions facing hunger.
“Everyone who lost income can go to social welfare and register for assistance. We have a budget for the next eight months to cater for one million people,” Murwira told CNN.
However, the Covid-19 pandemic has worsened the food situation in the country, according to international agencies.
In March, the Zimbabwean government imposed the first 21-day lockdown, followed by another two weeks as Covid-19 cases increased.
Zimbabwe has officially recorded just 391 cases of Covid-19 but a mass outbreak would devastate an already weakened health system.
Authorities extended the nationwide lockdown indefinitely in May partially opening the manufacturing and mining sectors.
But people like Mufambi, who ekes out a daily living selling imported secondhand clothes, say they’re finding it difficult to eat during the lockdown.
She’s one of more than 16 million people who are struggling to make ends meet, according to the WFP.
It’s a tiny drop in the ocean but Murozoki’s food kitchen is plugging the gap and giving hope to hungry families in the area. 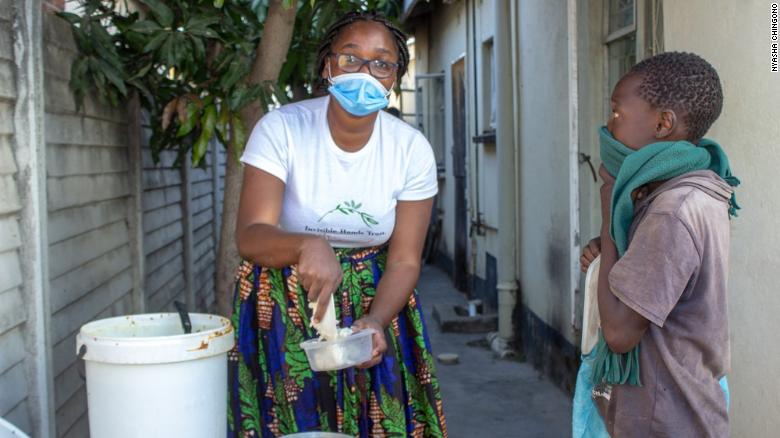 What began as a desire to feed a neighbor who had gone to bed hungry at the start of the lockdown has grown into a community feeding scheme, that attracts more than two thousand people daily, according to Murozoki.
“Ever since the lockdown was introduced, a lot of folks have suffered… they are sitting indoors with no way to make money and to find for themselves. This is how my little unit came up,” she told CNN.
“It was mainly to cater to people I grew up with. Things escalated and I ended up feeding people from all over.” 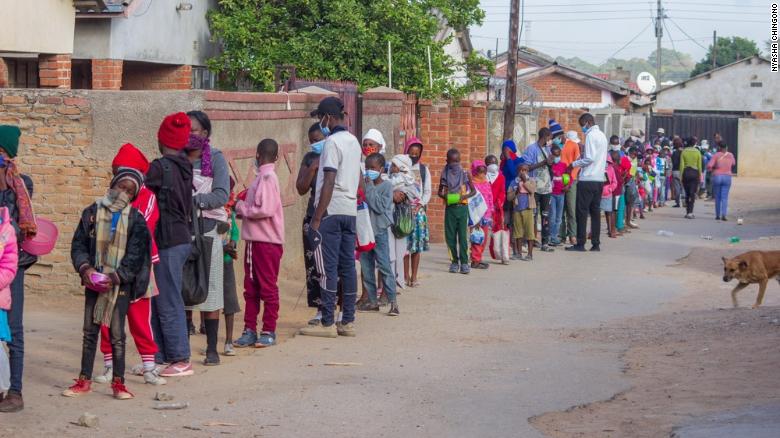 Children queue for food outside Murozoki’s kitchen in Zimbabwe.
Initially, she funded the project out of her own pocket, but the community soon started to contribute to sustain the project — and she traded some of her own items too.
“It took me less than two weeks to get to 867 people coming to eat… so I started to barter jeans, sneakers, jackets. Anything I wasn’t using at the time to trade for maize, cooking oil, salt, labor, so we could get the ball rolling,” Murozoki said.
The 35-year-old lawyer and mother of two, has since become a national heroine and says her life has changed.
“It’s been a roller coaster,” she says. “I’m just happy. My son understands that mummy needs to feed people… My day starts at 4 am and ends at 7.30 pm when we served the last meal… It’s a lot of work… “
In May, Murozoki faced a setback after the Chitungwiza municipal police shut down her feeding kitchen over regulatory issues.
She has since resolved the licensing problems and is feeding even more people.
“Our register has about 4300 people that have had a meal once or twice for the past 33 days. We serve an ever-growing community. I am glad that the government has recognized us and the kitchen is likely to feed more people,” Murozoki said.

‘Worst day of my life’

As well as hunger issues, daily wage earners have also been feeling the full force of the law, following a government crackdown on illegal structures.
Bright Mutema, 34, was forced to watch his vending stall destroyed by Harare municipal police. Local authorities have targeted stalls and wooden cabins like Mutema’s after the government gave orders for them to be destroyed during the Covid-19 lockdown.
“It is the worst day of my life. I thought I would have somewhere to start from after the lockdown but I’m grounded. I fear for my children. What kind of father will I be if I cannot provide,” Mutema tells CNN.
“Many people, including myself are more afraid of hunger than the virus. Hunger is more lethal than this virus that we cannot see,” he said. 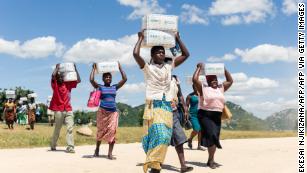 Empty stomachs and unpaid salaries, Zimbabweans face a bleak 2020 as economic crisis deepens
Mavis Mapako, 42, a mother of five, shutdown her tuckshop when President Emmerson Mnangagwa declared a nationwide lockdown in May.
Mapako has now resorted to street hawking for a living.
She has endured running battles with police, ordering people to stay indoors.
“I don’t have anywhere to sell my goods, vending was banned because of the pandemic. We are always harassed by soldiers and police. All I want is food for my family, I don’t even know what to do,” Mapako tells CNN.

The lockdown economic woes have also affected the private and public sectors.
Obert Masaraure, leader of the Zimbabwe Rural Teachers Association of Zimbabwe told CNN that government workers were barely surviving under the extended lockdown.
“The lockdown has affected teachers in a big way. Poverty levels have soared. The majority of our civil servants are earning US$30. They have been surviving on side hustles which are part of the informal economy which has been completely shutdown,” Masaraure said.
“The lockdown has plunged the civil servants into abject poverty,” he added.
Zimbabwe faces a long road to recovery, former finance minister Tendai Biti told CNN. He said the country would remain stuck in depression until the government addresses Mugabe-era political issues that have made the nation ineligible for international funding.
“The key precondition here is to resolve the political crisis but it doesn’t appear that it will be resolved any time soon. So talking about the prospects of a rebound when it comes to Zimbabwe is basically far-fetched and daydreaming,” Biti said.