Source: Anger as August 1 victims mark first anniversary of deadly army clampdown | The Standard (Zimbabwe Stories) News in depth BY BLESSED MHLANGA A year after Dzikamai Chivanga was shot by a soldier while in central Harare, the 26-year-old is still struggling with medical bills and can hardly walk.  Chivanga is one of scores […] 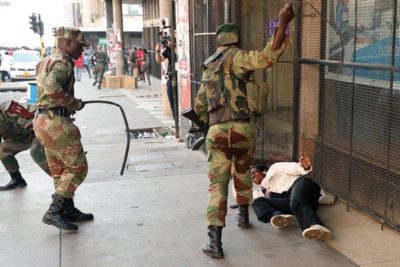 News in depth BY BLESSED MHLANGA

A year after Dzikamai Chivanga was shot by a soldier while in central Harare, the 26-year-old is still struggling with medical bills and can hardly walk.
Chivanga is one of scores of people shot by soldiers deployed to quell the August 1 protests against the delayed announcement of last year’s presidential election results.

Six people, most of them shot on their backs as they fled the soldiers from the presidential guard, were killed.

Chivanga, who was shot while sitting in a commuter omnibus, is one of the lucky ones that escaped with their lives, but is bitter that the government has not
contributed anything towards his medical bills.

“I was shot by the soldiers on my left leg when I was in a kombi,” he said. “I have not received anything from the government towards my medical bills.”

Chivanga said his brothers have been paying for his treatment, but he fears that rising costs are beginning to take a toll on his finances. He said he is also
struggling to fend for his family.

Besides compensation, Chivanga also expects the government to apologise on behalf of the soldiers. He said it was frustrating that a year after the fatal
shootings, the government has not apologised to the victims and their families.

“I am very angry with the government and the people who shot me,” he added. “They should own up.”

Another victim of the shootings Lovejoy Munetsi still has a bullet lodged in his hip and walks with the aid of crutches.

Munetsi, who was teaching at a private college in Harare, was shot as he was leaving for home after work.

Doctors advised that it would be too risky to remove the bullet lodged on his hip because it was too close to some vital organs. Munetsi lost his job and is
struggling to buy medication.

“I was shot on August 1 while coming from work around Nelson Mandela Avenue,” he recounted.

“I was shot on the right hip and doctors say they can’t remove the bullet because the procedure might affect vital parts and that might kill me.”

He said the setting up of the Motlanthe Commission had given him hope that victims would get justice, but is worried that the process to compensate them has
taken almost a year.

Munetsi also wants the soldier that shot him to be punished as recommended by the commission.

“I am worried that it’s now a year since I was shot but no one has been charged,” he said. “I have been taking medication, at least six tablets a day to ease
the pain and I have difficulties sleeping.”

Alison Charles whose brother Garvin Dean was shot on the back as he fled the soldiers that were shooting indiscriminately, said he was angry that the
government has done nothing about his killing a year after the incident.

The government says it is in the process of implementing the findings of the Motlanthe Commission.

On the anniversary of the killings, Foreign Affairs minister Sibusiso Moyo said reforms included provisions that soldiers can only be deployed under the
command of the police during protests.

He said police officers were also being trained on how to handle protests to respect human rights. In June the government said it was assessing 35 cases with a
view of compensating the victims.

However, the opposition MDC, the United States, United Kingdom and the Netherlands expressed concern over the non-prosecution of the soldiers in the killings
as recommended by the Motlanthe Commission last week.

The commission found that those soldiers’ use of live ammunition to quell the protests was “clearly unjustified and disproportionate.”

Brian Nichols, the US ambassador, released a scathing statement on the anniversary of the killings saying President Emmerson Mnangagwa’s government had not
taken any concrete steps to ensure justice for the victims.

“Unfortunately, now over seven months after the Motlanthe Commission’s report’s release, the government has very little to show in terms of its progress,” he
said.

“I read as of mid-June the ministry of Justice was processing 35 victims’ claims for compensation.

“While laudable, this should not take so long. I continue to hear about how the police are being “re-equipped” to better deal with demonstrations, as if this
was the central lesson learned from the commission’s report.

“I have yet to learn of a single soldier or security forces member held to account for the deaths of civilians as the report clearly mandated.”

Former head of the presidential guard Anselem Sanyatwe, who commanded the troops that opened fire on people protesting against the delayed release of president
election results in Harare on August 1, 2018 was last week placed on the US sanctions list.

He became the first person to be sanctioned over the crackdown and the first Zimbabwean official to be put on the US sanctions list since the military ousted
long-time ruler Robert Mugabe in 2017.

Sanyatwe, who is now Zimbabwe’s ambassador to Tanzania, blamed the opposition for the killings when he appeared before the Motlanthe Commission.

Other recommendations made by the commission were that Mnangagwa should engage in a dialogue process with MDC leader Nelson Chamisa to resolve Zimbabwe’s
political and economic crisis.

Mnangagwa, however, has refused to hold talks with Chamisa to discuss the dispute over last year’s elections and has instead launched a dialogue process with
fringe political parties.
Meanwhile, the Zimbabwe NGO Forum marked the first anniversary of the August 1 killings by releasing a documentary capturing the incident that put a dent on
efforts by Mnangagwa’s administration to re-engage the international community.

A number of victims revealed how they were struggling to get treatment and some said they still had bullets lodged in their bodies.

The Forum in June said it was helping several victims of the August 1, 2018 and January 2019 army clampdown to sue the state.

“The Forum issued a total of 68 summonses on behalf of 68 victims of human rights violations,” it said.

“The cases being pursued include cases where the police and army officials indiscriminately assaulted people in their homes, fired live ammunition causing
injury and wanton assaults in various parts of the country.”

Mnangagwa in January deployed the army to quell protests that erupted following a steep increase in the price of fuel.

Human rights groups say at least 17 people were shot to death by soldiers and several women were raped during the clampdown.

Defence and War Veterans deputy minister Victor Matemadanda recently said the government would not hesitate to deploy soldiers that are trained to kill to
quell any protests.

Nichols said the January army clampdown, Matemadanda’s statements and government’s failure to take action against soldiers that killed people in January was
worrying.
“Sadly, the ink was barely dry on the (Motlanthe) report before security forces again acted with impunity killing more civilians in January 2019,” he said.

“Likewise, the government has held no one to account for these deaths either.

“Equally troubling, Deputy minister of Defence Victor Matemadanda threatened to use soldiers ‘trained to kill’ against protesters only a few days ago.”

Nichols was summoned by the government on Friday to protest Sanyatwe’s placement on the sanctions list.