Source: Boterekwa collapse a tip of the iceberg | Sunday Mail (Top Stories) Freedom Mupanedemo Midlands Bureau SEVEN years ago, reports surfaced that a two-roomed house in “Scenic Shurugwi” had disappeared into a sinkhole after a mine tunnel collapsed. Although no one was inside the house, the hair-raising incident left the community shocked. In 2014, […]

The post Boterekwa collapse a tip of the iceberg appeared first on Zimbabwe Situation. 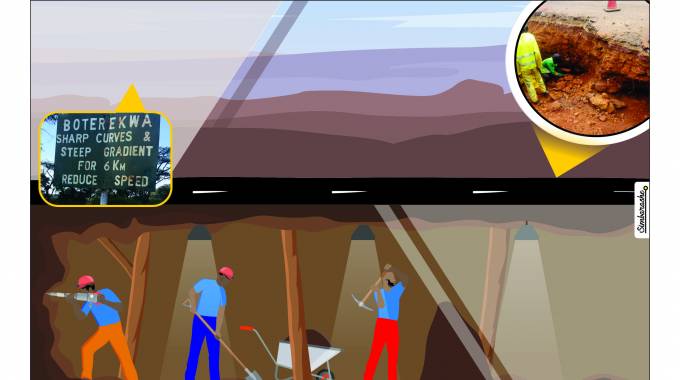 SEVEN years ago, reports surfaced that a two-roomed house in “Scenic Shurugwi” had disappeared into a sinkhole after a mine tunnel collapsed.

Although no one was inside the house, the hair-raising incident left the community shocked.

In 2014, a man living in a compound of a mining company in Kwekwe lost his garden and orchard after the ground gave in, in what was suspected to be a mineshaft failure.

To much shock and awe, a report, however, revealed that the entire town of Kwekwe was in danger of disappearing into the belly of the earth.

Although this was roundly dismissed, many people still live in fear of being buried alive as hundreds, if not thousands, of tunnels meander under the mining towns of Shurugwi and Kwekwe.

For years, chiefs in Shurugwi, Mapanzure and Zvishavane have complained about losing livestock in open pits dug by miners, legal and illegal, in their communities.

A section of a road that links Mandamabwe and Zvishavane was swept away by rains after chrome miners dug too close to the road on either side of the highway.

Much damage has been caused to the environment, road infrastructure, schools and communities in general along the Great Dyke, particularly in the Midlands Province.

This time, environmental transgressions of the past may have finally caught up with everyone who has turned a blind eye.

Boterekwa escarpment, a six-kilometre mountainous stretch of road linking Shurugwi town to Mapanzure communal lands to the south of the mining town, is finally giving in.

After years of being undermined, literally, by fortune-seekers, the meandering road that snakes its way through the Boterekwa Pass in Shurugwi is collapsing.

Built several decades ago by Italian craftsmen, the breath-taking road link has stood the test of time.

Despite several accidents, most of which have been attributed to human error, it has provided passage to cargo trucks, buses and small cars which use the highway from Beitbridge Border Post to Chirundu, the gateway to Zambia and much of Africa’s interior.

According to the district roads co-ordinator, Mr David Dhliwayo, over 100 haulage trucks use the road daily.

But apart from providing access to the two busy commercial border posts, Boterekwa Pass sits along the spine of the Great Dyke, a mineral belt endowed with rich natural resource tapestries.

Talk of gold, platinum, chrome and many other natural treasures — it has them all — hence for years both formal and informal miners have quenched their thirst from its hidden riches.

According to geological surveys, Boterekwa now sits precariously on top of mining tunnels.

The Government recently raised alarm after part of Boterekwa Pass caved in, leaving a huge sink hole in the middle of the road.

Officials from the Department of Roads, which falls under the Ministry of Transport and Infrastructural Development, had to move in swiftly to patch the hole, which Mr Dhliwayo said was caused by underground illegal mining activities.

“The caving in of the road was a result of mining activities along Boterekwa Pass. We moved in and patched the road, but there is need to do a thorough assessment on the whole area with the assistance of geological reports about the area,” he said.

Former mines inspector in the Ministry of Mines and Mining Development who operated in Shurugwi, Mr Tichafa Kwechekweche, told The Sunday Mail that due to the underground mining activities, the highway was now highly compromised.

It has become a double threat to drivers.

“I worked in Shurugwi for years and we did several reports about the status of the road, especially around Boterekwa, following years of mining activities underground,” said Mr Kwechekweche.

“There are several mines whose mining tunnels run directly under Boterekwa along the Shurugwi-Zvishavane highway. Illegal mining activities in the area by artisanal miners have worsened the situation.”

Environmental Management Agency (EMA) Midlands provincial manager Mr Benson Bhasera said the agency will do a thorough geological survey of the area following the recent collapse of a section of the road.

He said EMA had long been battling to contain illegal mining activities by artisanal miners along the Boterekwa Pass, pointing out that they sometimes do joint operations with police to ward off artisanal miners.

“We had this problem of artisanal miners damaging the highway, especially in Boterekwa for years. Every now and then, we do joint patrols in the area, arresting illegal miners who are digging tunnels under the road,” said Mr Bhasera.

He said EMA has conducted campaigns in the area to educate the local community on the dangers of panning for gold along the highway.

Local traditional leader, Chief Mapanzure, said the Boterekwa road was no longer safe due to the mining activities in the area.

“Our problem is not solely at Boterekwa, but the whole stretch of our highway up to Zvishavane. We have several chrome and gold mining activities happening along the highway which has left huge open pits and underground tunnels.

“All these have become a danger to our lives. We have also lost livestock in these open pits that were left open by the miners,” said Chief Mapanzure.

He said there was need for responsible authorities to decisively deal with illegal mining activities in the area to avert disaster, especially at the Boterekwa Pass.

“Remember, there is a house which once collapsed in Shurugwi after it gave in due to some tunnels which were underground. That should have given the authorities enough warning that these illegal activities should stop.

“We are, however, grateful to the Minister of State for Midlands Province, Senator Larry Mavima, who has ordered a stop to mining activities along the highway in the Mapanzure area,” he said.

Midlands provincial roads engineer Denis Mapfurira said a new geological survey of the Boterekwa escapement was necessary due to the continued illegal mining activities in the area.

“There are surveys that were done before I came to the Midlands but the recent collapse of a section of the road, which we are still working on, provides that we do another survey and see the extent of the damage underground,” he said.

It is not the first time that the country has experienced transport infrastructure collapse.

In South Africa, two people were killed and around 20 injured when a temporary bridge collapsed over Johannesburg’s main motorway.

Last year, a large part of a road suddenly collapsed into a building construction site in China.

It is often said that a stitch in time saves nine. It appears authorities will not only have to do more not to lose Boterekwa road but the entire road infrastructure in the Midlands Province that follows the mineral-rich Great Dyke.

The post Boterekwa collapse a tip of the iceberg appeared first on Zimbabwe Situation.