Source: Cheap whiskey imbibers risk infertility: Experts | Sunday News (local news) Dumisani Nsingo/Njabulo Bhebe, Sunday News Reporters IMBIBERS especially those that consume cheap uncertified alcoholic beverages most of which is smuggled into the country from neighbouring countries are at risk of suffering from numerous ailments including loss of fertility, experts have said. There has been […] 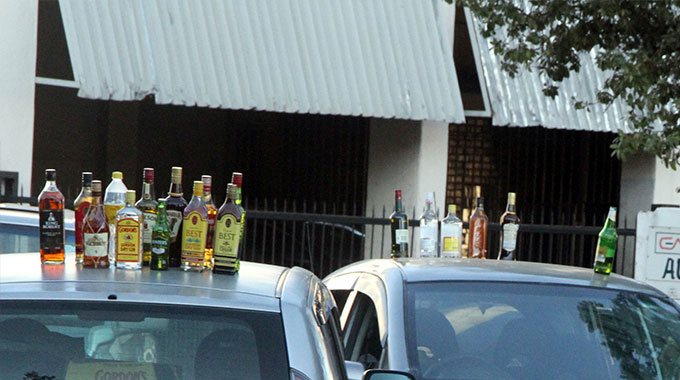 IMBIBERS especially those that consume cheap uncertified alcoholic beverages most of which is smuggled into the country from neighbouring countries are at risk of suffering from numerous ailments including loss of fertility, experts have said.

There has been an influx of cheap uncertified whiskeys, vodkas, spirits and brandies popularly known as “hot stuff” smuggled into the country mostly from Zambia and Mozambique over the past few years.

The price at which the uncertified and counterfeit alcoholic beverages are sold is very low compared to prices on the formal market.

Most of the illicit brews, which are bottled in 200 millilitre plastic containers have high alcohol content than the average prescribed and recommended by health authorities and are sold on the black market throughout the country as traders hide from authorities.

Leadership Standards Systems and Strategy expert Mr Sebastian Zuze said most of the alcohol beverages, which are smuggled into the country do not conform with certain specification standards deeming them hazardous to humans if consumed in excess.

“There are standard specifications, which products must conform to. When you look at how we arrive at these specifications, we would have looked at various impacts of such a product or service . . . coming to these whiskeys we are saying the products must be verified by agents at the borders. The agents must also be aware of these specifications and standards and make sure that measures have been put in place to guard against smuggling. Most of these smugglers know that these products don’t conform to the set standards, so what they do, is smuggle the goods . . . ,” he said.

Mr Zuze said before the production of a certified product wider consultation is undertaken to determine if its chemical content is not hazardous upon consumption.

“In the case of beer and many other alcoholic beverages they are certain chemicals, which are acceptable daily limits, depending on their impact on the human body. If you look at any product, it will actually indicate the right ADI (Accepted Daily Intake) where we are saying the human body can handle such an amount according to scientific investigations . . . if we actually see that beyond this intake or amount of chemical in the body, it becomes harmful. If you are into the manufacturing of alcoholic beverages these become standards for that specific product. There are specification bodies, which actually check these standards so as to protect consumers,” he said.

Mr Zuze said a majority of imbibers, especially youths, were compromising their health by consuming the cheap “hot stuff”.

“Whiskeys that don’t meet specification could be carrying excessive amounts opposed to the (required) daily intake. You will be having a chemical, which looks like the whiskey but which is beyond the specifics. This is where now you hear about beer poisoning, it means the ingredient has been excessive and it begins to damage internal organs, some of the effects are short-term, some of them long-term,” he said.

Mr Zuze also took a swipe at individuals involved in the illicit movement and selling of the cheap whiskeys stating that their actions defeat the spirit of ubuntu and are grossly unethical.

“As a country we need to protect the health and safety of our citizens. There is the issue of ethics, it is unethical to claim that a product is what it is than the actual truth and it doesn’t resonate  with our spirit of ubuntu . . . we should not compromise each other because of money . . . ,” he said.

Mpilo Central Hospital Clinical Director Mr Solwayo Ngwenya said people should desist from excessive drinking as it was hazardous to one’s health with complications affecting the liver, brain and testicles.

“We urge people to avoid smuggled alcoholic beverages because if the content is more than the prescribed limits it will cause serious harm to the liver and the brain. Alcohol abuse causes the brain and vital organs to shrink. So, with time you will find that you will develop some liver pains and, in this country, we can’t do any liver failure transplant and you know you will die,” he said.

Mr Ngwenya said there has been a rise in deaths associated with alcohol abuse globally.

“There has been an increase especially in Western countries of young people with liver failure from alcohol abuse . . . we say don’t imbibe too much and you go ahead and imbibe something smuggled, unverified and unchecked. There are cases where people have actually died in hospitals from alcohol abuse,” he said.

Apart from compromising people’s health, the smuggled beer, which also includes counterfeits has a negative impact on the country’s economy and local beverages manufacturers.

Some of the fake brands include popular brands such as Johnnie Walker’s Red Label, Jameson, Grants, Best, Bols and Two Keys.

African Distillers (Afdis) managing director Mr Cecil Gombera said the company, which was the manufacturer of the original Two Keys brand has been hit hard by unfair competition being exerted by smuggled beverages.

“It is difficult to compete with prices offered by smuggled products as they are not subject to import duties and bypass excise duty levying. While our pricing remains very competitive, any bottle of our brands sold by a smuggler impacts on Afdis’ performance and therefore that’s not good for our operations. It is important to note that the best prices for our brands are available in the formal trade and not on the streets,” he said.

Mr Gombera said there was a need to tighten screws at the country’s port of entries so as to curb the rampant smuggling of goods.

“Controls at all border or entry points need to be tightened to limit and eliminate smuggling. Authorities need to ensure that all imported competing products are subjected to the same duties and taxes we face,” he said.