Source: Coronavirus: Don’t panic, says President | Sunday Mail (Top Stories) Kuda Bwititi Chief Reporter Zimbabweans do not need to panic as authorities are taking precautionary measures to prevent the spread of coronavirus (COVID-19) into the country, while authorities in China have the situation under control, President Emmerson Mnangagwa has said. This comes as China’s […] 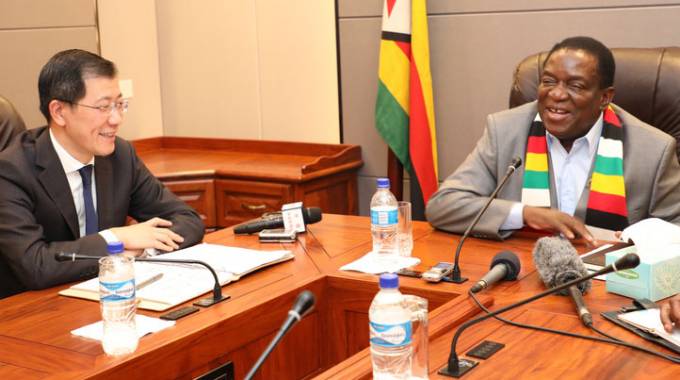 Zimbabweans do not need to panic as authorities are taking precautionary measures to prevent the spread of coronavirus (COVID-19) into the country, while authorities in China have the situation under control, President Emmerson Mnangagwa has said.

This comes as China’s chief envoy to Zimbabwe, Ambassador Guo Shaochun, made assurances that trade and economic trade between the two countries would only be temporarily affected by the virus, which has killed more than 1 000 people in mainland China.

To date, the virus has not been detected in Zimbabwe and no Zimbabweans living in China have contracted the disease.

Responding to The Sunday Mail at a press briefing after meeting with Ambassador Guo at his Munhumutapa offices yesterday, President Mnangagwa said the country’s adherence to World Health Organisation (WHO) guidelines was likely to be complemented by travel restrictions imposed by China between Harare and Beijing.

“From the time of the breakout, there are conditions by the World Health Organisation, universal conditions which require that we take measures, and we have taken those measures and we have been able to acquire some of the necessary equipment to do the checking; and so far in Zimbabwe, we have not recorded any positive cases and we are happy that this is happening,” he said.

“Also the authorities in China have restricted the travel of people from China to Zimbabwe or Zimbabwe to China.

“So these things, again, have been implemented and they are contributing to the status which is there now, which is positive (for us) and we believe that we are in control of the situation.”

President Mnangagwa said it was encouraging that fatalities and new infections of the disease were declining.

“The current indications are that new cases are declining, as the facts now show. Earlier on, the deaths were rising, but now there is an indication of the deaths declining. Also, the volume of the number of people leaving the hospital after being cured is also increasing, which is indicative of the success the authorities in China are achieving to contain the spread of the coronavirus.

“Then, of course, worldwide we have very few new cases that come up. The few that have been reported are not increasing.”

Authorities would remain vigilant to prevent the disease from spreading into the country, he said.

President Mnangagwa said Ambassador Guo was also “thankful” for the letter that he had sent to his counterpart, President Xi Jinping, to express solidarity and sympathy over COVID-19.

“The ambassador was thankful that I wrote to my counterpart, the President of the People of China, giving Zimbabwe’s support to the challenges arising from the outbreak of the virus.

“He was conveying to me that gratitude.

“When the coronavirus outbreak happened in China, we were extremely concerned about it and I, as President, sent a letter of support to my brother President Xi Jinping and to the people of China that the people of Zimbabwe sympathise with you and we expect that everything possible would be done and we are happy with what the leadership of China have done so far.”

The President was also apprised about global challenges that had arisen after the outbreak of the disease, including steps that were being taken by China to contain it as well as minimise casualties.

While there have been concerns that the disease outbreak might affect ongoing multibillion-dollar projects that are being implemented by China in Zimbabwe, Ambassador Guo told The Sunday Mail that the impact on trade and commerce would be minimal.

“Coronavirus has brought some temporary impact to China’s economy but we are very confident that we have enough ability and enough policies to manage the situation and minimise the impact,” he said.

“We are very confident that we will maintain the fundamentals for China’s long-term economic development.

“So the trade between China and Zimbabwe will continue to develop for the interests of the people of our two countries. I am very sure that the impact of coronavirus on people-to-people exchange and trade is very temporary and we will overcome it.”

He said: “It’s very science-based, rationale, reasonable and very effective. That is why so far there are no confirmed cases in Zimbabwe.

“You can see that in China we have adopted the most comprehensive measures to prevent the spread of the virus, and it works. Less than 1 percent of the confirmed cases have happened in China.

“So China is fighting against the battle not only for itself, but the rest of the world, we need understanding and cooperation from all countries.”

Zimbabwe and China enjoy strong ties after the two countries recently upgraded their relations to a Comprehensive Strategic Partnership.