The post Explosives factory to save US$20 million appeared first on Zimbabwe Situation.

Source: Explosives factory to save US$20 million | Herald (Top Stories) 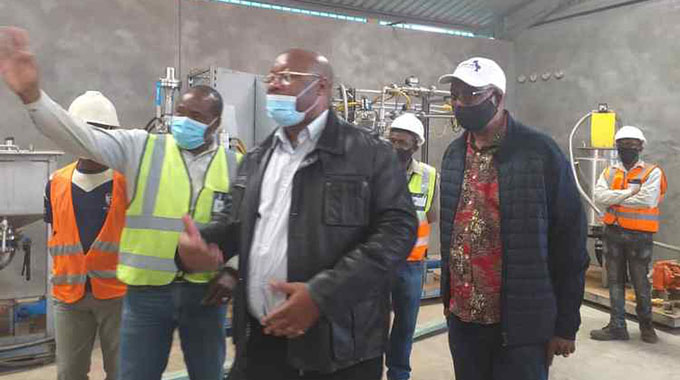 GOVERNMENT has commended progress made on the construction of a multi-million dollar mining consumables factory by Intrachem Pvt Ltd in Kwekwe.

At full throttle, the factory is poised to supply all the local mining industry’s explosives which at present are being imported.

The country would save as much as US$20 million annually from the new plant.

The coming in of the firm will feed into the new dispensation’s import substitution strategy.

Speaking to journalists after the tour, Minister Chitando said the Government looks forward to continuing import substituting all the mining sector consumables.

“. . .  what is absolutely critical is to get as many inputs to be made locally as opposed to exports and one of the major inputs in the mining industry are explosives,” said Minister Chitando.

“At the moment we are importing all our  explosives and what we have here is a setup which has got the ability to supply explosives to the entire US$12 billion mining industry by 2023.

“Government is very happy with this progress and would like to see other imports into the mining industry being made locally,” he said.

Intrachem managing director Mr Langton Nyandoro said the factory is poised to open in September having been delayed by Covid-19 restrictions.

He was also quick to thank the Government for getting exemptions to continue work during the lockdown.

“The first phase is set for commissioning in September,” said Mr Nyandoro.

“The first phase is the bulk of the project and this is what you are seeing and on completion has the capacity to cater for all the explosives the country is importing.

“In terms of saving on import substitution the US$20 million (annually) the minister is talking about is real.

“But going forward it certainly will be more,” he said.

The post Explosives factory to save US$20 million appeared first on Zimbabwe Situation.