Source: First Lady honours national netball team | Sunday Mail (Top Stories) Debra Matabvu The national netball team, the Gems, was yesterday feted with hampers by First Lady Auxillia Mnangagwa, while Government also chipped in with a $20 000 bonus for each player to celebrate their exploits at the recent Vitality Netball World Cup in […] 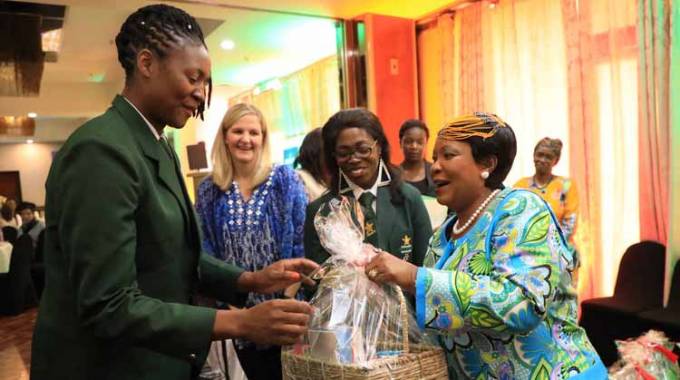 The national netball team, the Gems, was yesterday feted with hampers by First Lady Auxillia Mnangagwa, while Government also chipped in with a $20 000 bonus for each player to celebrate their exploits at the recent Vitality Netball World Cup in Liverpool, England.

The payout was over and above the team’s allowances and winning bonuses for the tournament.

Speaking at a welcome luncheon held in the capital, the First Lady said the recent participation by the team at the tournament — where they finished eighth — showed that more women were taking up sports to empower themselves.

She said the Gem’s exploits not only elevated local sport, but also cemented their role as the country’s ambassadors.

“I am reliably informed that in the history our country this was the first time for a senior women’s team to qualify for a netball world cup, and coming up in the top ten among the world’s strongest netball teams is no minor achievement,” she said.

“Surely, it is slowly dawning on us that our women have a competitive advantage in sport and need our support in the manner we did for these girls.

“Our participation at the Vitality Netball World Cup competition was a milestone achievement in terms of our envisioned sport diplomacy as underlined by the national sport and recreation policy.”

She said the netball team managed to lift the country’s flag high.

“And if the truth is to be told, it was evident for all of us to see that in Liverpool our girls did justice for us.

“I sincerely hope our overseas hosts who supported us will also come to the home of the Gems right here in Zimbabwe for an experience with our stunning scenery and unique culture,” she added.

Sport, Amai Mnangagwa said, “does not only boast of some of the best sporting spectacle in the world, but it has also produced many positive role models who are an inspiration to young women and men around the world.”

She also thanked the corporate world for supporting the team and implored them to continue with their assistance.

Minister for Youth, Sport, Arts and Recreation Kirsty Coventry said the Gems were role models in the community and they had a huge role in supporting upcoming youths.

“I wanted to give a bit of advice from someone who has been able to do the same thing that you have done: you have a huge responsibility on your shoulders, you are now role models not only to your family members, but also to young women and girls throughout the country. They are looking up to you, please continue shinning.”

He also said sport played an integral role in the community as it contributed to empowerment.

“As Harare Metropolitan province, we are very much alive to the role sport and recreation plays in transforming livelihoods.

“Sports and recreation as an industry is able to sustain livelihoods in communities, thereby contributing to Government thrust of empowerment and reducing unemployment and poverty.”

Zimbabwe Netball Association of Zimbabwe president Leticia Chipandu thanked the First Lady and the corporate world for supporting the team at the World Cup.

Yesterday a local firm, Tiger and Wheels, also pampered the team with hampers.