Source: Huge Mugabe send off planned – NewsDay Zimbabwe September 9, 2019 BY BLESSED MHLANGA/DESMOND CHINGARANDE THE late former President Robert Mugabe is likely to be buried at the national shrine this Sunday after what is expected to be a huge send off at the National Sports Stadium on Saturday, highly-placed sources have said. “The […] 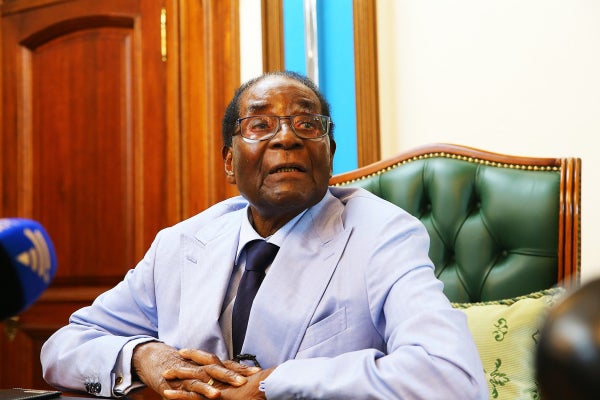 THE late former President Robert Mugabe is likely to be buried at the national shrine this Sunday after what is expected to be a huge send off at the National Sports Stadium on Saturday, highly-placed sources have said.

“The plan is to have him buried at the national shrine, everything has been put in place and agreed. Unless some unforeseen changes happen, that is where he is headed, but before that there will be a State funeral at the National Sports Stadium to bid him farewell,” a family source said yesterday.

Government officials would not confirm the burial place, saying it was still to be finalised, but said Mugabe will be taken to the National Sports Stadium, a venue where he presided over many national events over his 37-year rule.

“His final burial place has not been decided, but the plan indeed is to have a State funeral for the founding father at the National Sports Stadium on Saturday,” Information ministry secretary Ndavaningi Mangwana told NewsDay yesterday.

Government, through the Foreign Affairs ministry, has already invited diplomats and heads of State from other countries to attend the State funeral.

In a diplomatic note sent to missions accredited to Zimbabwe, the government said it will only host heads of State or government for one day and they will be expected to leave soon after.

“The State funeral service will be held on Saturday September 14, in the morning at the National Sports Stadium in Harare; the times will be advised. Heads of State and government wishing to attend the ceremony are advised to arrive in Harare on Friday. Heads of State and government are expected to depart immediately after the ceremony taking into consideration that government authorities will be fully occupied with preparations for the burial service reserved for Sunday September 15, 2019,” the note read.

Mugabe, ousted from power in November 2017 by the military in a coup, died aged 95 in Singapore on Friday after battling long illness.

There have been tensions between Mugabe and the President Emmerson Mnangagwa-led government following the coup with the two former close confidantes not having spoken face to face since Mnangagwa was sacked from government just before the coup.

Speaking from Mugabe’s rural home in Zvimba, family spokesperson Leo Mugabe stoked the fires, saying his uncle could have lived beyond 95, but died early because of the coup.

“He died a very bitter man. Imagine the people who are guarding you, that you trusted the most turning against you. They have tainted his legacy, it’s not an easy thing,” he said.

Insiders said the Mugabes were allowing the body of the former President to be interred at the national shrine in a bid to protect both his legacy and assets.

“There is an understanding that peace has to happen and the legacy of Robert Mugabe be preserved. We do not want to have running battles, it’s not in the interest of the family,” the source said.

Speaking to journalists, Leo also said some of the relatives of the late politician failed to travel to Singapore to be with him and witness his last moments because their passports had been confiscated by the courts.

“I would have loved to go and see him during his last days, but I could not go to Singapore because the people I was supposed to go with, Albert Mugabe and Walter Chidakwa, have no passports as they were confiscated by the courts,” Leo said.

“I wish I could have seen him alive, we already had the itinerary for the journey, but the problem were the passports. ”