Source: Huge send off for national hero SK | The Herald

Zimbabweans from all walks thronged the National Heroes Acre yesterday to pay their last respects to the late liberation stalwart Ambassador Simon Khaya Moyo who succumbed to cancer on Sunday, November 14 2021 at Mater Dei Hospital.

The atmosphere at the national shrine was different as thousands of mourners were allowed to gather for the first time in almost two years, with Covid-19 protocols of wearing masks, social distancing and washing hands being strictly observed.

Previously, only relatives and invited guests were allowed entrance at the revered national burial shrine where some of the country’s illustrious sons and daughters are buried.

Yesterday mourners had to provide proof of vaccination with President Mnangagwa urging the nation to embrace the ongoing vaccination programme, in which Government has since acquired enough vaccines

In recognition of the sterling work of the late national hero, some held banners inscribed: “Diplomat par excellence”, “Communicator par excellence”, while others had “Dedicated diplomat” and “Unifier”.

Addressing mourners at the National Shrine, younger brother to the late Cde SK, Mr Isaac Moyo expressed gratitude to President Mnangagwa, Zanu PF, Government and the nation at large for conferring the national hero status on the late liberation hero whom he said had much love for the country and family.

“As the patriarch of the family, the late SK taught us the values of hard work, discipline and commitment to family. No sacrifice was too big to him. As busy as his schedule was, he would always make time for family, no matter how small the occasion was.

“He taught us to be honest and to value hard work. He often reminded us that there were no shortcuts in life and that corruption was a result of ill-discipline. Yes, he was a disciplinarian, but he would always dispense discipline with a smile on his face,” said Mr Moyo. 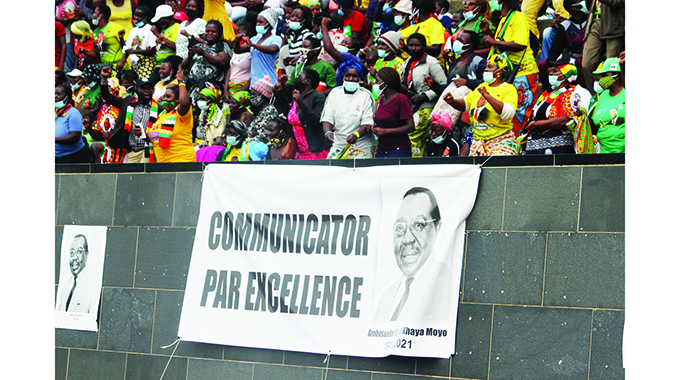 Speaking on the side-lines of the burial, Cde Tshinga Dube, a former freedom fighter who worked closely with the late Cde SK Moyo during and after the liberation struggle, described him as a hard worker.

“We used to joke with him that he was Mr Ten Years because for 10 years he was serving apprentice under the late Cde Nkomo, for another 10 years he was working in various Government levels as a minister and eventually for 10 years he became ambassador to South Africa where he worked very well,” said Cde Dube.

Former Governor for Manicaland, Cde Tinaye Chigudu, who worked closely with the late Ambassador Moyo during and after the liberation struggle also spoke highly of the late liberation war stalwart.

“As the President was saying, he was such a resolute person. He was not the type of person to be found wavering and he would always take a very strong stance against people who were waverers. He was a very straightforward person,” said Cde Chigudu.

“I worked with him after I took over as Minister of State in the late Joshua Nkomo’s office and he was the outgoing personal assistant. He was a jovial person and I never saw him becoming angry with anyone. He was very hardworking and also a fighter who never gave up on things,” outlined Minister Nyoni.

Zimbabwe’s former ambassador to China, Cde Chris Mutsvangwa, who is also the Zimbabwe National Liberation War Veterans Association (ZNLWA) chairman said the late Cde SK Moyo was a distinguished diplomat who served his country well at the time of the Land Reform Programme when erstwhile colonisers were attacking the country.

“At independence, he became a national figure and later on when the country was facing serious economic challenges due to British attacks, especially after the land reform, Ambassador Moyo ended up in South Africa as a diplomat who worked very closely with our ANC revolutionary brothers and sisters to make sure that the country was saved from a war similar to the one that visited Iraq.

“Ambassador Moyo used his diplomatic skills and his revolutionary background and his access to President Zuma to make sure that Tony Blair, the warmonger, was constrained. He played a very crucial role in saving the country from a second war,” said Cde Mutsvangwa.