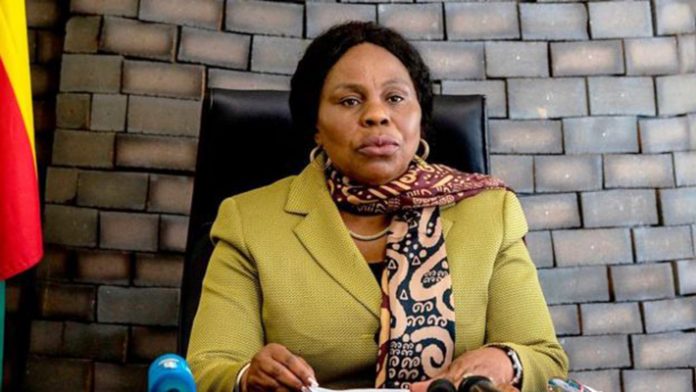 Cabinet received an update on the Country‘s Response to the Covid-19 Pandemic, Procurement and Roll-Out of Vaccines,  as presented by the Chairman of the Ministers’ National Committee, Vice President and Minister of Health and Child Care, Honourable Dr. C.G.D.N. Chiwenga.

The nation is advised that, as at 15 November 2021, the country’s cumulative COVID-19 cases stood at 133 471 with 128 305 recoveries and 4 697 deaths. The recovery rate was 96% with 469 active cases reported. The number of COVID-19 cases in schools is declining, as well as those in need of hospitalization for COVID-19, with no patients under intensive care. In general, therefore, this indicates that the national response measures instituted by Government continue to pay off and that the pandemic is being brought under control. Government, nonetheless, continues to call upon citizens to strictly observe the national and World Health Organisation (WHO) COVID-19 protocols as well as to get vaccinated to prevent a 4th wave of the COVID-19 outbreak.

Regarding the national vaccination programme, Cabinet wishes to inform the nation that, as at 15 November 2021 a total of 3 483 353 first doses of the COVID-19 vaccine had been administered, while 2 706 096  people had received their second dose.

The cumulative weekly total number (1st and 2nd doses) of vaccines administered during the week under review increased to 144 253 from the 114 873 administered the previous week, indicating that the provincial vaccination blitz  launched in October 2021 is yielding the desired results and will be strengthened.

Focus continues to be on achieving the end of year national and global target of total population coverage of 60% and 40%, respectively.

To this end, members of the public are urged to present themselves for vaccination as Provincial Vaccination Teams have ramped up implementation of their respective District Vaccination Micro-Plans, including mobilisation campaigns.

On the procurement of vaccines, it is advised that 435 600 doses were received on 5 November 2021, bringing the cumulative number of vaccines received to date to 13.258 million doses. Government takes this opportunity to assure the nation that most of the country’s vaccines still have some years to go before expiry.

Cabinet would also like to announce the extension of the Level 2 Lockdown by an additional 2 weeks to enable all to heighten vaccination uptake in order to protect the nation against a possible 4th wave of the pandemic.

The Minister of Lands, Agriculture, Fisheries, Water and Rural Development, Honourable Dr Anxious Masuka, presented the Update on the 2021/2022 Summer Production Season, which was adopted by Cabinet.

Regarding the ongoing marketing of grain, a record total of 1 265 688 metric tonnes of grain have so far been delivered to the Grain Marketing Board (GMB) comprising:

The grain delivered to date is valued at about ZW$46.6 billion, and Government is making strenuous efforts to expedite payment of the outstanding ZW$5.6 billion owed to farmers.

On preparations for the summer grains production season, over two million farmers have so far been trained under the Climate-Proofed Presidential Inputs Pfumvudza/Intwasa Supply Scheme, while 2.3 million have already done the requisite land preparation (digging holes/holing out). Inputs distribution under the Scheme is ongoing.

Local fertiliser companies will also be supported to make the commodity affordable through local production. In that regard, the foreign currency auction market is being fine-tuned to ensure that the companies get the requisite foreign currency on time and clear funding backlogs.

Meanwhile, some 113 477 tobacco growers have registered for the 2021/2022 season, compared to 123 159 growers who registered during the same period last season. To date, a total of 24 682 hectares of tobacco have been planted, representing a 31% increase in the total area planted compared to last season.

Pertaining to cotton, Cabinet wishes to advise the public that the marketing of seed cotton has tailed off. A total of 132 862 054 kilogrammes were delivered to the country’s 6 cotton contractors, compared to the 83 059 898 kilogrammes received last year, translating to a 59.1% increase. In terms of preparations for the 2021-2022 summer production season, a total of 347 583 households have been trained under the Presidential Climate-Proofed Pfumvudza/Intwasa Cotton Programme and inputs distribution is underway.

Cabinet considered and approved the Construction of Government Boarding schools as presented by the Minister of Public Service, Labour and Social Welfare, Honourable  Professor Paul Mavima, as Chairperson of the Cabinet Committee on Social Services and Poverty Eradication.

The demand for education continues rising, with 37.3% of the country’s estimated total population being of school-going age. More schools are needed to accommodate the projected increase to 5 657 412 for the school-going age group. The COVID-19 pandemic has also increased the demand for new schools and additional school infrastructure so as to decongest existing boarding schools.

To cater for the increase in demand for both primary and secondary education and ensure that no child walks more than 5 km to school, the Ministry of Primary and Secondary Education intends to build 3 000 new schools by 2025. During implementation of the project, more secondary than primary boarding schools will be constructed in an endeavour to satisfy increased demand. Some existing day schools will be converted into boarding schools, while some low-cost boarding facilities will be constructed at existing schools as the need arises.

The project will be implemented in phases next year, starting with one hundred and forty four (144) model 21st Century Government primary and secondary boarding schools spread across all the country’s 10 provinces. One primary and one secondary boarding school with adequate state-of- the-art facilities will be constructed in each of the seventy two districts of the country.

Adequate furniture and ICT equipment will be procured for each school, while a source of clean potable water will be installed within 500 metres of the school and including a reticulation system and ablution facilities. Each school will be electrified and provided with internet facilities. The school will be fenced, and civil works in terms of access roads, a car park and landscaping will be undertaken. Each school will have enough land for sport infrastructure, commercial farming and manufacturing.

Treasury will fund the first one hundred and forty-four schools, while Public- Private or joint venture arrangements will be crafted to assist in the construction of the three thousand new schools.

Cabinet received an update on EXPO 2020 DUBAI as presented by the Minister of Foreign Affairs and International Trade, Honourable Frederick Makamure Shava.

The nation is informed that the construction of the Zimbabwe Pavilion which is inspired by the Great Zimbabwe monument, its stonework and conical towers was completed on time, allowing it to open to the public on the official opening day on 30 September 2021. The exhibition is punctuated by objects which include traditional musical instruments, the big five beaded animals, picture gallery, sculptures, traditional objects, jewellery, seed display and digital content screening of various economic sectors and opportunities.

The Zimbabwe Pavilion received a total of 55 500 visitors in the month of October and this is attributed to its strategic location, which is close to the United Arab Emirates Pavilion. The custom-made Zimbabwe pavilion passport stamp is also a major draw card.

The nation is advised that the agriculture sector has been receiving the second highest inquiries as most companies are keen to invest in agriculture in Zimbabwe due to the emphasis on organic and natural produce.

Cabinet would like to encourage the private sector to participate at this fair. The calendar of events lined up to 31 March 2022 can be obtained on the Expo 2020 Dubai website and at the Ministry of Foreign Affairs and International Trade.

Cabinet considered and adopted proposals on the Establishment of the Horticulture Export Revolving Fund as presented by the Minister of Finance and Economic Development, Honourable Professor Mthuli Ncube.

The Horticulture Export Revolving Fund will be financed to the tune of US$30 million in order to support export-oriented horticultural production companies with their foreign currency requirements. It will be recalled that Government has proposed to use part of the Special Drawing Rights (SDRs) received from the International Monetary Fund (IMF) to support the productive sectors of the economy.

In the agriculture productive sector, priority has been placed on horticulture and irrigation development. Treasury has, therefore, engaged stakeholders in the horticulture export sector on the modalities for the establishment of the Horticulture Export Revolving Fund, in line with the Horticulture Recovery and Growth Plan.

Horticulture is one of the key sub-sectors of the agricultural sector in Zimbabwe, with substantial potential of successful production across all agro-ecological regions. Zimbabwe was among the top 3 horticulture producers in the world after the Netherlands and Equador up to 2002. The Second Republic intends, through the Revolving Fund, to restore Zimbabwe’s former glory.

Currently, the industry contributes US$77 million to the country’s export revenue and employs about 18 700 people. Horticulture is a major foreign currency earner and is projected to contribute US$300 million annually in export earnings by 2030. To attain and sustain this level of growth, the Horticulture Export Revolving Fund will address the major challenge of unavailability and lack of access to appropriately structured financing for short to long-term  expenditures.

The Fund will also close the funding gap in the value addition and beneficiation of fresh produce, which has resulted in horticultural value-chain margins being unsustainably squeezed. Value addition increases return on investment by offering a diversified group of off-takers for horticultural farmers, even for lower grade produce.

Cabinet wishes to inform the public that the facility will be accessed through the normal banking channels, with applicants or intended beneficiaries submitting their requests to participating banks with the requisite information.

Government and the participating banks will monitor and evaluate the use of resources advanced to borrowers, while a Multi-Sector Coordination Committee has been set up to undertake the following functions, among others:

The following indicators will be collected and analysed on a regular basis:

Cabinet notes that horticultural farmers have hitherto been disadvantaged by lack of markets. However, as a result of the Second Republic’s current engagement and re-engagement efforts, markets are beginning to open up. The Fund will ensure the capacitation of ZimTrade and the Agricultural Marketing Authority (AMA) to enable them to open up verifiable markets for horticultural farmers.

Another key highlight under the Fund is the establishment of value-addition facilities close to production bases in order to unlock the country’s horticultural smallholder potential. As stipulated in the National Horticulture Recovery and Growth Plan, the Fund will be used to develop the Hub and Spoke model to create markets for surrounding communities and also bring in a number of services in rural areas.

Beyond production, the Fund also makes provisions for logistics and cold chain facilities, a move which will lower post-harvest losses and facilitate market access. Mentorship programmes will also receive support under the Fund.

Cabinet received and considered an update on the state of preparedness to host the International Conference of African Cultures (ICAC) as presented by the Minister of Youth, Sport, Arts and Recreation, Honourable Dr. Kirsty Coventry.

The nation is informed that preparations for the hosting of the conference are at an advanced stage of completion. The conference will be in hybrid format, that is, both physical and virtual attendance by 34 delegates from Zimbabwe and the African continent.

The Conference will be live-streamed on all social media platforms. The public is informed that there will be a Visual Exhibition running with the theme “Looking back and looking towards the future: Celebrating Africa in Africa”.