Source: Little Zimbabwe Farm offers food, music and culture — The Discourse. Amy and Tafadzwa Matamba are on a mission to improve local food security and give the community agency when it comes to their food. Sitting on the outskirts of Duncan, B.C. in the shadow of Mount Prevost is a farm-meets-cultural centre that is […] 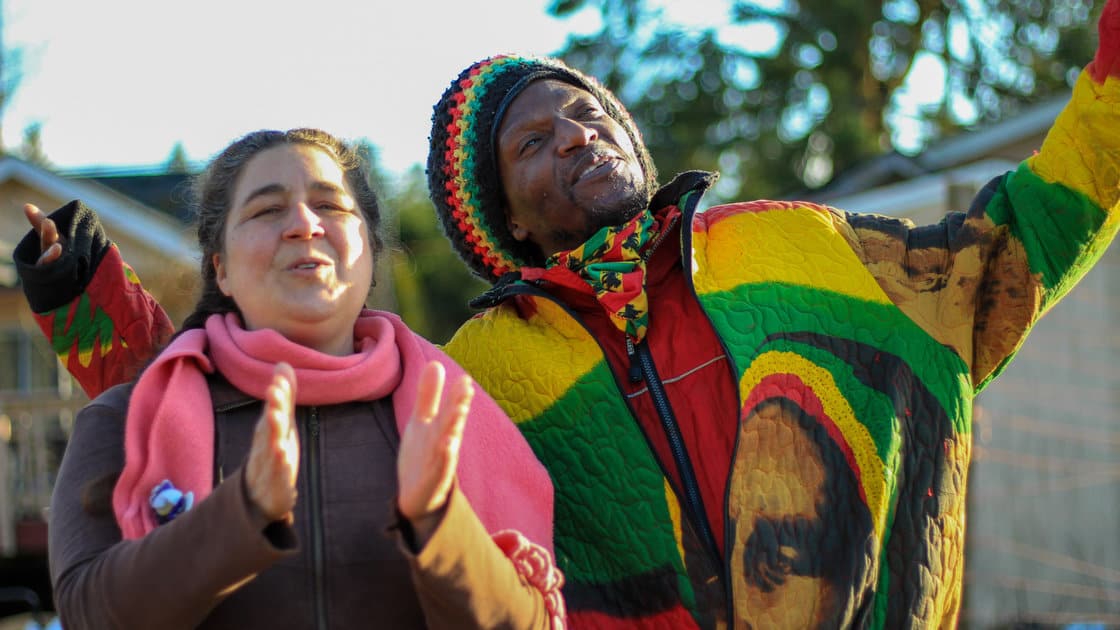 Amy and Tafadzwa Matamba are on a mission to improve local food security and give the community agency when it comes to their food.

Sitting on the outskirts of Duncan, B.C. in the shadow of Mount Prevost is a farm-meets-cultural centre that is unique to the Cowichan Valley.

Crops like kale and garlic grow on the seven-acre property and a truck in the driveway dons a bumper sticker for the Zimbabwe Music Society. The farm’s roadside sign reads “Little Zimbabwe: Vancouver Island’s Happiest Place” and advertises the Matamba Cultural Arts and Education Centre as well as Little Z’s Chicken, Beef and Veggie Pies.

Amy and Tafadzwa Matamba pop around from the back of their home to offer a warm welcome and say hello. The two of them, eager to talk about their journey, have just a few hours before their online performance as part of the Ultimate Online Nova Scotia Kitchen Party Facebook group.

Getting to where they are today has been years in the making but their work as musicians and farmers isn’t finished.

Through food, farming and music, the Duncan couple’s hope is to give Cowichan Valley residents a space to hold a cultural exchange and share knowledge so the community can become more food secure and resilient.

“It took us a long time to find this place where we could look at something that was beneficial for growing food,” Amy says. “And also a space where we could do a lot of our community-inspired visions, like community gardens and bringing people together for education and music. A space that’s amazing for cultural exchanges.”

Amy and Tafadzwa met because of their shared interest in music. Amy, a former music teacher from the Cowichan Valley, travelled to Zimbabwe where Tafadzwa hosted cultural tours.

Tafadzwa taught and encouraged Mbira music through his tours. The music, as well as the instrument that goes by the same name, is traditional to certain tribes of the Shona people in Zimbabwe. It has connections to sacred and secular culture and is a form of communicating with ancestors and praying for things like rain during a drought, according to the Mbira organization.

At one point, Zimbabwe was colonized and referred to as Southern Rhodesia and then Rhodesia, the Mbira organization says. During that time, missionaries taught people that Mbira was evil and the practice of Mbira saw a decline. In 1980, Zimbabwe became independent again and has since seen a resurgence of Mbira.

Tafadzwa says he wanted to get rid of the negative stigma associated with Mbira that still lingers from colonial times.

“As a country that was colonized by Britain, you’ll find that our culture was just toasted to the ground and there isn’t much appreciation for Indigenous knowledge. People forgot their roots,” Tafadzwa says. “I got involved with schools to reawaken the culture.”

Amy, who was studying Mbira music in Canada, fell in love with it. Community members helped her gather the funding to travel to Zimbabwe, where she connected with Tafadzwa in 2012.

Shortly after, the two of them moved back to the Cowichan Valley together.

Tafadzwa, who comes from a farming background in Zimbabwe, says he was shocked to see how much food was imported to Vancouver Island. He started collecting stickers from produce, mapping out the many places in the world food was coming from.

Zimbabwe was once seen as the bread basket of Africa. Now, more than 60 per cent of Zimbabwe’s population is considered food insecure, according to a United Nations expert.

Vancouver Island has seen a parallel transition. Over the course of half a century, Vancouver Island went from producing close to enough to feed itself to importing the vast majority of the food consumed. An estimated 14 per cent of Cowichan Valley residents cannot afford access to enough nutritious food, according to a 2017 University of VIctoria report.

Related: COVID-19 peels back the curtain on food insecurity on Vancouver Island

Realizing that he had the traditional knowledge and background to grow his own food, Tafadzwa says he took to gardening in his and Amy’s backyard in Mill Bay. Eventually, every square inch of their yard was used to grow food, some of which they sold as well.

“I came to a first world country but the food is coming from places like China,” Tafadzwa recalls. “I was flabbergasted and wondered how that could be sustainable. And then I also thought about the people of Zimbabwe who once relied on their own food.”

They also held gatherings at their home to share Mbira music with community members and hold cultural exchanges through music.

Amy says farming added “a whole other layer” to the work they were doing as educators, musicians and community organizers.

Looking for more space, the couple purchased a farm on Cowichan Lake Road near Tansor Elementary School about three years ago. With little funding, Tafadzwa decided to farm using traditional practices like natural irrigation and planted crops that would be more resilient against critters like deer.

Amy, who likes to cook, started finding ways to process the food and sell it. She made new products like kale and garlic scape powders as well as dried kale — a common food in Zimbabwe. Most recently, she’s started making pies and pestos. The food she makes completes what they call a “seed to belly” cycle.

They have also partnered with the Canadian Mental Health Association in Cowichan to mentor youth, who come to the farm and help with the seed-to-belly process. Depending on their interest, they learn to farm and sort seeds as well as cook and process food and are helping establish a community garden at the farm.

Knowing that the Cowichan Tribes community was also in need of support during the pandemic, the couple cooked meals for them, too.

So how does Amy and Tafadzwa’s music fit in with farming? Tafadzwa says it’s only natural.

“Growing up, what really made things bearable was the music,” Tafadzwa says. “During farming, there was a lot of singing and that was motivation. You can’t separate the relationship between singing and farming.”

While the COVID-19 pandemic has been a big hit to the couple, who travelled and performed before the pandemic, they say it has also brought renewed interest in local food security and embracing local talent. Their dream is to build a flourishing cultural centre where they can offer community garden plots and educate youth and community members about music, farming and food processing.

Amy is quick to say that while they’re building towards their dreams, the couple is still struggling to find their footing.

She says they’ve applied for a few grants but haven’t always been successful and, due to the ongoing COVID-19 pandemic, their musical performances and gatherings are on hold, too.

“We are in a place where we are struggling to keep this going and COVID-19 definitely affected our business,” Amy says. “We’re scrambling to get it all up and running and hopefully invite the community when we can.”

Amy says the couple has done some outreach to the community. They’ve held pancake breakfasts and African dinners, which involved sharing music and traditional knowledge. She says it has been a good start but they had to stop everything when the pandemic hit. Since then, they’ve really shifted their focus to food and, in particular, prepared foods that can be kept for longer, like their homemade meat and vegetable pies.

Tafadzwa says he worries about racism getting in the way of their goals, too.

He says he has posted callouts on Facebook, inviting community members to farm on their property, learn from Tafadzwa and create a community garden. But his callouts received little to no response.

“Is it because I’m Black?” Tafadzwa asks, getting emotional as he recalls Zimbabwe’s colonial history and the struggles he and Amy have faced.

“The community doesn’t come or even say, ‘Hey guys, these are hard times, what’s happening with you?’” Tafadzwa says.

He points to the mountain that sits at the horizon, meeting their farm.

“It’s like we’re just trying to crawl up the mountain, up Mount Prevost,” he says.

Tafadzwa says that as someone who is native to Zimbabwe, he wants to share his Indigenous knowledge of farming and music with others and receive knowledge from the community as well. Both Amy and Tafadzwa call their approach “edutainment.”

They say their education backgrounds mixed with their passion for music and farming are the perfect ingredients for edutainment. It combines fun with practical skills that can help community members have more agency over the food and culture they’re consuming.

Their website offers farming programs for youth, seniors, school groups and any volunteers. The pair have also created Zimbabwe Music Society which, according to its website, aims to connect Vancouver Island with Zimbabwe by sharing and preserving cultures and traditions unique to both places. Through the society, they hope to support education, scholarships, cultural exchanges, medical support, a soccer academy, drilling wells, agriculture and sustainable living initiatives in Zimbabwe and on Vancouver Island.

Amy says Little Zimbabwe Farm’s presence on Facebook seems to be growing, with more community members showing their support. As they try to realize their goals, positive comments from the community make all the difference.

“That show of support has made us feel really good,” Amy says. “It’s like ‘OK, yes, we’re actually really happy.’”

As they walk through their farm past rows of garlic with their scapes popping up through the ground, the two of them sing. Their voices weave together in perfect harmony as they close their eyes and smiles glean across their faces.