Lincoln Towindo
Davison Nhika is the branch supervisor at the Third Street CMED (Central Mechanical and Engineering Department) service station in central Harare, and every day he had to undertake the painstaking task of physically checking the amount of fuel in the four underground tanks, at intervals.

This arduous task involved physically removing the lid from the tanks before inserting a dip stick and recording the amount of fuel stored underground and reconciling it with book records.

“I have been doing this for years and have had to report for duty every single day, even on holidays, to record the amount of fuel we have in stock,” he told The Sunday Mail recently.

“In January during the street riots, I had to drive here to work and record the fuel and you can imagine what sort of a nightmare that was.”

However, a new technology being piloted at the service station has made life all the more easier for Nhika and his workmates.

CMED Third Street branch is one of the three stations where the National Fuel Distribution, Consumption and Monitoring Management System is being piloted, and the hi-tech system has meant a more tranquil work regimen for him and his team.

Now, Nhika does not need to physically check his tanks. 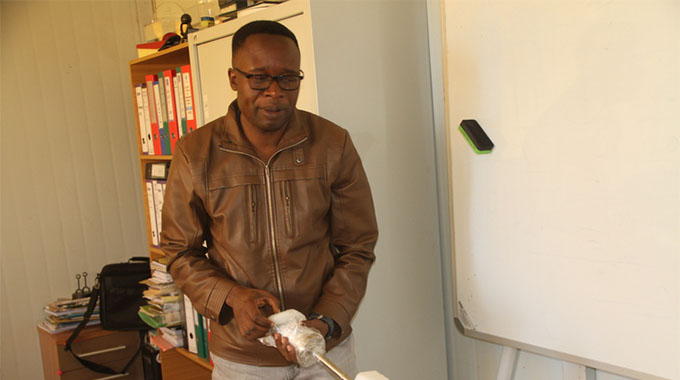 All the data is now recorded digitally and displayed on a small monitor in his office.

Reports are printed with a few clicks on a touchscreen monitor fitted just behind his desk in his small office.

“These days I no longer need to physically check the tanks. All I have to do is check on this small monitor.

“In cases where my bosses require a report, I just click on the screen and immediately a report is printed, showing how much fuel we have in each of our tanks and how much we would have disbursed.

“I can even check how much fuel we have or have disbursed on my cellphone as long as I have internet connection.”

Authorities reckon the shortages are largely a result of hoarding of fuel for prolonged periods by service stations without distributing it in a bid to force price increases, including multiple refuelling per day by unscrupulous motorists.

Having established these two as possibly the main reasons behind the fuel shortages, Government engaged a team of high-tech computer wizards and engineers at the Harare Institute of Technology (HIT) to develop a digital monitoring system for petroleum products.

The result was the development of the Matsimba Fuel Monitoring and Management System, a real-time monitoring system set to be installed at all fuel service stations and fuel tankers in the country.

It is envisaged to curb abuse and leakage of petroleum products.

Nationwide roll-out of the system was approved by Cabinet a fortnight ago and now awaits funding from Treasury.

When fully functional, all haulage trucks transporting fuel in the country will be fitted with trackers and volume-measurement technology to allow for geo-fencing and monitoring the vehicles’ movements and the volume of fuel in individual trucks at any given time.

Further, the system will allow for monitoring of stocks at individual service stations at Zera (Zimbabwe Energy Regulatory Authority) provincial monitoring centres, up to national level where data can be transmitted directly to the Office of the President and Cabinet.

Dr Talon Garikayi, who is a director at Technology Transfer, Licensing and Commercialisation Centre (TTLC) at HIT and responsible for developing the technology, is a young engineer with a passion for solutions.

Dr Garikayi — barely in his mid-thirties and leading a team of much younger computer geeks and petro-engineers at the centre — believes in the efficacy of technology in solving the country’s challenges.

When The Sunday Mail visited the TTLC recently, Dr Garikayi and his team appeared engrossed in the gibberish that was the coding language displayed on their laptop screen, and could barely notice our presence.

This young team believes they have found a solution to Zimbabwe’s perennial challenges with fuel management.

Dr Garikayi said their system was full-proof and will plug all opportunities for corruption and hoarding.

“The first level of what we want to do is to give the service stations capability of knowing what is underground, inside their tanks, at any given time,” said Dr Garikayi. 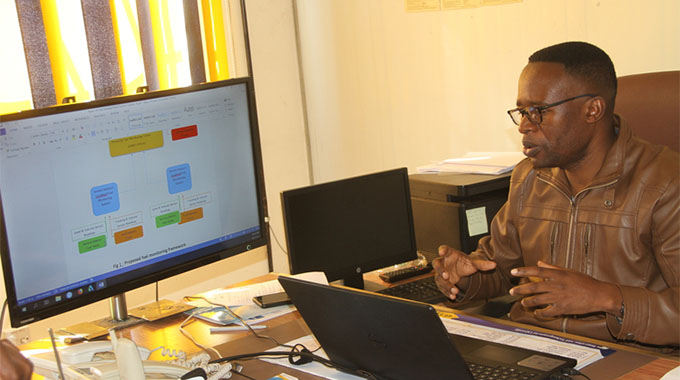 “What is happening currently is Zera officers have to visit a service station if they want to know how much fuel they have, they do that using a dipstick.

“There is no inventory of what transpires at the service station to the extent of not knowing how much fuel was there in the first place.

“So our system has got the capability of telling you when the last load of fuel was delivered at the service station and it can tell how the fuel was actually disbursed.

“If you have got anomalies like having someone refuelling 300 litres at one go, then you would know that a drum was being filled and not a vehicle — all that is recorded digitally.”

He said the second step involves the monitoring of delivery trucks.

All trucks collecting fuel at the local bonded warehouses will be installed with trackers to allow for the system to track their movements.

“Once the cap is closed after collecting fuel, we will know the exact moment it is opened and the vehicle’s movement will be tracked from the moment it leaves the depot through what we call geo-fencing,” he said.

“If the vehicle goes off-route, our system will immediately report through an alarm.

“When the fuel is offloaded at the service station where our Matsimba system is, our system then reports at the exact time the fuel was offloaded and the volumes.

“The system then does automatic consolidation of the amount of fuel offloaded and the amount that remains in the tanker then we clear that delivery.”

He said a localised system installed at service stations records and stores all the data and transmits it to a centralised server for monitoring and planning.

“And for planning purposes, Matsimba has data analytics module embedded in it for artificial intelligence . . .

“It means that when we have cases where one province has a surplus of fuel, trucks can be redirected in real-time to those where there are shortages. . .

“In reality, this is what we call industry 4.0 and the internet of things.”

Apart from the fuel management system, Matsimba is also behind Zupco’s electronic payment system that seeks to introduce cashless payment for commuters.

Government, which is now deliberately promoting the development of home-grown solutions for local problems, believes that support for embryonic tech developers could nurture a local Silicon Valley (innovation hub) of sorts, where local innovators will flourish and create wealth in the process.

“Remember, we supported the Matsimba guys when they did the Zupco e-ticketing system; that was Government’s initiative,” said Prof Murwira.

“We are building an innovation hub at HIT and that is basically to support such developments by our scientists — because HIT is not a mass university.

“That is what we are calling Education 5.0, whereby the fourth leg of that is innovation, with industrialisation being the fifth.

“So, basically, what HIT is doing is what Government is doing. “The development model that we are taking is where we believe the country can only develop based on the brains of its people.

“This is how all developed nations were built and that is the route we are going as well.”

Government is in the process of re-purposing local education towards innovation, technical ability and problem-solving.