Source: MDC-A Women Denounce Marry Chiwenga “Harassment And Torture” Full statement by MDC Alliance Assembly of Women Spokesperson Barbara Tanyanyiwa calling for an end to gender-based violence against women. END GENDER-BASED VIOLENCE AGAINST WOMEN The MDC Alliance Assembly of Women notes with concern the increased incidence of gender-based violence which has become a hallmark of […] 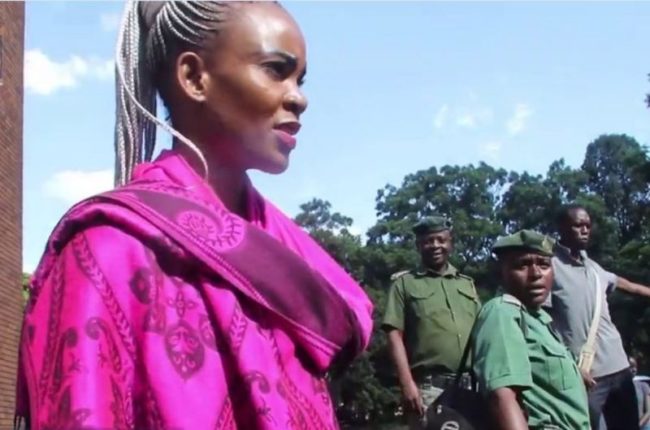 Full statement by MDC Alliance Assembly of Women Spokesperson Barbara Tanyanyiwa calling for an end to gender-based violence against women.

The MDC Alliance Assembly of Women notes with concern the increased incidence of gender-based violence which has become a hallmark of Mr Mnangagwa’s regime.

The most recent example of the regime’s toxic culture of abusing women and weaponizing the law against them is the harassment and torture of Marry Chiwenga, the estranged wife of Mr .

The case of Marry Chiwenga and her persecution at the hands of law enforcement agents is a sad indictment on the law enforcement system and the state’s failure to respect women’s right to dignity and fair and equal treatment before the law.

There can be no doubt that the settling of political scores on behalf of powerful political elites is behind the continued abuse of this woman and her continued unlawful alienation from her children.

As we approach the 16 Days of Activism against Gender-Based Violence, we call upon the authorities and indeed wider society to reflect carefully on what the case of Marry Chiwenga represents for the cause of women’s rights in our nation.

As her health condition deteriorates, no justifiable basis has been put forward to support the decision to allow her to seek adequate healthcare and treatment abroad.

The capricious and arbitrary decision by the Magistrates’ Court to detain her for a “medical examination” echoes the ill-treatment that was meted out against MDC Alliance MP, Hon Joana Mamombe, when she was unjustly incarcerated by the same court.

More recently, Vongai Tome was sexually harassed by a police officer when she was attending the court hearing for Makomborero Haruzivishe.

The perpetrators of the abduction, sexual assault and torture of the MDC Trio of Joana Mamombe, Cecilia Chimbiri and Netsai Marova are still at large.

To date, there has been no accountability for these acts of sexual and gender-based violence against women which has become a hallmark of Mr Mnangagwa’s regime.

We demand an end to the weaponization of the law against women and call for Marry Chiwenga’s right to dignity and protection of the law to be upheld.

We further demand that there be accountability for previous cases of gender-based violence against women including the cases of the MDC Trio and Vongai Tome.

Under an MDC Alliance government, women of all tribes, colours, political persuasions and creeds will be treated with dignity and protected by the law.