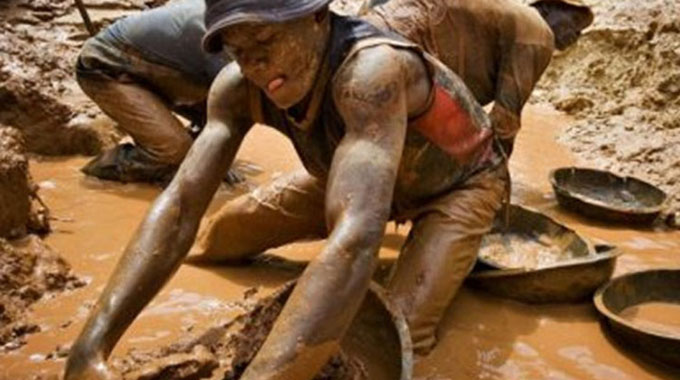 ESTABLISHED mining companies should make a tribute agreement with prospective small-scale miners as part of formalising their operations, a mining official has said.

At least 1,5 million artisanal miners operating in the country are not registered.

The call comes after a nationwide police blitz, which has seen nearly 2 000 illegal miners arrested in gold-rich parts of the country.

The small-scale mining sector has been a major contributor to the country’s total gold output, yet  operations of such miners have long been stigmatised and largely viewed as informal.

According to Fidelity Printers and Refiners, the ASM sector in 2018 produced 22 tonnes out of the total 34 tonnes produced, representing a 65 percent contribution.

“We are supporting the Government’s  initiative to arrest machete gangs to bring normalcy in the mining sector, unfortunately artisanal miners are being affected,” he said.

“We are going to engage Government and other stakeholders on how their operations can be formalised.

“As of now, any illegal miner is arrested, hence we are engaging all stakeholders to ensure that those who have been affected are back at work to support their families and contribute immensely to the country’s economy.

“We expect some big corporate mining companies to make a tribute agreement with small-scale miners in their respective provinces to bring back normalcy in the sector.”

Mr Takavarasha said 84 percent of the artisanal miners were not registered.

“We are having strategic meetings to ensure that their operations are formalised,” he said.

“We were very happy that the police took a very decisive and firm stance against machete gangs,” he said.

“Those are criminals tormenting people in our communities. That position is really commendable.

“As the representatives of the youths, we made a statement on the stance taken by the police, but there is need to separate these criminals from small-scale miners.

“Majority of young people, particularly in rural areas, they do not have any other source of income besides mining. They survive on small-scale mining.’’

The Ministry of Mines and Mining Development, said Cde Matutu, should speed up the processing of prospective licences to small-scale miners so that they carry on with their mining activities.

Cde Matutu said they are embarking on awareness campaigns countrywide to educate small-scale miners on the need to cooperate with the police to weed out machete gangs.