Robert Mugabe is now lying in state at a football stadium in Zimbabwe’s capital Harare. 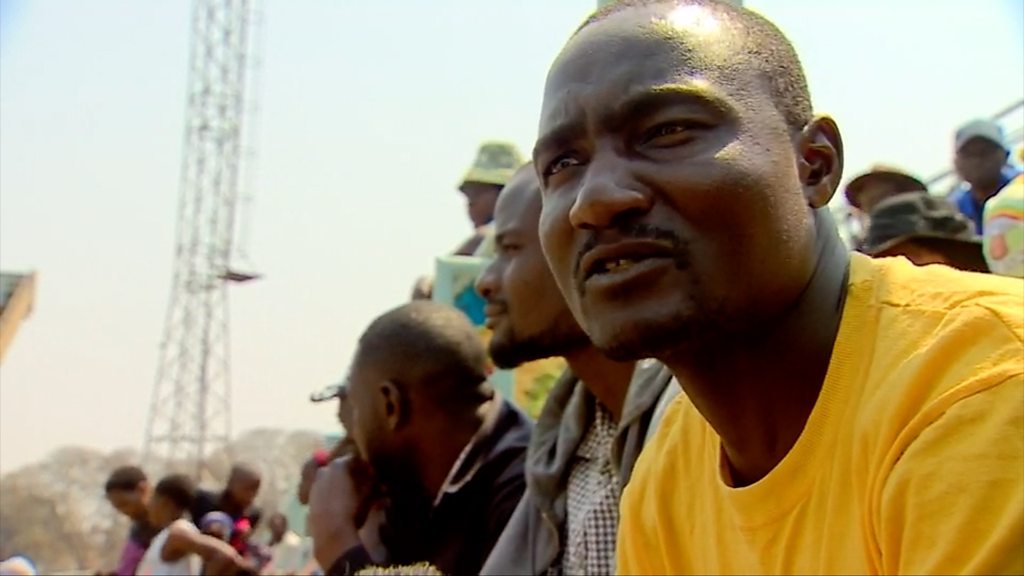 Robert Mugabe’s family say they are shocked at not having been consulted by the government about arrangements for the funeral of the former Zimbabwean president.

Mr Mugabe, who was 95, died last week while undergoing medical treatment in a Singapore hospital.

His body is now lying in state at the Rufaro football stadium in Zimbabwe’s capital, Harare.

His family and the government disagree over Mr Mugabe’s final resting place.

Mr Mugabe’s family says his body will be displayed in his home village of Kutama on Sunday night, and will be buried at a private ceremony.

Thousands of mourners are queuing up at Rufaro stadium to pay their respects to Mr Mugabe.

There was a brief stampede as people rushed forward to catch a glimpse of the former leader, Reuters news agency reported.

Trust Nyakabawo told Reuters at the Rufaro stadium: “We are in pain after his death because we were so used to seeing him alive as a father figure that led the country well.”

Rufaro Stadium is where Mr Mugabe was sworn in as Zimbabwe’s first leader in 1980.

“His body will lie in state at Kutama on Sunday night… followed by a private burial – either Monday or Tuesday – no National Heroes’ Acre [the national monument for liberation heroes]. That’s the decision of the whole family,” his nephew Leo Mugabe told the AFP news agency.

President Emmerson Mnangagwa had declared Mr Mugabe a national hero after his death, indicating he should be buried at the national monument.

The family has prevailed and Zimbabwe’s former president, Robert Mugabe, will be buried in his rural home.

This is a final snub to his former comrades. It is not unprecedented: other national heroes have declined to be buried at the Heroes Acre national shrine in Harare, but not one of Robert Mugabe’s stature.

Speaking at her mother’s funeral last year, Grace Mugabe expressed her desire to reconcile with President Emmerson Mnangagwa, the man who ultimately prevailed in the pair’s battle to succeed Mr Mugabe as president, with the help of the army. But this decision could strain relations and widen the rift.

In Harare’s Rufaro stadium hundreds of mourners in the regalia of the governing Zanu-PF party have arrived. There is a jubilant mood.

But most of the people I spoke to are Mugabe supporters. One woman supported the family’s decision for a private burial.

“The way they got rid of him was not right, it was cruel,” she said.

Another mourner said she believed the former president needed to be buried with his family rather than with his comrades.

Education Minister Paul Mavhima says there is no doubt Mr Mugabe should be buried as a national hero.

“Such an icon, one whose funeral service is going to be attended by almost 50 current and former heads of state. Such a founding father of this country, there should never be a discussion about that. There should never be any conflict whatsoever. The decision should be clear, he should go to the national shrine,” he told the BBC.

In a statement, the Mugabe family said it was extremely concerned over the way the authorities had made funeral plans “without consulting his immediate family who were tasked with communicating his last wishes in regard to his funeral and burial”.

“We have also observed with shock that the government of Zimbabwe is attempting to coerce us to accept a programme for the funeral and burial of the late Robert Gabriel Mugabe which is contrary to his wishes on how he wished to have his mortal remains interred.”

The statement adds that one of the late leader’s final wishes was for his wife, Grace Mugabe, to never leave Mr Mugabe’s casket during the funeral up until the point when he is buried.

Mr Mugabe’s family is said to be bitter over him being ousted by his former ally Mr Mnangagwa two years ago.

Mr Mugabe fired Mr Mnangagwa in 2017, in what many believed was a way to prepare for Mrs Mugabe to succeed him.

His body was flown back to Zimbabwe from Singapore on Wednesday. It was later taken to Mr Mugabe’s Harare villa, known as the Blue Roof, where family and supporters gathered to mourn.

It will lie in state at Rufaro football stadium for two days, ahead of the state funeral on Saturday.

Who was Robert Mugabe?

Mr Mugabe was Zimbabwe’s first leader after the country became independent in 1980. He held on to power for almost four decades before being ousted in the 2017 coup.

During his early years, he was praised for broadening access to health and education for the black majority.

However his later years were marked by violent repression of his political opponents and Zimbabwe’s economic run. An increasing number of critics labelled him a dictator.

He seized land from white owners in 2000.

Mr Mugabe famously declared that only God could remove him from office.

In 2017 he was placed under house arrest and four days later, replaced as the leader of his party Zanu-PF by his former vice president, Emmerson Mnangagwa.

Mr Mugabe initially refused to resign. But, on 21 November, as a motion to impeach him was being debated in the Zimbabwean parliament, the speaker of the House of Assembly announced that Robert Mugabe had finally resigned.

Mugabe negotiated a deal which protected him and his family from the risk of future prosecution and enabled him to retain his various business interests. He was also granted a house, servants, vehicles and full diplomatic status.