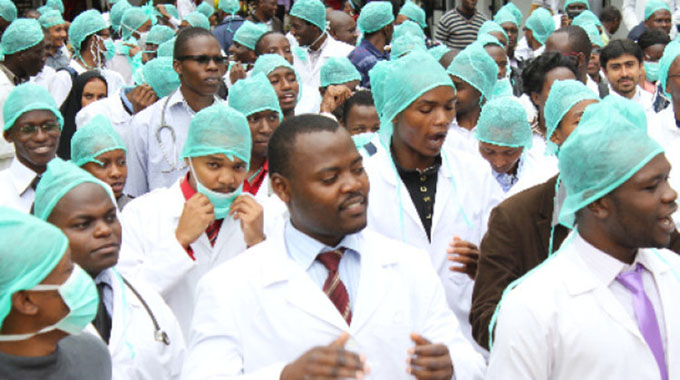 PATIENTS at the country’s two major referral hospitals — Parirenyatwa Group of Hospitals and Harare Central Hospital — have welcomed the return to work of most junior doctors, saying it will go a long way in alleviating people’s suffering.

All the 68 junior doctors at Parirenyatwa Group of Hospitals were back at work yesterday.

The hospital’s public relations officer, Mr Linos Dhaure, confirmed the return of all their doctors.

“The last group to report for duty came yesterday (Thursday),” he said. “We will give you further information as it becomes available.”

When The Herald visited Parirenyatwa Hospital, some of the doctors were attending to patients in different sections.

At Harare Central Hospital, no official comment could be obtained as the hospital’s chief executive, Dr Tinashe Dobbie ,was said to be locked up in a meeting with the hospital’s trustees.

Mr Wilbert Muchata from Mutandahwe Village in Chipinge South whose son, Knowledge, is admitted at Parirenyatwa Group of Hospitals, said he had been praying for normalcy to return to the hospital.

“My son is about to be amputated after suffering an injury at school in March,” he said. “At first, it was said to be a small laceration, but the wound was not healing, resulting in him being referred here.

“We have been here for the past two weeks and at least there is hope that he will soon be attended to. These are our major hospitals and there should be a lot of activity here.”

At Harare Hospital, Ms Lorraine Mahoso, who was at the children’s hospital, said although her child had been attended to, her challenge was on getting the prescribed drugs.

“My major worry is where to get some of the prescribed drugs. At one time I was told to source them at our local clinic in Epworth, but I failed to get them.”