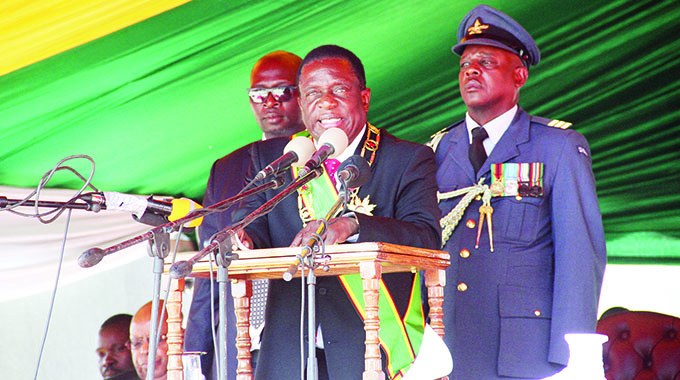 Zvamaida Murwira Senior Reporter
President Mnangagwa yesterday honoured individuals, corporates, religious organisations and diplomats for their efforts in the provision of humanitarian support aimed at mitigating the effects of Cyclone Idai in Manicaland Province and parts of Masvingo early this year.

The conferment of the awards was made at the National Heroes Acre during the commemoration of Heroes Day.

Some individuals and organisations honoured include the United Nations represented by Ambassador Bishow Parajuli, Dean of African Ambassadors accredited to Zimbabwe and Democratic Republic of Congo Ambassador, Mwawapanga Mwanananga.

The two were conferred with the Zimbabwe International Friendship Award in Gold for mobilising the international community to offer humanitarian assistance.

Some of the honoured corporates included Bitumen World represented by Mr Andre Zietsman and Fossil Contracting through Mr Ronald Mashura.

The companies were some of the first to be on the ground with relief, providing access roads after infrastructure was destroyed.

They were honoured with the Jairos Jiri Humanitarian Award for their efforts.

The citations were read by Secretary in the Office of Vice President Kembo Mohadi, Reverend Paul Damasane.

On Ambassador Parajuli, Rev Damasane said the diplomat raised collaboration and co-operation between the UN system and the Government to new heights.

“He displayed exceptional leadership ability under conditions of extreme urgency when he marshalled and coordinated with zeal the UN agencies in response to the Cyclone Idai disaster and that restored hope in the face of such unprecedented destruction.

“Mr Bishow Parajuli has indeed projected UN as a true friend of the people of Zimbabwe and a dependable pillar of support along their transformative journey towards vision 2030.”

Ambassador Mwanananga was conferred with the gold medal on behalf of all the countries that assisted Harare.

“Please Sir, accept on behalf of all the members of the global family of nations who provided to Zimbabwe at its hour of extreme need, this token of our sincere gratitude for the invaluable assistance,” said Rev  Damasane.

Other individuals were conferred with the Zimbabwe Bravery Award for their rescuing operations.

“They rescued people trapped by mudflows and rockfalls in the Ngangu extension, ferrying of cyclone survivors to safe shelter for first aid treatment, venturing into the epicentre of the disaster, crossing flooded rivers to rescue marooned victims and establish contact with the outside world and above all in the process sacrificing their lives in rescuing operations,” said Rev Damasane.

For those conferred with the Jairos Jiri Humanitarian Award, Rev Damasane said they rendered humanitarian assistance during and after the Cyclone.

“The remarkable actions they did include: transporting desperate cyclone victims to hospitals under difficult weather conditions and at times using rudimentary means, extracting the critically injured and deceased under massive boulders that had crushed them, conveying dead bodies for burial, providing emergency shelter, first aid and water to cyclone victims, coordinating with district authorities concerning the disaster thereby triggering rescue operations, coordinating the district civil protection committee and other agencies on the ground in rescue operations, sourcing and distributing necessities, mobilising resources for the burial of deceased persons, providing their own resources such as blankets and curtains to wrap the deceased and those rendered naked by the devastating cyclone.

“Mobilising youths for the digging of graves and burial for Cyclone idai, donating cash, fuel and shelter and using person air transport to facilitate for the bringing of the first doctors for the cyclone,” said Rev Damasane.