Source: Prosecutor-General under fire | Newsday (News) BY BLESSED MHLANGA A ZANU PF-aligned civic society organisation #308 has written to the Justice ministry, National Prosecuting Authority and the Judicial Services Commission (JSC) calling for an investigation into the conduct of Prosecutor-General (PG) Kumbirai Hodzi whom they allege has failed to discharge his duties. The organisation, […]

The post Prosecutor-General under fire appeared first on Zimbabwe Situation. 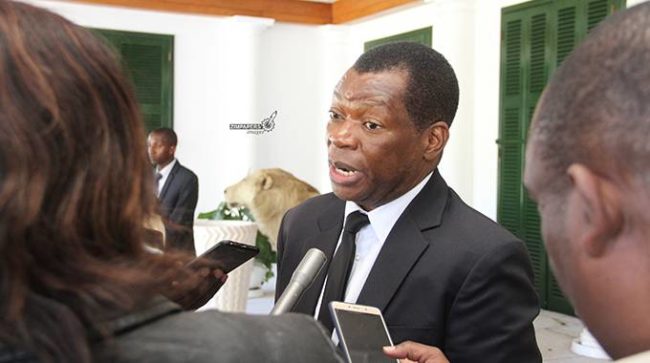 A ZANU PF-aligned civic society organisation #308 has written to the Justice ministry, National Prosecuting Authority and the Judicial Services Commission (JSC) calling for an investigation into the conduct of Prosecutor-General (PG) Kumbirai Hodzi whom they allege has failed to discharge his duties.

The organisation, which is fronted by Eden Mandava in a letter to Hodzi, said the admission by the PG of the existence of cartels which he claimed were controlling the NPA, judiciary and police was a clear indication that he had failed to discharge his constitutional mandate.

Mandava is a national executive member of Zimbabwe Congress of Students Unions, a Zanu PF-linked group.

“Honourable sir, your admittance that truly cartels exist, that corruption is sinking the economy is a clear sign that in your capacity as the PG you have failed… we found it disturbing to hear that you alleged lack of co-ordination as a reason why corruption is growing yet the Constitution of Zimbabwe section 260(11) gives you the power to deal with these issues,” Mandava wrote.

The Constitution gives the PG powers to direct police to investigate any acts that might constitute a crime, with the view of establishing the facts and taking action.

#308 demanded that Hodzi tells the nation what action he has taken to ensure that he breaks the cartels other than singing about it.

“We kindly seek clarity on whether or not that was done before we take action as citizens of Zimbabwe against your words. This is because we found such sentiments as inciting the citizens of Zimbabwe to sympathise with you against all the other departments. We do not know whether you understand actions that can follow your sentiments and how such can be politicised,” the letter read.

Highly-placed sources said the statements by the PG have caused some discomfort in the corridors of power and #308 was being used as a front to send a clear message that he could be pushed out if he continued to be reckless with his speech.

Justice permanent secretary Virginia Mabiza said she had not officially received #308’s letter but became aware of it through social media.

“I have not officially received the letter maybe because I am out of office, but I am aware that there is concern over statements attributed to the PG, which he has also been on record denying of having said. We are yet to get to the bottom of it,” Mabiza said.

MDC leader Nelson Chamisa on Monday said Hodzi’s statement exposed the anti-corruption crusade by President Emmerson Mnangagwa was nothing but a façade and rhetoric which will not achieve anything.

“The anti-corruption rhetoric is a mere facade designed to hoodwink Zimbabweans and the world. Over the past two years, the level of corruption and State capture has escalated to obscene levels. There cannot be sustainable prosperity when national wealth is in the hands of a few,” he said.

“It is a call to action when the country’s Prosecutor-General confirms that cartels have captured State institutions. This reflects a captured and compromised State and that the regime is not fit for purpose. Politics aside, we must now unite in this big fight against corruption.”

The post Prosecutor-General under fire appeared first on NewsDay Zimbabwe.

The post Prosecutor-General under fire appeared first on Zimbabwe Situation.