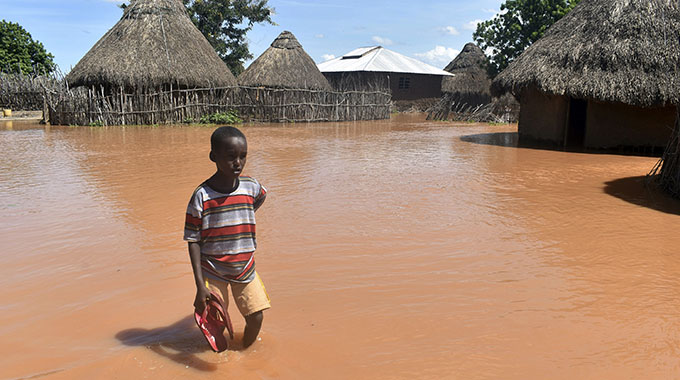 THE Southern African Development Community is strengthening regional capacities for preparedness and effective response to disasters through undertaking regional assessments and the provision of early warning services.

This comes as floods are wreaking havoc in Zimbabwe and Tanzania, leaving a trail of destruction. Tanzania is trying to come to terms with one of the worst natural disasters which has left more than 40 people dead.

Zimbabwe is grappling with the effects of the flash floods in areas like Binga (Matabeleland North), Chimanimani (Manicaland), parts of Mashonaland Central, Mashonaland West and Masvingo provinces.

The floods claimed one life in Chinhoyi on Tuesday after a resident, Livemore Soja, was swept away while trying to cross the flooded Rusununguko Bridge in Rusunguko high-density suburb. His body was discovered 8km away near Hanyani River on Thursday.

In a statement, SADC executive secretary, Dr Stergomena Lawrence Tax, said the extreme weather events continued to weaken the region’s resolve to increase the resilience of communities as their magnitude and severity exceed nations’ capacities to effectively deal with them.

“SADC notes with great sorrow and sadness the death of over 40 people with some still missing, and the damage caused by heavy rains and flooding following torrential rains in the Lindi, Mwanza, Morogoro and Manyara districts (in Tanzania),” she said.

“The floods have also resulted in the destruction of 1 750 houses, displacing 15 000 people, 8 000 of whom are in temporary shelters. Furthermore, the heavy rains and floods have caused destruction to roads, bridges, schools and hospitals and damaging 495 acres of farmland with unconfirmed number of livestock killed or injured across the affected areas.

“SADC reiterates its call for both regional and global efforts to mitigate our carbon footprint that exacerbates global warming and consequently climate change in line with the Paris Agreement on Climate Change and the Sendai Framework for Disaster Risk Reduction (2015-2030).”

Rains started subsidising in most parts of Zimbabwe yesterday as forecasted by the Metrological Services Department.

Department of Civil Protection director, Mr Nathan Nkomo, said there were no reports of major incidents received yesterday, but they remained on high alert.

In Mbire, Zimbabwe National Water Authority reported that water levels in Musengezi and Chidodo rivers were significantly rising and chances of flooding were high.

The water authority said the levels recorded on Thursday afternoon were at six metres while the threshold is seven metres.

“The Mbire CPU and World Vision intervened and helped the affected families with blankets, cooking utensils, maize and exercise books among other things,” he said.

Mr Chiringa said most of the rivers like Hoya, Musengezi and Nzoubvunda were flooded and areas like Chiwenga, Mutemaungu and Kairezi were not accessible.

“We are continuously monitoring the situation,” he said. “We are also grateful for the support we are getting from the national office which availed money for the monitoring exercise. We are also appealing for assistance from development partners and well-wishers for us to assist all the affected families. Generally, the rains have subsidised, but we will remain on high alert.”