Source: Talk of dialogue without action betrays insincerity of principals – NewsDay Zimbabwe December 24, 2019 guest column:Learnmore Zuze IT IS becoming apparent with the passage of every day that the much-hyped talks between Zanu PF and MDC Alliance remain just but a storm in a teacup. The hype keeps harping on the talks, but […]

The post Talk of dialogue without action betrays insincerity of principals  appeared first on Zimbabwe Situation. 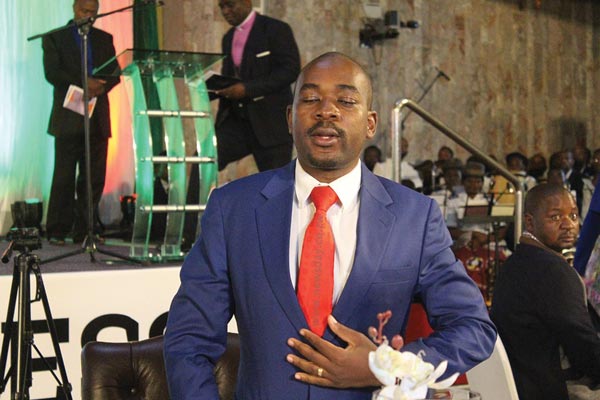 IT IS becoming apparent with the passage of every day that the much-hyped talks between Zanu PF and MDC Alliance remain just but a storm in a teacup. The hype keeps harping on the talks, but little remains in the way of action and what exactly is to be achieved by this national dialogue or its discourse.

Zimbabweans easily rank as the most troubled souls in southern Africa for the past two decades due to a cocktail of political and economic crises. At this juncture, Zimbabwe can no longer continue to have “talks about talks” when the country has been engulfed by flames.

The subject continues to ring with indignation in various media, but it is imperative that a holistic approach is adopted.

The tattered economy raises emotions and naturally people would want to see stability in the economy at the soonest possible moment, but the question remains as to whether two ideologically opposed political parties can form a functional government.

The Political Actors Dialogue must be vehemently opposed if its only objective is to provide succour to failed political parties. What Zimbabwe needs are real influential principals who would propel the nation towards the urgently needed stability.

Former South African president Thabo Mbeki was recently in the country, but what we still have are “talks about talks” which Zimbabweans can barely afford to entertain at the moment.

Various entities continue to chorus the pressing need for the MDC Alliance leader Nelson Chamisa and incumbent President Emmerson Mnangagwa to meet in dialogue. Feeling the pinch, even business executives in the country have called for a national dialogue to address the challenges facing the country. The United States, early this year added its voice, saying the talks should be mediated by a neutral arbiter. In the opening remarks of the 6th CEO Africa Roundtable conference in Victoria Falls this year emphasis was made on the need for collective action to address the country’s challenges.

Church leaders as well have voiced the urgent importance of the talks as the economy titters on the brink of collapse.

The MDC Alliance has consistently failed to meet for the purported dialogue outlining conditions before the commencement of dialogue.

It is undeniable that the country’s challenges need to be addressed collectively, but it doesn’t seem to be occurring to those calling upon this initiative what exactly is meant to be achieved by this much talked about dialogue. Are governments of national unity sustainable? How far can they go? Do they offer lasting solutions?

Dialogue is very critical, but it is more critical to appreciate what precisely the point of the talks is. Could it be that both principals are aware of the futility of dialogue leading to the feet-dragging? Do the talks seek to amalgamate the major political parties as happened between Zanu PF and PF Zapu in 1987? Is the objective to have a Government of National Unity (GNU) as happened between Zanu PF and MDC-T in 2009? Many people in modern times will recall the stability that immediately followed after Tsvangirayi consented to the GNU, but the burning issue is how long it lasted. The framework for the called-for dialogue between Mnangagwa and Chamisa seems vague; the only thrust is on economic revival, but how exactly should this be achieved given the gigantic political ideological differences between the two parties?

Already, in an apparent show of how this dialogue is likely to end, Nelson Chamisa, at one time, described the proposed dialogue as “meaningless” insisting that Mnangagwa’s government should halt the arbitrary arrests and persecution of his party members.

While we may all clamour for dialogue between Chamisa and Mnangagwa, it is vital that we start with the end in mind. Chamisa and Mnangagwa wield polar opposite political ideologies and it is precisely this fact that the talks may work in the interim, but troubles are sure to follow as happened between the late former
Prime Minister Morgan Tsvangirayi and deposed late President Robert Mugabe.

Under intense pressure, Tsvangirayi forged an alliance with Robert Gabriel Mugabe, but the deal went awfully wrong along the way. Tsvangirayi, as the chief minister in Government, was disrespected by Mugabe’s ministers.

He kept being insulted. Without clarity as to purpose, we risk having a replica of the scenario which played out in the so-called “marriage of convenience” between Tsvangirayi and Mugabe. The process did not start with the end in mind.

Zimbabwe has been here before; they have seen it all. Zimbabweans know what GNUs finally lead to. The road is littered with impediments.

The rivalry between Mugabe and Tsvangirayi came back renewed with vigour after the collapse of the GNU. It is for this reason that a plausible objective must be set out regarding the dialogue.

Zimbabweans have suffered for a long time and no longer need piecemeal solutions to their prolonged suffering.

If this dialogue is to have meaning and yield a positive outcome, then there is more that should be looked at than simply the urgent need to stabilise the economy. The culture of having State resources being used to repress the masses must truly end.

The post Talk of dialogue without action betrays insincerity of principals  appeared first on Zimbabwe Situation.