We should not take Mnangagwa’s claim that he is working to further democracy and human rights in Zimbabwe at face value. Source: The hypocrisy of Emmerson Mnangagwa | Human Rights | Al Jazeera Mnangagwa should not be allowed to ‘greenwash’ his government’s damaging actions or blame everything that is still wrong with the country on […]

We should not take Mnangagwa’s claim that he is working to further democracy and human rights in Zimbabwe at face value. 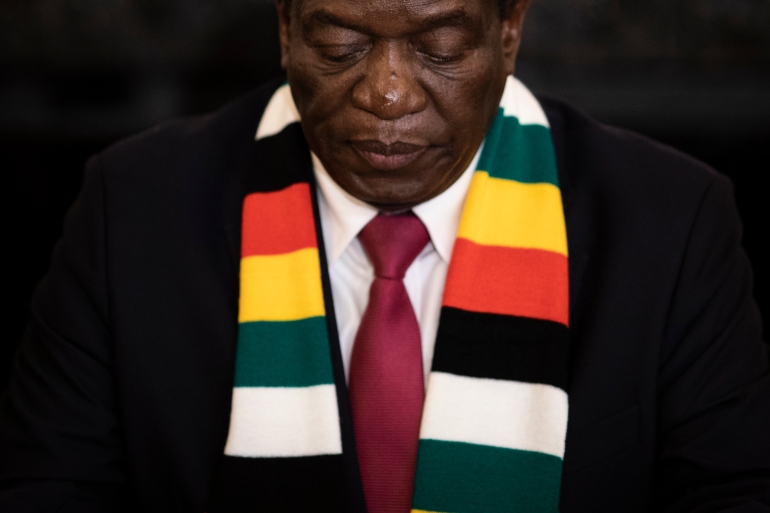 Since becoming the president of Zimbabwe in November 2017, despite repeatedly paying lip service to calls for democratic reform, Emmerson Mnangagwa did little to further human rights and democratic freedoms in the country. Instead, his government deepened Zimbabwe’s economic struggles, enabled endemic corruption, fuelled instability, and targeted opposition figures, rights activists and journalists to strike fear into a restive population.

This is why I was shocked and angered to see him claim in a November 14 article for Al Jazeera that sanctions by the EU and US on Zimbabwe are the main obstacles in front of his government’s progressive agenda.

In the article, under the pretext of expressing Zimbabwe’s intent to tackle climate change, Mnangagwa painted an impressive picture of his government’s actions and intentions, saying his government has plans for making Zimbabwe “a middle-income country by the end of this decade, helping thousands out of poverty, stimulating innovation and once again allowing Zimbabwe to play a leading role on the African continent.” He went on to argue that his government has already achieved great progress since coming to power “and addressed many of the reforms asked of us, including providing compensation to landowners who had their properties expropriated in the 2000s, and tackling corruption”.

But there is a wide gap between this progressive rhetoric and the reality on the ground.

Under Mnangagwa’s leadership, corruption once again emerged as a primary obstacle to economic stability and democratic progress in Zimbabwe. In February, the Daily Maverick published an explosive report accusing the president of enabling corruption and state capture for financial and political gain. “Among others, illicit cross-border financial transactions cost Zimbabwe up to a staggering $3-billion a year and billions in gold and diamonds smuggled out of the country,” the report said. “It is estimated that Zimbabwe may lose up to half the value of its annual GDP of $21.4bn due to corrupt economic activity.” The report concluded that politically connected “cartels” are perpetrating these illicit activities and that President Mnangagwa, despite his public anti-corruption stance, is “one of the cartel bosses whose patronage and protection keeps cartels operating.”

There is also ample evidence that, despite constantly advertising its support for Black Indigenous farmers, the Mnangagwa government is not doing much to protect them. In fact, the Zimbabwean state continues to grab Black Indigenous-owned farmlands with impunity to this day. In March, for example, the government approved the eviction of more than 13,000 Shangaan people from their ancestral lands in the Chiredzi District to pave the way for lucerne grass farming. The objections of the villagers, supported by many local and international human rights organisations, fell on deaf ears.

All in all, contrary to the picture Mnangagwa painted in his article for Al Jazeera, the greatest impediment to Zimbabweans exercising their fundamental human rights is not foreign sanctions, but the actions of Mnangagwa himself and his ruling ZANU-PF party.

Indeed, since taking over the presidency, Mnangagwa’s callous disregard for democracy and human rights reached such levels that many Zimbabweans grew nostalgic for his predecessor Robert Mugabe, who ruled the country with an iron first for 37 years.

For example, in August 2018, Zimbabwean soldiers and police, deployed under Mnangagwa’s “verbal” orders, killed six unarmed civilians during post-election protests. The government swiftly instituted an international commission of inquiry – headed by former South African President Kgalema Motlanthe – to investigate the incident in an effort to demonstrate its commitment to human rights and justice.

The commission concluded its work in December 2018, finding that officers used “unjustified and disproportionate” force against protesters, and recommended that soldiers and police responsible for the killings be disciplined. However, to date, not a single junior or senior police or army officer has been charged or reprimanded for these killings.

Worse still, the government has disregarded many of the Motlanthe Commission’s noble recommendations. The families of those who were killed, and people who suffered physical injuries, have not been compensated. The laws relating to hate speech, abuse of cyberspace and incitement to violence, which the government routinely uses to intimidate and arrest pro-democracy activists like Hopewell Chin’ono, Makomborero Haruzivishe and Job Sikhala, have not been reviewed. And no amendments have been made to the Electoral Act since the 2018 general election.

Unsurprisingly, the state-sanctioned killings did not end after this dark chapter in 2018. As reported by Human Rights Watch, Zimbabwean security forces killed 17 people and raped 17 women during protests against a 150-percent hike in fuel prices in January 2019. At the time, Mnangagwa’s spokesman George Charamba tried to justify the deaths, and even told the state-controlled Sunday Mail newspaper that “the response so far is just a foretaste of things to come.”

Regrettably, Charamba has been proven right many times over in the past two years.

In May 2020, two female activists for the opposition MDC party and a member of parliament were reportedly abducted, tortured and sexually assaulted by state security agents. This prompted United Nations human rights experts to call on Harare “to immediately end a reported pattern of disappearances and torture that appear aimed at suppressing protests and dissent”. Predictably, Mnangagwa’s administration ignored that request.

In August 2020, state agents abducted suspected activists and arrested opposition lawmakers on the eve of planned protests against government corruption. Twenty-two-year-old student Tawanda Muchehiwa, who was abducted from a hardware store by about 15 men in plain clothes, for example, was tortured for two days and left with life-changing injuries. The government took no action to bring those responsible for such abductions to justice or answer any questions about the alleged role the state played in these crimes.

So, yes, it is commendable that Mnangagwa is committed to “tackling climate change” and “reducing emissions by 40 percent before 2030”, but we should not take his claim that he is working to further democracy and human rights in the country at face value.

Today, Zimbabweans are wrestling with the devastating consequences of not only climate change, but also economic mismanagement, corruption and political repression, for which Mnangagwa is responsible. Therefore the president should not be allowed to “greenwash” his government’s damaging actions or blame everything that is still wrong with the country on EU and US sanctions.

Economic and political sanctions were imposed on Zimbabwe in the early 2000s in reaction to widespread human rights abuses and lawlessness authorised by the ZANU-PF government of the time. Sadly, today, a new ZANU-PF government is in charge but Zimbabweans are still suffering from similar abuses.

On October 11, a convoy carrying opposition leader Nelson Chamisa was attacked by suspected ruling party supporters. Chamisa was not injured, but his close protection officers sustained injuries. While such an attack on an opposition politician was not out of the ordinary for ZANU-PF and its supporters, it sent a clear message to the world: The future of Zimbabwean democracy is still uncertain. Indeed, there are well-placed fears that Zimbabwe will experience another bout of government-orchestrated repression in the run-up to the 2023 elections. And there is every chance that a disputed election might prompt further isolation for a nation ravaged by extreme joblessness, poverty and economic instability.

Before calling on the international community to lift sanctions, the Mnangagwa government should start genuinely working towards cleaning up its act, implementing extensive democratic reforms, enabling a progressive political environment and a strong human rights culture.

How do we move forward if our government remains enamoured by the selfish, violent and regressive ways of the past? We can only but ask the African Union, the Southern African Development Community, the UN and the international community at large to challenge Mnangagwa’s attempts to greenwash his government’s crimes and compel him to value our lives and respect our economic, democratic and human rights.

The views expressed in this article are the author’s own and do not necessarily reflect Al Jazeera’s editorial stance.