Source: Tobacco farmers must stop deforestation | Herald (Opinion) Logs of wood stocked up for tobacco curing Obert Chifamba Agri-Insight Inasmuch as the land reform programme conducted at the turn of the millennium liberated land that had been previously appropriated by a few individuals to allow hundreds of thousands others to access it, it also set […] 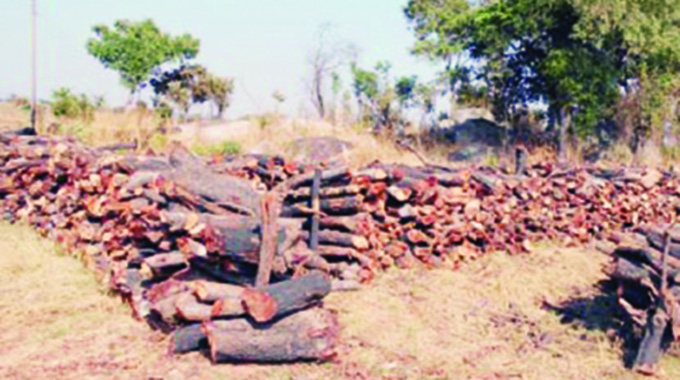 Logs of wood stocked up for tobacco curing

Inasmuch as the land reform programme conducted at the turn of the millennium liberated land that had been previously appropriated by a few individuals to allow hundreds of thousands others to access it, it also set the stage for the new entrants to switch from their traditional cash crops to new ones.

Tobacco, for instance, became the farmers’ new cash cow with many of them using the experience of growing the crop they had gained as farm workers for the few white farmers that used to grow it.

It was rewarding, with most of the debutant farmers getting decent yields that saw them transform their socio-economic realities for the better almost overnight.

Soon, there was an influx of new growers, and for the first five or so seasons, pressure on critical resources such as wood for curing the crop was not yet felt, and not many realised that the forests from which they were extracting the wood were taking a severe battering.

Today, the bulk of these forests are pale shadows of the fortresses of nature they used to be with the biggest trees gone leaving them brutally dissected by makeshift roads that farmers use as they harvest the wood, which they stack at their homes in huge piles that they even fail to exhaust in one season in most cases.

This has seen tobacco farming mutate from being a vehicle of economic empowerment to a double-edged sword that props one aspect of the farmers’ lives, while savaging the other.

The environment has been silently bearing the brunt of these farmers’ actions, as trees that used to protect the soil, provide home to millions of other ecologically important creatures, and most importantly, partake in the maintenance of good climatic conditions are fast being depleted.

Deforestation has been blamed for being an auxiliary to current climate change problems.

It will not require rocket science to see that tobacco farming has become one of the leading causes of deforestation and environmental degradation — effectively giving the likes of brick moulding and gold panning a good run for their money in the race to assume pole position as the chief agent in the destruction of forests.

The sad reality is that farmers do not seem to realise that their glory is headed for an end if they do not act to replenish the forests that have been nursing their huge appetite to make money.

Many stakeholders in the tobacco industry have tried to come in with ways of educating and arming the farmers with resources for afforestation, but this does not appear to be yielding any results.

The Tobacco Research Board (TRB), for example, has for a long time been conducting lessons for aspiring tobacco farmers, enlightening them on the dangers of deforestation, and giving them gum tree seedlings at the completion of the trainings.

The dawning reality is that most of the farmers, if not all, are not planting the trees or maybe planting, but not taking care of them leading to their demise.

A stroll in any direction where there are tobacco farmers will show how the farmers have decimated forests in their line of business every year.

The bulk of once-imposing forests have been reduced to semi-deserts, devoid of wildlife inhabitants and trees.

Forests are at their most vulnerable state, especially during this time of the year when tobacco is being reaped and cured in readiness for the market.

I would bet my last coin that every homestead where tobacco is grown has stacks of logs as we speak waiting to be used in the process of tobacco curing.

If only farmers could transfer the industry with which they chop down trees to replanting them.

TRB, in its noble cause, has introduced model barns that do not consume a lot of wood for tobacco curing but more than three quarters of the farmers have remained stuck to their old models that chew up tonnes and tonnes of firewood every season.

And that wood is coming from the same forests that they used since they adopted the crop more than a decade ago now.

Very few, if any, have established woodlots from which they are extracting wood for tobacco curing.

Organisations such as the Forestry Commission of Zimbabwe have come up with afforestation programmes meant to rehabilitate the environment that has been torn apart by human activities, but they do not seem to be finding willing partners in the game.

According to the Forestry Commission, the country has a forest resource covering approximately 45 percent of its surface area.

Sadly, 330 000ha of these forests are lost annually to a variety of factors, including clearing of land for agricultural expansion, settlement expansion, infrastructure development, firewood collection and tobacco curing.

The above statistics essentially mean that the country faces the risk of becoming a desert very soon and with the current deforestation rates, we are just a few years away from a situation where major tobacco growing areas will have no trees left.

The environmental impact of the small-scale growers is as alarming and unsustainable, as more than 5,3 million trees are being cut down each year, according to experts.

There is no doubt that close to 90 percent of these farmers use wood for tobacco clearing, which essentially means that they need trees every season, yet they do not seem to be caring to replace those that they are cutting down.

It is, however, exciting to note that some contractors are including coal in their packages, as a way of reducing total reliance on firewood by farmers, although their gesture is not making much impact as the quantity is little while the farmers are also not making any effort to supplement the coal with theirs.

Of course, it is expensive for individual farmers to go and buy coal from Hwange and transport it to their farms, but they can always form groups and share the costs.