GOVERNMENT’S move to pay civil servants a United States dollar allowance may stimulate economic activity in the short-term, but will expedite re-dollarisation, economic analysts have said. 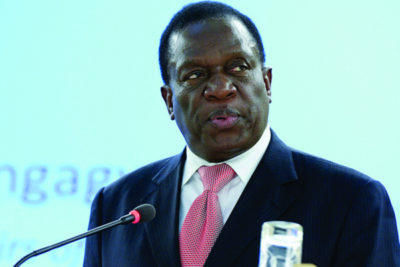 Government this week announced a 50% increment in Zimbabwean dollar salaries, a US$75 Covid-19 allowance and a US$30 pension for the next three months.
President Emmerson Mnangagwa’s administration has been under pressure to increase salaries following an outcry over skyrocketing prices for goods and services stemming from the collapsing Zimdollar and runaway year-on-year inflation which reached 785,55% in May.

The country outlawed the use of the US dollar last year, reverting to a mono-currency regime after a decade of multiple currency usage.
However, the Zimdollar has lost value significantly, trading at 80 against the US dollar on the parallel market.
Economist Christopher Mugaga said by promising civil servants a US dollar-denominated allowance for the next three months, the government has created a crisis of expectation.

“They are telling the civil servants to go and open nostro accounts. Who is going to fund those nostro accounts? (Reserve Bank governor John) Mangudya is on record as saying the country does not have enough foreign currency,” he said.
Civil servants and government pensioners were advised to immediately open US dollar-denominated nostro accounts with their banks to facilitate the payments.
The Civil Service Commission (CSC) has about 170 000 workers while the Health Services Board has about 30 000 employees, according to CSC secretary ambassador Jonathan Wutawunashe.

“They have actually created a crisis of expectation, which is disastrous. What will they do after three months? It’s a move which shocked everyone. I think the decision was hastily made. By so doing, they have also expedited the re-dollarisation of the economy. We are actually leaving the multi-currency regime,” Mugaga, who is also chief executive of the Zimbabwe National Chamber of Commerce, said.

He said the government is likely to print more money to fund the civil service wage bill, stoking inflation.
As a way forward, the government should liberalise the market, he said.

An economic analyst who declined to be identified described the move as problematic, likening it to a grand heist.

“For instance, there are about 500 000 civil servants, including the security sector. If each of them deposits US$15 to open a nostro account, banks will have a total of US$7,5 million hard cash. Government will then raid that money like it has been doing. What a grand scheme!” the economist said.
Some banks also charge US$5 a month in maintenance fees, meaning civil servants will not get full value for their money.

However, economic analyst Reginald Shoko said the move by Finance minister Mthuli Ncube will stimulate economic activity.
“The clever thing Mthuli has done is that they will not give out hard cash. This will stimulate economic activity locally,” he said. “However, in the long run, it will force the government to fully dollarise the economy, something which they are not ready for as we do not have enough capacity to generate foreign currency. We mostly rely on commodity exports and diaspora remittances.

“Government should properly manage the foreign currency exchange to stabilise the local currency.”
George Charamba, Deputy Chief Secretary to the President and Cabinet (Presidential Communications) posted on Twitter that: “The USD75 allowance is flat across all grades. The USD75 will not come in notes form; it will be a purchasing electronic card to ensure this enhanced buying power does not feed the white market and allows money to circulate within the formal monetary system!! So do not expect cash disbursements.”

Economic analyst John Robertson said if what Charamba said was true, then the civil servants would be very disappointed.
“Apparently, George Charamba has confirmed that the US$75 civil servants allowance will not be paid in cash, but in RTGS form, so what they can spend will be 75 times the exchange rate on the day. With the auction setting the rate from next week, that rate will move from 25 to some other number that might move every week,” he said.

“The US dollars in cash appear not to have been on the cards at all, but I can imagine the civil servants will be disappointed to receive a transfer into their EcoCash account or bond notes instead. I’ve heard a suggestion that tokens, exchangeable at OK (supermarkets), perhaps, will be the way they do it. All very unclear at present,” Robertson said.

Already, civil servants have rejected the salary review, with the Progressive Teachers’ Union Zimbabwe describing it as unacceptable, grossly insufficient and procedurally defective.

“Indeed, the quantum and process are fundamentally baffling and defective. What teachers want is not a salary increase but restoration of their purchasing power parity or payment of US$550 that they used to earn in 2018,” the union’s president, Takavafira Zhou, said.

“On paper the government offered civil servants US$75 risk allowance but in reality it’s just US$25 as civil servants will not be allowed to withdraw that amount as hard currency, but will have to liquidate this at the prevailing bank rate, which today is US$1:ZWL$25,” he said.
Teachers said the permanent panacea to the current salary quagmire was payment of US$550.
Currently, the lowest paid government worker earns about ZW$3 000 before deductions while the monthly low-income urban family budget for a family of six rose to ZW$8 725 last month, according to the Consumer Council of Zimbabwe.

The post ‘US dollar allowance to stimulate economic activity’ appeared first on The Zimbabwe Independent.