Source: What has happened to the 16 June 1976 Soweto Uprising revolutionary spirit in today’s Zimbabwe youths? – The Zimbabwean For a very long time, whenever I see the world-famous picture of the lifeless Hector Pieterson, being carried by a crying fellow female schoolmate – fleeing from a volley of fatal bullets being fired at […]

The post What has happened to the 16 June 1976 Soweto Uprising revolutionary spirit in today’s Zimbabwe youths? appeared first on Zimbabwe Situation.

Source: What has happened to the 16 June 1976 Soweto Uprising revolutionary spirit in today’s Zimbabwe youths? – The Zimbabwean

For a very long time, whenever I see the world-famous picture of the lifeless Hector Pieterson, being carried by a crying fellow female schoolmate – fleeing from a volley of fatal bullets being fired at protesting South African high school students by the brutal apartheid security forces, on 16 June 1976 – I never cease wondering whatever happened to such a fearless revolutionary spirit in today’s generation of children. 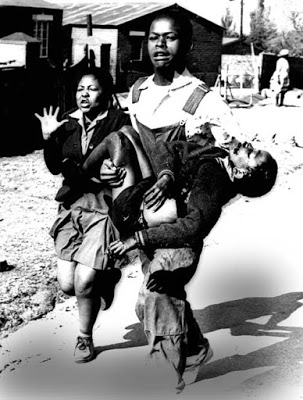 The actions of that day, by these gallant students in Soweto – who were protesting against the imposition of the teaching of all subjects in Afrikaans in their schools (largely regarded by the black majority of that country as the language of oppression), as well as against all other repressive apartheid laws – further galvanized other students throughout that country to fearlessly stand up.

Such valiant actions by what many would have regarded as mere children – who would have been expected to be more concerned with simplistic issues as courtship, dating, and the latest fashion trends, music and movies – and the subsequent, brutal and horrendous response by security forces, signalled the internationalization of the fight against apartheid – thereby, moving the liberation struggle to a whole new advanced level.

In fact, what these students did, is widely believed to have been the real catalyst that led to the eventual global imposition of tighter restrictions, and increased pressure, on the apartheid regime – resulting in the freedom of the majority of South Africans in 1994.

Even today, 44 years after such brave acts by those students – who dared confront the guns and bullets of the heinous apartheid regime, yet knowing and comprehending fully well the death and destruction they would face – that day (16 June) is commemorated globally as World Youth Day. 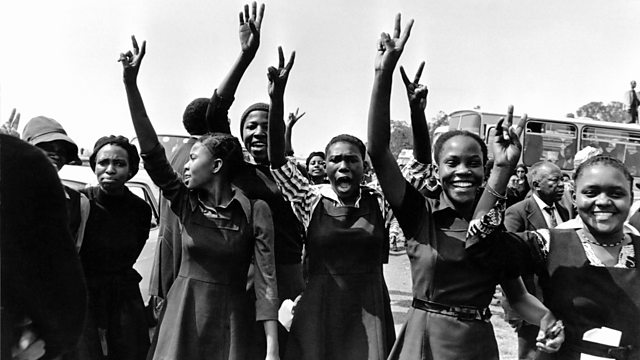 However, what we have so tragically witnessed over the decades is the apparent dilution and emasculation of this day – as today’s young people are no longer being taught and inculcated the real spirit of the revolutionary students of South Africa in 1976, who dared stand up against their own repressive, savage, and sadistic regime, which had wantonly brutalized not only themselves but also their parents, through heinous ruthlessness and laws.

These students had witnessed how the majority of their compatriots had been subjected do a degrading and inhuman livelihood, whilst a very few at the top enjoyed lavish lifestyles. They had seen how the majority were forced to struggle and toil each and every day for a paltry wage, just to put food on the table, whilst their oppressors could afford world-class buffets – seemingly without breaking a sweat.

They had been unwilling witnesses to their parents’ sobbing heart-rending tears, as they could not afford to provide them with decent education – yet, children of those in power would be attending some of the most expensive, and best-equipped schools in the land, which opened up unending opportunities for their futures. Whilst, on the other hand, the suffering majority’s children were trapped in a vicious cycle of poverty.

These students had had enough of living in ramshackle houses, whose roofs even leaked during the rainy season – as their parents could not afford decent dwellings, due to the economic disenfranchisement of the majority – yet, those of the political elite, and their cronies, lived in palaces and mansions, that were only comparable to those they watched on television as belonging to the world’s rich and famous.

“Enough is enough!”, I am sure they told themselves – and decided that only they, as the youth, had the power to change the situation in their country… once and for all. They refused to blindly and sheepishly accept that this was their fate, and would be the life of the majority of their country’s people for generations and generations to come.

They had to take a firm stand, not only for their parents – whom they loved so much, and fully appreciated the tribulations they were facing each day, at the hands of their cold-hearted and callous regime – but, also as a guarantee for their own brighter future…full of prospects and opportunities regardless of what one wanted to become – as opposed to those apartheid days when the only way out of the dungeons of poverty was probably becoming a musician.

Therefore, when they finally decided to face off against their repressive regime – fully cognisant of the heavy-handed and fierce response they would encounter – nothing was going to stop them, except death itself.

The choice for these students was straightforward – it was either they suffered a slow, but equally agonizing death, as slaves and second-class citizens in their own motherland, or they faced the devil himself, and either die quickly, or vanquish him…once and for all – finally freeing themselves, and their parents, from the shackles of subjugation.

It certainly was not a simple decision to make, but – I am sure – it was one they absolutely were sure was the right one to make.

However, today, this true spirit of revolution is kept hidden from our youth – simply because our current leaders, especially here in Zimbabwe, are made from the same mould as the colonial and apartheid oppressors of yesteryear – and as such, would never want to raise another generation similar to the “Class of 1976”. They are terrified of such a prospect.

That is why, even though we in Zimbabwe commemorate 16 June as “World Youth Day”, this has, however, been confined to such issues is child marriages, child abuse (especially on the domestic front), access of sanitary wear for the girl child, and other such issues.

As much as all these issues are obviously of paramount importance, and should never be trivialized or placed in the backseat, the issues of socio-political dynamics prevailing in this country need to also take centre-stage. If this country is to have any hope for a brighter tomorrow, our youth should be even more politically savvy and revolutionary than those of 1976 – as the “people’s enemy” of yesteryear was more conspicuous by his or her skin colour than the “people’s enemy” of today, who looks just like you and me.

In fact, the “people’s enemy” that the majority are faced with today, is our former liberator, and so can easily continue to pretend as “having our best interests at heart” – yet, he or she already morphed, in true “Animal Farm” style, into the likeness and image of our erstwhile colonial and apartheid oppressor. The only difference between the oppressor of yesteryear, and that of today, is the skin colour.

As such, Zimbabwe desperately needs a breed of “16 June 1976 youth”, who are not brainwashed into believing that – just because they have a so-called “Children’s Parliament” and “Junior City Councils”, or the enactment of cosmetic laws against child abuse, then all is well.

We now need a thinking youth – who can fully understand, and adequately explain, why his or her parents are unable to pay their school fees, or send them to the best schools, or buy them sufficient essential school material, or even provide them with decent meals.

We need a youth who thinks beyond his or her own narrow domain of dating, chatting on social media, and listening to music – but, a real “leader of tomorrow”, who comprehends what is truly happening in the country, and where this is all going – unless they courageously immediately put a stop to it.

They should know that if their parents are suffering today – yet, the situation only started seriously deteriorating one or two decades ago – then they have an even grimmer future ahead…which will make the tough times we are facing today, appear as if they were actually a “paradise on earth”. Our youth have no future at all!

The only hope that they have is to take their heads out of the cloud of deception they currently exist in, and realize the gravity of the situation this country is under. That is why, it was so refreshing, on 20 January 2020, to learn about the resoluteness and heroism of Njube High School students, when they demonstrated against the suffering in this country.

Just as I had lost all hope in this generation of youth – believing them to be nothing but empty vessels, with no vision, wisdom, or purpose – these Njube students reignited that hope, that indeed, the revolutionary spirit still exists.

Nonetheless, real change can never come through one act of bravery, but now is the time to spread this spirit to all our youth. Just as in the apartheid days, those Soweto students were not inculcated this spirit by their government – as that would have been downright insane, for the oppressor to teach the oppressed to wake up and rise up.

As most of us may have watched in such movies as “Sarafina”, teachers and parents play a very pivotal role in educating and enlightening our children. This should not be limited to narrow and shallow concepts of mathematics, science, and so forth – but, broader issues that will raise their awareness on their socio-political history, and current affairs, as well as the way forward in breaking these shackles of poverty and oppression.

That is why I do not have enough words to commend the Njube High School teacher who showed beyond a shadow of a doubt, that he was truly visionary, by instilling in his students the sense of responsibility for this country’s wellbeing, the welfare of their parents, and protecting their own futures.

Such remarkable work now needs to urgently be carried out by all parents and teachers to our children. They are with us most of the time – in our homes, and in our classrooms – and as such, we have no excuse whatsoever in failing.

We neither should teach violence, nor savagery – but, peaceful resistance, the likes of which we so proudly witnessed with the Njube High School, and Soweto students. History has always shown that the oppressor is the only one who believes in violence – as he or she has everything to fear.

However, as the valiant sons and daughters of apartheid South Africa showed us on 16 June 1976, when confronted with repression and hopelessness, the only thing we need to fear is fear itself – as we have so much more to gain by fervently and fearlessly standing up against any regime or junta, no matter how ruthless it is.

That’s why this went down in history and is today commemorated throughout the world – as only a coward is soon forgotten, but the daring will always be remembered.

The struggle for positive peaceful and democratic change in Zimbabwe should not be – and can never be – relegated to political and civic society leaders alone – as that has never yielded results, anywhere in the world – but, a deliberate concerted effort by every peace-loving, prosperity-aspiring, forward-thinking, and development-oriented member of this country.

There is no one who does not have a pivotal role to play. Each one of us – young or old, teacher or student, worker or unemployed, employer or employee, man or woman, educated or uneducated, leader of an organization or ordinary citizen – is a crucial part of the whole body of peaceful resistance and change.

As failure to do so, would be a failure on us all as the people of Zimbabwe.

The post What has happened to the 16 June 1976 Soweto Uprising revolutionary spirit in today’s Zimbabwe youths? appeared first on Zimbabwe Situation.