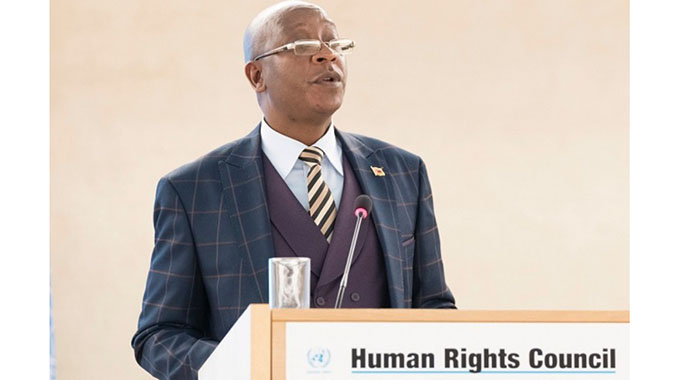 Speakers described former President Mugabe as a principled man who fought for the emancipation of African people from the yoke of colonial bondage.

Zanu-PF Mashonaland West provincial chairman Cde Ziyambi Ziyambi said they were happy with the turnout of people in the province who bid farewell to the national hero.

“As the provincial party leadership, we are happy with the turnout. The body of the late African icon will lie in state at his rural home before being airlifted to Harare tomorrow.

“We were supposed to come here yesterday, but having deliberated and having consulted the former First Lady Grace Mugabe we all realised she was very tired and very weak and we gave ourselves one day to rest after consulting with the family,” he said.

He added that the proceeding went according to plan as the people were waiting to bid farewell to their son.

“This morning we started the proceedings very well.

“The body arrived this morning and it was immediately taken here in Murombedzi so that the people of Zvimba can bid farewell to the founding Father.

“We have heard speeches from the minister and the provincial leadership and followed by body viewing from the people and we expect to have a night vigil and thereafter his body will be taken back to Harare tomorrow.

“The turn up of people is good, because when we had body viewing in Harare we also brought buses from Mashonaland West to ferry people to Harare for the first viewing on Thursday.

He hailed the former First Lady for taking care of the former President.

He said that Cde Mugabe’s nephew Patrick Zhuwao shouldn’t misdirect his anger to the Government.

“He has misdirected his anger. The Government has been looking after our Founding President and the Cabinet would brief us about his condition even when he was travelling. We were taking care of his welfare even when he passed on, the President immediately despatched a plane to ferry him back and he had sent money there to ensure that all the logistics that are needed are catered for,” he added.

Minister for Mashonaland West Mary Mliswa described Cde Mugabe as an African giant who put Zimbabwe on the world map.

“The country is now on the world map because of his contribution in the global arena, such as the United Nations Summit, African Union summit fighting for the rights of Zimbabweans and Africa at large,” said the minister.

“The former President was a unifier in the political arena,” she said.

“As you can see, people from all walks of life are gathered here to bid farewell to one of their own,” said Minister Mliswa.

The body of the national hero is expected to be airlifted back in Harare today.