ZIMBABWE Republic Police (ZRP) has paid more than ZWL140 000 as compensation to a Harare woman who was tear-gassed by some law enforcement agents three years ago. Source: Negligent ZRP pays the price for tear-gassing woman – The Zimbabwean Fifty eight year-old Mavis Muzari was left nursing injuries and hospitalised at Parirenyatwa Group of Hospitals […]

ZIMBABWE Republic Police (ZRP) has paid more than ZWL140 000 as compensation to a Harare woman who was tear-gassed by some law enforcement agents three years ago. 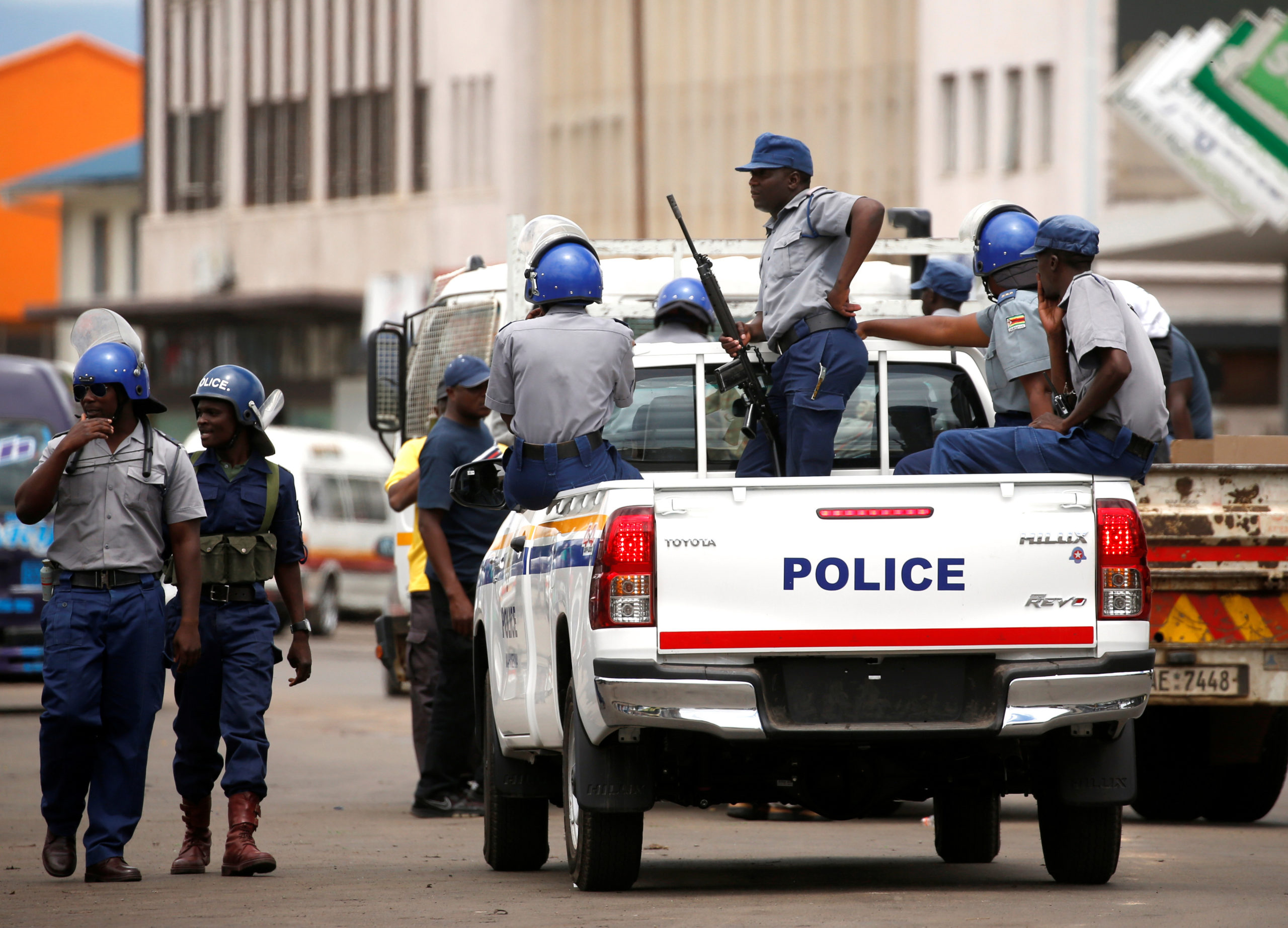 Fifty eight year-old Mavis Muzari was left nursing injuries and
hospitalised at Parirenyatwa Group of Hospitals after four slipshod
ZRP officers indiscriminately threw a teargas canister inside a
commuter omnibus which landed on her lap.

As a result of the negligent police conduct, Muzari was left bleeding
from her nose, suffered high blood pressure, sustained serious injury
to her foot including some bruises and felt pain all over her body.

This compelled her to engage Tinashe Chinopfukutwa of Zimbabwe Lawyers
for Human Rights in 2019 to sue ZRP Commissioner-General Godwin
Matanga and Home Affairs and Cultural Heritage Minister Hon. Kazembe
Kazembe for damages amounting to ZWL142 170 for violation of her
fundamental rights including loss of income, pain and suffering,
embarrassment, humiliation and future medical expenses.

Since 2019, ZRP and Hon. Kazembe had vacillated to compensate Muzari
and in 2021 she filed an application at the High Court seeking an
order for contempt of court against Hon. Kazembe and Matanga and
asking them to comply with the Harare Magistrate Court’s decision
compelling them to pay a judgment debt of ZWL142 170.

Now, Matanga and Hon. Kazembe have evaded serving jail time after the
law enforcement agency notified Chinopfukutwa and provided proof of
payment indicating that it had settled Muzari’s judgment debt.

Muzari is the latest person among dozens of people who in recent years
have won compensation from ZRP after suing for damages arising from
the violation of their rights as a result of the wayward conduct of
some police officers in the execution of their law enforcement duties.

Source: Mangwana Justifies Govt Plans To Buy Heavy Weapons From Indonesia – ZNN The permanent secretary in the Ministry of Information, Publicity and Broadcasting Service, Nick Mangwana, said that the country needs more heavy weapons to capacitate the Zimbabwe Defence Forces (ZDF). He tweeted on Monday: So why do we have a Ministry of Defence […] 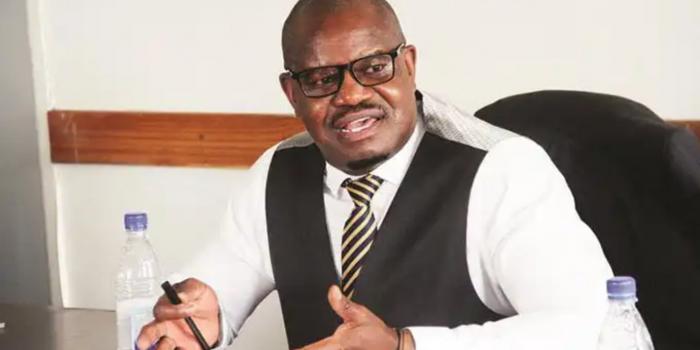 The permanent secretary in the Ministry of Information, Publicity and Broadcasting Service, Nick Mangwana, said that the country needs more heavy weapons to capacitate the Zimbabwe Defence Forces (ZDF). He tweeted on Monday:

So why do we have a Ministry of Defence if we can’t equip the soldiers? Hanti (Definitely) we need to be able to defend ourselves? #MoreZvombo (#MoreWeapons).

It is worrying that the regime in Harare would want to buy arms as a priority for a country with so many urgent problems when it is not at war.

We are not Somalia. We have relative stability, so the country doesn’t need arms as a top priority.

The real challenge is the economic crisis due to a political situation flowing from a lack of legitimacy for Mnangagwa’s leadership.

Mr Mutasa Daniel Nemukuyu Investigations Editor WOMEN are the major victims of the illegal grab of property in inheritance matters, a sad situation attributed to the patriarchal nature of society, the Master of the High Court, Mr Eldard Mutasa, has said. In an interview, Mr Mutasa said when husbands die, widows go through a lot, […]

Daniel Nemukuyu
Investigations Editor
WOMEN are the major victims of the illegal grab of property in inheritance matters, a sad situation attributed to the patriarchal nature of society, the Master of the High Court, Mr Eldard Mutasa, has said.

In an interview, Mr Mutasa said when husbands die, widows go through a lot, trying to defend family assets, worse still, when the woman would not have given birth to children in the marriage.

Some are even chucked out of their homes while others lose everything to greedy relatives.

In cases where there are only children left as beneficiaries, there are attempts to disinherit the girl child on the basis that she will later get married elsewhere.

“Statistics have revealed that the female gender is the most affected when it comes to inheritance matters.

“Investigations into why women constitute the highest percentage of victims of loss of property show that the problem can be traced back to the patriarchal nature of Zimbabwean society which is skewed in favour of the male gender,” he said.

The common practice in Zimbabwe is that properties acquired in marriage are ordinarily registered in the name of the husband, not the wife.

Women are rarely registered as owners of property despite having contributed to the acquisition of the property, even by marriage.

However, if wives die, men do not struggle to claim what is rightfully theirs and statistics show that women are the biggest victims of illegal property grab.

In an urban set up, Mr Mutasa said, women face challenges of being chased away from the matrimonial home by greedy relatives especially in circumstances where the surviving spouse had no children with the deceased.

“In a rural set up they face challenges of being chased away from the rural home and communal land by relatives especially in circumstances where they refuse to be “inherited”.

Sadly, out of ignorance of potential negative consequences of their actions, some women voluntarily offer to have the property that they would have exclusively contributed towards its acquisition, to be registered in their husband’s name.

This, in most circumstances, can be a suicidal move as the “generous” wife may fail to inherit the property upon death of the husband.

Harare lawyer, Ms Jacqueline Sande, who deals with inheritance cases, said women must be empowered enough to make their own financial decisions and buy properties in marriages.

“This shows that women are still very marginalised. They are not empowered enough to make their own financial decisions and buy their own properties in a marriage set up. The majority of women still rely on men to be the provider and the breadwinner for the family.

“When financial decisions are made in the purchase of properties, they are excluded. When they try to asset their rights at court it becomes difficult because they don’t know how much the property cost, they don’t know where it was purchased and they cannot even prove that the property exists.

“Women will be at a disadvantage and they are unable to prove that they contributed to the acquisition of the property.

“Women need to asset their rights in a family set up. They need to be aware of what is happening in terms of finances. Even if you are not going to work, that does not mean you are not contributing to the family’s finances. You will be contributing indirectly,” said Ms Sande.

She added: “Women should ensure that their names are included in the registration of the properties to prevent property grabbing by others.”

In the event of the man’s death, the erstwhile wife will resurface and claim everything on the basis of a monogamous marriage which, at law, will be still valid.

“Some are facing challenges of finding out that their spouse was married before under Chapter 5:11 and did not formally divorce but just separated with the first wife.

“The existence of this marriage therefore invalidates any other marriage, causing loss of inheritance rights to the other woman.

“Men are not formally divorcing. They go on to marry another wife while the first marriage still subsists, causing inheritance problems,” Ms Matsvayi said.

Women who are customarily married, according to the ZWLA boss, may struggle to prove the union due to the absence of a marriage certificate.

“Many women are married under unregistered customary law unions where they don’t have marriage certificates. In order to prove that they were married, they have to rely on the family of the husband for confirmation and therein lies the problem,” she said.

“Women may be disadvantaged by some retrogressive cultural norms in terms of which property is registered in the name of the husband only. One solution is progressive estate planning like writing wills and family trusts as well as ensuring that joint names of husband and wife are registered on property.”

A legal expert, Mr Obert Mawadze, said most women were ignorant and they must be educated on how to protect their rights in deceased estates.

“Firstly, a lot of women are ignorant and are not aware of how to secure their interests and rights as surviving spouses in deceased estates .

“Secondly, some are taken advantage of by unscrupulous relatives and some crooks who masquerade as lawyers,” he said.

Mr Mawadze said corruption and underhand dealings in the administration of estates may also disinherit women.

“Cases of corruption and underhand dealings cannot be ruled out in government offices wherein the rightful beneficiaries are duped. These transactions usually take the form of unscrupulous executors working in cahoots with officers in such respective offices to purvey their underhand transactions.

“Fraud also plays a part where greedy relatives sometimes use forged documents to defraud surviving spouses and beneficiaries of their stake in deceased estates,” he said.

Mr Mawadze urged officers at the Master of the High Court and other relevant departments to be more diligent in vetting papers submitted to them to curb fraud in estates.

Source: Seven people die as Zupco buses collide head-on | The Herald Crime Reporter Seven people died while 32 others were injured this morning after two Zupco buses collided head-on along the Harare-Chirundu Road. The accident occurred around 7.45am at the 101km peg. National police spokesperson Assistant Commissioner Paul Nyathi confirmed the accident. “The ZRP […]

Seven people died while 32 others were injured this morning after two Zupco buses collided head-on along the Harare-Chirundu Road. 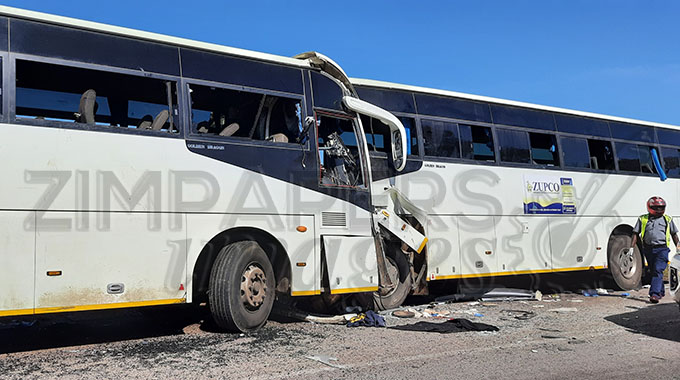 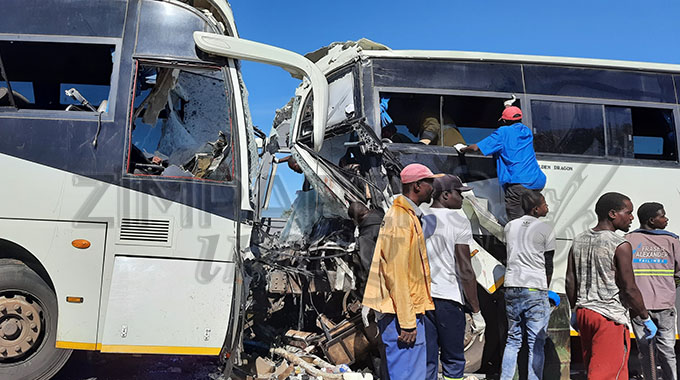 “The first ZUPCO bus tried to overtake a haulage truck on its way to Banket whilst the other ZUPCO bus was proceeding in the opposite direction. Both drivers died on the spot and were trapped under the buses while five passengers died and were taken to Chinhoyi Provincial Hospital for post-mortem. 32 passengers sustained serious injuries and are receiving treatment at the same hospital,” he said. 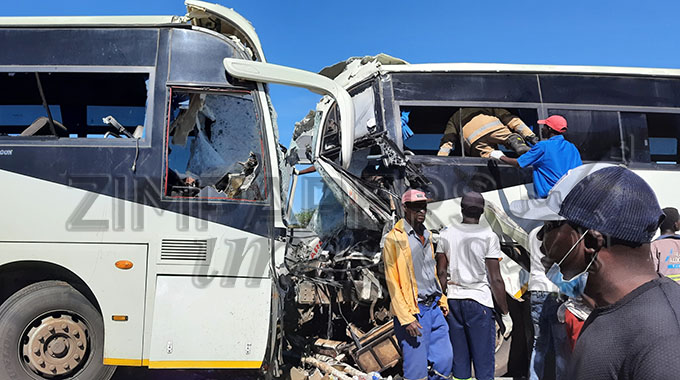 The haulage truck driver is said to have tried to warn the driver of the Banket-bound bus by sounding his horn but the bus proceeded to overtake.

One of the survivors, William Mutimutema said both buses were speeding.