Source: Alleged Limpopo serial killer abandons bail bid — The Citizen During his appearance in court, the suspect – who confirmed he was in SA illegally – said he wanted to tell the truth about his alleged crimes. Themba Prince Willards Dube in the Seshego Magistrate’s Court. He faces seven counts of kidnapping and seven […]

During his appearance in court, the suspect – who confirmed he was in SA illegally – said he wanted to tell the truth about his alleged crimes. 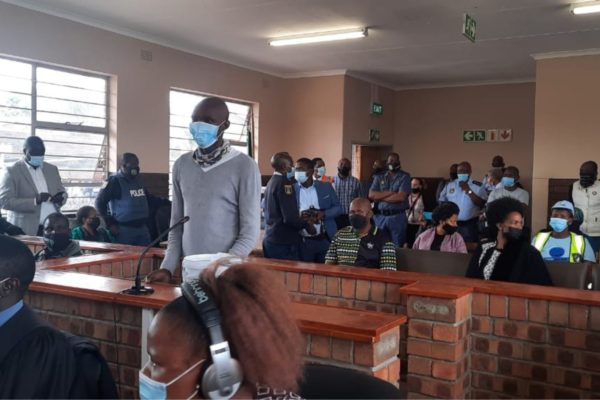 A 36-year-old man arrested in connection with the murders of seven women, whose bodies were found dumped in and around Polokwane in Limpopo, on Monday abandoned his bail application.

Themba Prince Willards Dube made a brief appearance at the Seshego Magistrate’s Court on multiple charges including kidnapping, murder, rape, defeating the ends of justice and robbery.

During his appearance in court, Dube confirmed that he is a Zimbabwean national and that he was in South Africa illegally.

He told the court that he wanted to tell the truth about his alleged crimes and said he doesn’t want legal assistance from legal aid.

The bail hearing was attended by non-governmental organisations (NGOs) and several community members – including the Minister in the Presidency for Women, Youth and Persons with Disabilities Maite Nkoana-Mashabane and Limpopo social development MEC Nkakareng Rakgoale – who called for the court not to release the suspect on bail.

According to Limpopo police, the suspect was initially arrested for possession of a suspected stolen cellphone which police later established, through investigations, that it belonged to a woman who was kidnapped in Lebowakgomo last month.

Police investigations soon led to the discoveries of the seven bodies of women dumped at different locations in Seshego, Polokwane, Mankweng and Westenburg.

The victims were positively identified by their next of kin but police said forensic investigations were underway to conclusively determine the bodies’ identities.

It’s understood that the suspect lured his victims with the promise of giving them jobs.

The following victims were identified by police:

Police investigations were continuing to determine if the suspect could possibly be linked to other cases.

The case was postponed to 27 January 2022 for further investigations.

Police have appealed to anyone who might have a family member missing around Seshego, Mankweng, Lebowakgomo, Polokwane and surrounding areas to contact the investigating officer, Warrant Officer Joel Seroka, on 083-1010-499/079-994-3353 or their nearest police station.