Africa Moyo
Zimbabwe has moved into a potentially defining moment in terms of enforcement of the 21-day lockdown, with a heavy police and army presence on all roads leading into central Harare today, following worryingly large numbers of people this week.

All passengers are asked to produce letters from employers indicating they are part of the skeletal staff manning offices and/ or factories during this period.

The town is literally deserted with a few people seen walking on to the streets and some getting into supermarkets. Pick n Pay (Jason Moyo Branch) is one of the few shops open in the CBD. 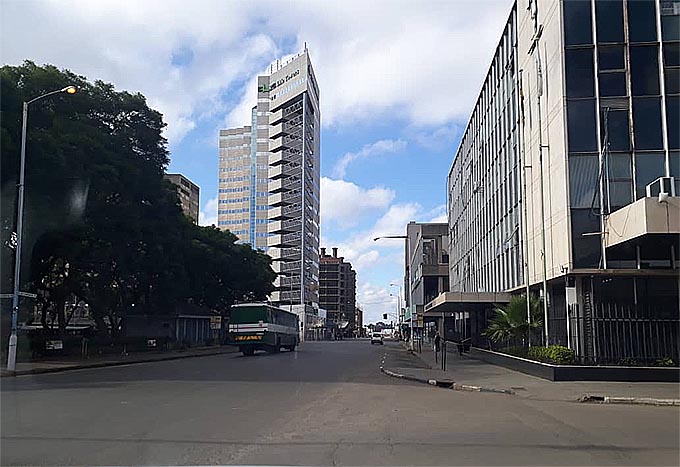 So serious is the security forces’ operation that for the first time since the lockdown started 12 days ago, there are officers at Cnr Herbert Chitepo/ Leopold Takawira Street.

The decision to man all routes into town follows reports that some citizens were using uncommon routes to sidestep security checkpoints.

A visit by The Herald news crew to the selling points revealed that the vendors were indeed not there.

However, other newspaper vendors were at their selling points.

Along Cameroon Street towards Mbare, a military vehicle is blocking two lanes, with vehicles and people being screened there.

Refreshingly, security officers manning the checkpoints have face masks and gloves after concerns they were exposed to the deadly virus by engaging people without protective clothing.

This reporter was stopped by friendly police in anti riot gear at NetOne Building and asked to demonstrate why he was driving into town.

The surge in numbers of security details come on the back of concerns by Government and experts yesterday that Zimbabwe risked reversing the gains recorded last week when many citizens largely heeded the lockdown directive.

Health experts fear there could be an explosion of fresh Covid-19 cases in the next few weeks if people continued to flood the streets.

As at yesterday, 3 251 people had been arrested for violating lockdown measures.

“It is disheartening to note that some citizens are willing to put themselves and those around them at risk by flouting the lockdown regulations,” said Minister Mutsvangwa.