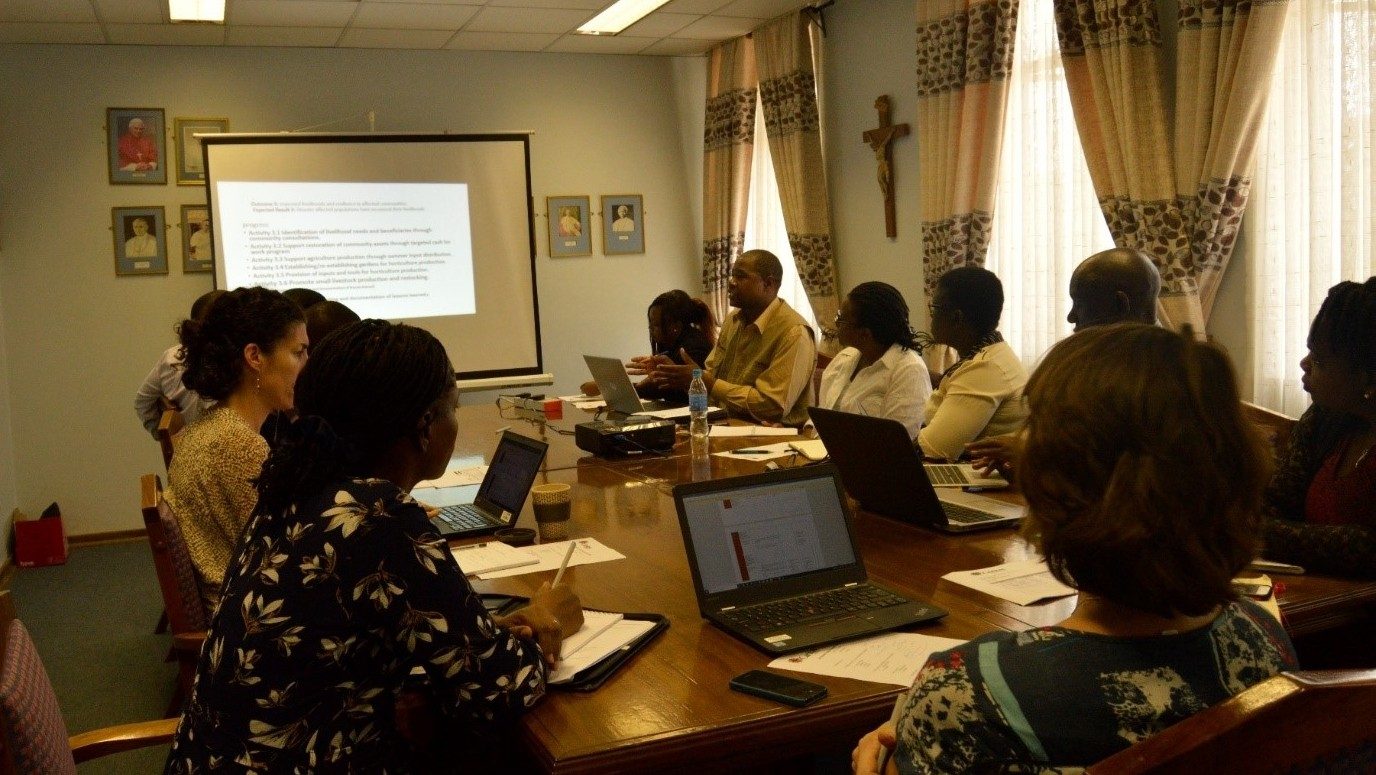 Caritas Zimbabwe working in collaboration with Caritas Internationalis and the World Food Programme (WFP) have distributed food to 300 000 drought-affected persons.

Caritas Zimbabwe has pledged to continue fulfilling its pastoral mandate of accompanying vulnerable communities in the country. This time around, this solidarity is being demonstrated through emergency food aid distribution.

The organisation’s projects are not only looking at short-term immediate food needs, but Caritas Zimbabwe is also providing seed and complementary agronomic training aimed at long-term agricultural recovery.

Zimbabwe has declared a State of National Disaster

The Zimbabwe Drought Response has come at a time when much of the country’s eastern provinces are recovering from the devastating effects of Cyclone Idai. As if Idai was not bad enough, the country is now facing a second complex food emergency: Last year’s poor harvest, adversely affected by Cyclone Idai, severe drought as well as economic challenges has led to a critical food crisis. The Government of Zimbabwe on, 6 August 2019, declared “a State of National Disaster” which opened doors for international assistance.

Caritas Zimbabwe Bishop-President, Archbishop Alex Thomas, of the Archdiocese of Bulawayo then contacted Caritas Internationalis to help orchestrate the appeal.

“It is regrettable that the Cyclone Idai emergency came at a time when the whole country had already been affected by drought resulting in a near-total maize crop failure in the 2018/19 season. At this time even for the few who had harvested something. also have their situation worsened because the little food from own production has already been depleted. At the local level, we have started to mobilise the faithful to support the survival of the vulnerable people; however, the magnitude of the problem has gone beyond our capacity to intervene. Unless external assistance is given, this may lead to starvation….Therefore on behalf of the people and Bishops of Zimbabwe, I highly recommend this application for your positive consideration,” the Bishop wrote.

Rural communities are most vulnerable

The appeal is feeding 17 000 vulnerable people in six most food insecure Dioceses of Hwange, Bulawayo, Gweru, Gokwe, Chinhoyi, and Masvingo. Harare and Mutare Dioceses have been spared from the appeal because other funding partners have opted to have bi-literal agreements to support them.

The drought response project will provide a blanket in-kind food distribution for eight months (until September 2020). The food basket contains grain, pulses (e.g. beans, lentils and peas) and oil at the following quantities standardised to align with WFP food expenditure basket composed of 7.5kg of grain per person per month; 0.5kg of pulses per person per month and 0.75kg of vegetable oil per person per month.

In similar food security projects, Caritas Zimbabwe is being supported by the World Food Programme to feed 261 699 individuals for four months ending April 2020 in the Districts of Gutu, Chivi, and Beitbridge in Masvingo diocese. In addition, Hwedza, Marondera, Chikomba, Murehwa in the Archdiocese of Harare then Umzingwane and Matobo in the Archdiocese of Bulawayo.