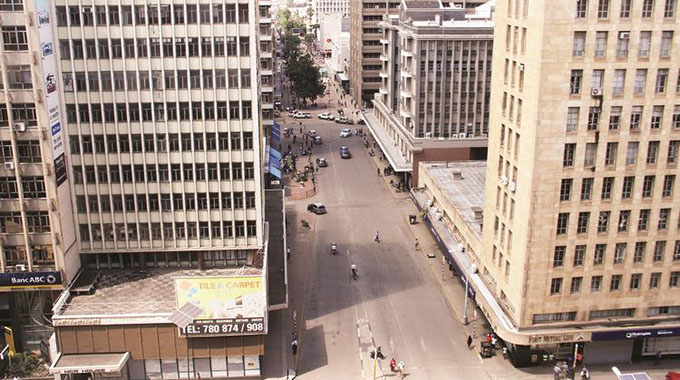 Many people yesterday heeded Government’s call to stay at home in the wake of the Covid-19 pandemic. Harare’s First Street, which is usually crowded, had fewer people. — Picture: Innocent Makawa.

Zimbabwe was in partial lockdown yesterday, with the formal sector mainly taking heed of President Mnangagwa’s call to stay at home, among other measures to prevent the spread of coronavirus.

Government called on companies to reduce their workforce and practise social distancing.

Harare City Centre was low on both human and vehicular traffic.

The morning rush hour was largely trafficable, an indication that some motorists had stayed home.

The city centre also had many empty parking bays.

Harare City Council said it had decongested its workstations with effect from yesterday.

Critical service delivery employees are the only ones reporting for duty.

“Some management staffers will work from home. Support staff on special leave. District offices remain open with minimum staff,” said the City of Harare in a statement.

To promote social distancing, Zupco was only carrying seated passengers.

Other buses were also not accepting standing passengers. Major supermarkets such as OK and TM had average human traffic and were sanitising shoppers at entry points.

However, banks were battling to contain long queues of clients wanting to withdraw money.

Siyaso and Mupedzanhamo in Mbare had fewer people than usual.

Mbare Musika was the most crowded in Harare.

It was a hive of activity at Makombe Building, the Passport Office, with many people queueing to top up for passports they applied late last year while others filed to collect passports.

The Zimbabwe Electoral Commission (ZEC) heeded the call by suspending all electoral activities.

In a statement, ZEC chairperson Justice Priscilla Chigumba yesterday said the suspension affects the conduct of a by-election that was due to be held in Ward 16 of Chiredzi Rural District Council on April 4.

New dates for the conduct of any by-election will be notified at the appropriate time.

In Masvingo most shops and businesses, including financial institutions and other big firms, heeded the call for a partial lockdown to combat the spread of coronavirus.

The fewer shops and restaurants that were open, sanitised customers.

In Bindura, supermarkets, banks and food outlets were open but sanitised people and allowed them entry in small numbers.

However, vendors and ordinary people were going about their businesses.

In Kariba, restaurants, shops and other public places took heed of the order to maintain social distance and restrict unnecessary movements. In Beitbridge people and businesses started complying with the precautionary measures announced by the Government.

Shops in the town have streamlined staff and operations.