From the outset, let me make it abundantly clear that I am neither a member of ZANU PF nor of any permutation of the MDC. If I say anything that you may not like, it is not because I belong to the other party. No! I belong to Zimbabwe. Lately and rather sadly, I […]

From the outset, let me make it abundantly clear that I am neither a member of ZANU PF nor of any permutation of the MDC. If I say anything that you may not like, it is not because I belong to the other party. No! I belong to Zimbabwe. Lately and rather sadly, I

Source: Constitutionalism not populism will take Zimbabwe forward – The Zimbabwean 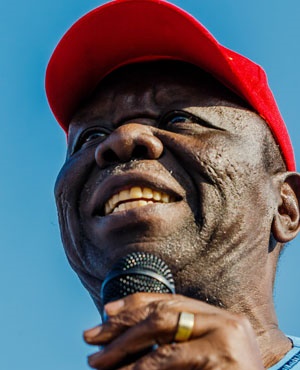 From the outset, let me make it abundantly clear that I am neither a member of ZANU PF nor of any permutation of the MDC. If I say anything that you may not like, it is not because I belong to the other party. No! I belong to Zimbabwe.

Lately and rather sadly, I have observed that the only difference between ZANU PF and MDC supporters is that they do not support the same party. They both are rigidly intolerant when it comes to diversity of opinion. If you are not in our party, then you are an enemy. That is their way of thinking—all of them. Such a mindset is not only retrogressive but unintelligent, uninformed and dangerous. Which political party has more than 13 million members in Zimbabwe or at least half of that? None!

Interestingly, even some in the diaspora who should be a bit wiser by now because of their experience of functional democracies around the world, also display the same mindset, thinking and behaving in the same way. We have a problem, a very serious problem!

After the departure of the late President Mugabe as well as that of long-time opposition leader Morgan Tsvangirai, a lot of people did some serious introspection and asked themselves if they should continue to be embroiled in the toxic politics of polarisation and mudslinging or choose the politics of constructive criticism and progressive engagement. Some chose the latter while still others simply chose to be objective onlookers, enjoying the action from the terraces. Those on the terraces have every right to criticise those on the field. That is exactly what I am doing here, and I have no regrets.

The ongoing debate about the Khupe case is one that has prompted me to scream from the terraces after months of silence. I have seen a lot of people being verbally abused on different forums and platforms for openly stating a known fact, which is that constitutional provisions were not followed when Tsvangirai appointed two additional deputies. The constitution was not followed again when Nelson Chamisa was elevated to lead the MDC-T when Tsvangirai died. Anyone who disagrees with that is seeking only to create mischief or, perhaps even worse, is displaying their gross ignorance. Some have attacked the courts for being biased. Granted, our courts of law have not always demonstrated consistency in some of their judgements, however that alone does not sanitise the illegal transgressions that happened within the MDC-T before and after Tsvangirai’s death.

Some have gone on to denigrate professor Lovemore Madhuku for representing Ms Khupe as if the other side did not have legal representation in that court case. I have seen some disgusting slurs thrown at Madhuku, denigrating everything from his wardrobe to his physical appearance. Surely, my fellow Zimbabweans, we cannot sink that low. And, if I may ask, what did Nelson Chamisa set out to achieve by launching an appeal in a case that clearly had so many holes in it?

Not long ago, Job Sikhala represented Walter Mzembi of G40 fame. Tendai Biti once represented Gideon Gono, Chamisa represented Zuva Petroleum in a controversial case that resulted in massive job losses as companies were allowed to terminate workers’ contracts upon giving three months’ notice—the list goes on. Nobody raised any objection. So, what is wrong with Madhuku representing his client and winning the case? That is his job. That is what he does for a living. What lawyer goes to court with the intention of losing?

I have also heard the pejorative term “ZANU PF project” being applied to Thokozani Khupe, Douglas Mwonzora and Morgen Komichi in their acceptance of the court judgement. This is reminiscent of 2005 when Professor Welshman Ncube split the MDC. The same people who praise Welshman Ncube today are the very same ones who labelled him a CIO operative and a “ZANU PF project” back then. Now Ncube is calling Khupe a “ZANU PF project” as well; is that not ironic? Did not Ncube and Khupe have the same grievances which pointed at constitutional violation by their boss, Morgan Tsvangirai (plus Nelson Chamisa in Khupe’s case)?

In 2013, the year of “Renewal Revolution”, we heard the same mantra only that time it was Tendai Biti on the receiving end. Paradoxically, he is now one of the two Vice Presidents together with Welshman Ncube.  Remember the Mandel Centre Declaration? Fast-forward a few years, Biti and Ncube are back in the fold. Those who were religiously babysitting the party all these years notably Komichi and Mwonzora are now a “ZANU PF project”. I wonder how many “ZANU PF projects” are on the MDC master plan and which one is next! How long will it be before we hear that Chamisa is an intelligence operative and another “ZANU PF project” who was entrusted with the transportation of dairy products from Gushungo Dairy by Zimbabwe’s disgraced former president? What did Chamisa say to Mugabe to be trusted to that extent given the polarisation that existed between the ruling party and the opposition then? Are you biting your nails? Same here!

This circus is no longer exciting, even kids are sleeping! Can somebody please tell us how Professor Jonathan Moyo suddenly became a factor in the MDC-A? Is Nelson Chamisa now a client president of the G40 as well as the two seasoned “CIO operatives” that are now his deputies? What exactly is going on? When is the next split?

Zimbabwe is not private property. I will keep on asking probing questions including those considered to be sensitive because, whoever dreams of being the next president of our country, cannot dodge public scrutiny. If you violate the constitution of your own party and still insist that you did not do anything wrong, despite the glaring evidence to the contrary, why should anyone trust you with the business of running the country? An apology would have been appropriate. Mwana anotanga afudza mbudzi ozofudza n’ombe! (A child shepherds goats first before herding cattle).

The democratic agenda and discourse does not seek to replace ZANU PF with the MDC or a lesser devil. Rather it seeks to transform our politics once and for all. It seeks to establish the politics of values (Ubuntu), not that of personalities. It seeks to establish a peaceful, free, democratic, and prosperous nation based on good governance, equality of citizens and the rule of law. How do you become an advocate for good governance when you do not respect the law?

Turning to the government, my take is they really need to pull up their socks and move swiftly to complete the alignment of all remaining laws to the Constitution. Surely, seven years is more than enough time to bring this exercise to finality. The passion that they exert when they intend to amend the Constitution must double when it is time to implement what has already been agreed to by the people. As an example, a lot of Zimbabweans returning home still encounter unnecessary inconveniences at ports of entry as if immigration officers do not know that dual citizenship is now enshrined in the national Constitution. Provincial Councils should have been established by now in the spirit of devolution as required by the Constitution. The inordinate delay in implementing the Constitution adopted in 2013 is now becoming both inexcusable and disingenuous. It is simply unacceptable!

It is constitutionalism not populism that will take Zimbabwe forward.

Moses Chamboko is a pro-democracy activist, he writes from Sydney, Australia