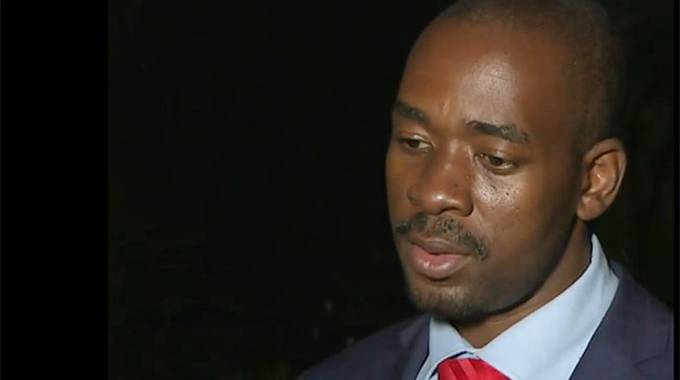 Fidelis Munyoro, Chief Court Reporter
The Supreme Court has confirmed the High Court’s decision that declared MDC-Alliance’s Nelson Chamisa an illegitimate leader of the opposition party after he wrestled power a few hours after the death of founding leader, Mr Morgan Tsvangirai.

The ruling comes after Chamisa had appealed against the ruling by High Court judge, Justice Mushore which nullified his presidency, in 2018.

The judgment nullified Chamisa’s appointment as the leader of the opposition MDC party and also nullified the appointment of both Nelson Chamisa and Elias Mudzuri as vice presidents of the party. The appointments were made by the late founding leader Mr Tsvangirai in 2014.

In a judgment that has potential of bringing commotion in the party now riddled with disharmony, Justice Bharat Patel yesterday ruled that Chamisa was unlawfully appointed as the acting president of the opposition party.

He upheld the lower court’s position saying it was unimpeachable.

The court observed that Dr Thokozani Khupe was the genuine acting president of the party at the time of Tsvangirai’s death, and restored the status quo.

The judge directed Dr Khupe , who was being represented by Professor Lovemore Madhuku, to convene an extra ordinary congress within three months to elect the party’s new president.

“It is accordingly ordered that the appeal be and is hereby dismissed with no order as to costs,” said Justice Patel.

“The third respondent, (Dr Khupe) in her capacity as the Acting President of the first appellant (MDC), be and is hereby ordered to convene an extra-ordinary congress, within a period of three months from the date of this order, in order to elect a new President.

“In the event that the third respondent fails or is unable to comply with . . . the above, the third appellant (Morgan Komichi), in his capacity as the national chairperson of the first appellant (MDC), be and is hereby ordered to convene the aforesaid extra-ordinary congress, within a period of four months from the date of this order.”

In his ruling, Justice Patel held the view that the corrective intervention of the superior court in the affairs of the party was a matter of significant public importance, not only in relation to the party and its members but also as regards the governance of political parties generally. It was also the court’s view that it was necessary to deliver its definitive pronouncement on the legitimacy of Chamisa’s rise to the presidency of the party.

The ruling was also meant to ensure that the leadership of the party is constitutionally and lawfully ensconced.

The judge, however, noted the imbroglio that the party’s leadership had become entangled in could well be water under the bridge, which for the sake of the party’s stature and credibility, needed to be correctly and systematically constructed.

Notwithstanding the political mootness of the matter, the matter is imperative that there should be an authoritative determination of this appeal in the interests of justice, said Justice Patel.

“The essence and objective of the corrective measures to be implemented by the party is to restore the status quo ante (former position before the death of Tsvangirai) that prevailed before the irregular and unlawful appointments to the party presidency took place,” he said.

“This would necessitate having to extend the time limit prescribed in the party constitution apropos (concerning) the convening of an extra-ordinary congress to elect a new president following the demise of Dr Tsvangirai.”

In terms of Article 9.21.1 of the party constitution, the deputy president assumes the role of acting president upon the death of the president, pending the holding of an extra-ordinary congress to elect a new president.

Such congress must be held no later than one year from the death of the former president. In this case, Justice Patel said the power to convene an extra-ordinary congress is ordinarily vested in the president by dint of Article 9.1.2.1.

It follows that, said the judge, by assuming the role of acting president, the deputy president is ipso jure (by the law itself) equally empowered to convene any such congress.

In her judgment, Justice Mushore ordered the MDC to hold an extraordinary congress within a month using 2014 structures in which Dr Khupe was the only vice president of the party.

However, the ruling was suspended after Chamisa appealed and the opposition MDC went on to hold a congress last year.

Meanwhile, Mr Komichi who assumes the position of MDC-T national chairman following the ruling, said he was reversing all suspensions and sackings of party members by Mr Chamisa.

“The suspensions, dismissals, and recalls of the Mayors of Chegutu, Masvingo and Victoria Falls are hereby set aside and their Worships are reinstated thus giving effect to the true wishes of the electorate,” he said. “All members of staff whose contracts of employment were unlawfully terminated last year are hereby reinstated and must report for duty as soon as practicably possible given the circumstances.”

Mr Komichi advised all party deployees to council and Parliament that there will be no reprisals from the leadership.

Mr Douglas Mwonzora, who was secretary general during the period, said whoever was leader of MDC-T “automatically is the leader of MDC-Alliance”.

“So, there is no need to denigrate the courts anymore as the courts have ruled as a result of an appeal filed by Advocate Chamisa himself. So, you do not say when the courts ruled against you it is null and void every time,” said Mr Mwonzora

But Mr Biti said: “My position is that we as MDC-Alliance held our congress in May 2019. Chamisa is our president and our next congress is in 2023.”