Source: ED, Ncube lost opportunity at CEO’s meeting | Daily News HARARE – The  reported anger by captains of industry when President Emmerson Mnangagwa and finance minister Mthuli Ncube snubbed the recent CEO Africa Roundtable meeting in Victoria Falls is understandable as this was their only opportunity to showcase the vital role played by the private […] 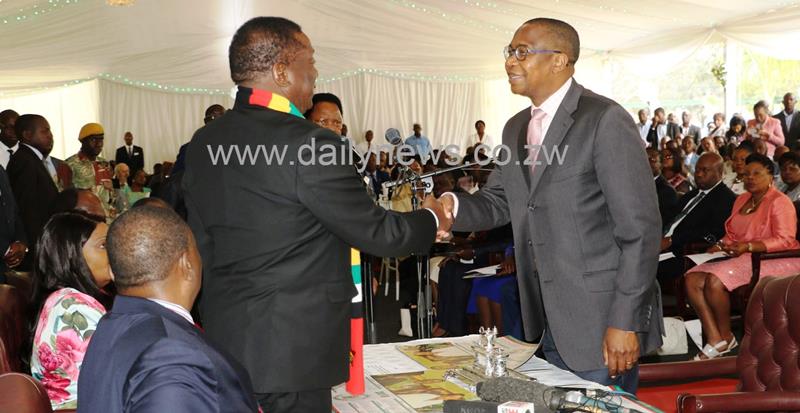 HARARE – The  reported anger by captains of industry when President Emmerson Mnangagwa and finance minister Mthuli Ncube snubbed the recent CEO Africa Roundtable meeting in Victoria Falls is understandable as this was their only opportunity to showcase the vital role played by the private sector in fostering growth across the continent.

Mnangagwa and more than 500 participants, including some 400 CEOs from across the African continent, were expected to attend the convention at which the President was the guest of honour.

He and Mtuli however failed to attend the 6th edition of the CEO Africa Roundtable which has according to organisers become one of the most important events in the African business calendar, enabling participants to exchange their views and opinions on the issues affecting the economic development of the continent’s companies, in a high-quality international setting that is ideal for conducting business meetings.

Politician and lawyer Obert Gutu said it is very unfortunate that the President and other high ranking government officials failed to address the CEO Africa round table.

“This would have afforded senior government officials to mix and mingle with captains of industry and business and also get to know what they have got to say regarding the socio-economic trajectory that government has to take as it seeks to reboot Zimbabwe’s comatose economy.

“May be they have got their own reasons for missing such an important interface with business leaders,” said Gutu.

Analyst Vivid Gwede said it doesn’t make sense that we are eager to address business people as far as Davos in Switzerland and fail to turn up at business forums in our own country.

“One wonders whether what motivate us are the travels rather than the opportunities. What is more important in the so-called ‘Thank you rallies’ or working on what people promised in the manifestoes?

“I wouldn’t know why the key government officials were not there, they may answer Zimbabweans for themselves. But the picture we portray is not good,” said Gwede.

Social analyst Rashweat Mukundu believes the snub is a crisis of leadership and failure to prioritise key national dialogues.

“The snubbing is yet another indication that the leadership values events and platforms they have control over and these tend to be political while snubbing critical events that assist in national development.

“Another reason is that the organisers were broad in their invitations including opposition figures and the snubbing may as well show an aversion towards dialogue and engagement with the opposition,” said Mukundu

Political analyst Piers Pigou said their failure to participate certainly sends the wrong signal and feeds into a growing uncertainty about the reform trajectory.

“This comes on top of reported differences between (finance minister Mthuli) Ncube and RBZ governor (Reserve Bank of Zimbabwe governor John) Mangudya over the direction, timing and sequencing of monetary policy, resulting in the delay releasing the MPS.

“It is critical for the government of Zimbabwe to send a clear message on these issues,” said Pigou.

Social analyst Lenox Mhlanga said while he will not speculate as to why they subbed the event, be believes it was a lost opportunity to engage CEOs on neutral territory, given the issues that business have to grapple with in a challenged economy like ours.

“There is little point in looking for investment outside the country when the conditions for local business remain depressed. My suggestion is that of fixing things at home, by giving local business leaders the confidence that the President is fighting in their corner first,” said Mhlanga.

Harare Resident Trust director Precious Shumba said Mnangagwa is uncomfortable participating in events organised by other stakeholders as he is afraid to answer questions directly put to him by citizens and their representative bodies.

“When he assumed the Presidency following the ouster of former President Robert Gabriel Mugabe, the world and Zimbabweans largely celebrated the smooth transition which came with the help of the military. There was unprecedented goodwill towards Mnangagwa and his government.

“However, over time, the President has been confirming widely held views of him as a hardliner and not sophisticated as a President. The goodwill of different interested stakeholders is quickly disappearing, and one day too soon he will be left on his own without too many friends to back him in his economic initiatives.

“The snubbing of the conference by the captains of industry is testimony that the President wants total control, but he cannot get it as long as he believes that all stakeholders in Zimbabwe must dance to his tune because he is the President.”

Shumba said Mnangagwa needs to humble himself and evaluate where the county stands in relation to other nations, and where he stands in terms of security of his own tenure as both the head of State and Government and the leader of Zanu PF.

“The Finance and Economic Development and the Commerce and Industry Ministers are critical stakeholders who should have joined the chief executive officers at this conference so that there is enhancement of interaction and exchange of ideas on how to achieve the President’s 2030 Vision of a middle-income country.

“If they are dreaming of industrialising and modernising Zimbabwe, they have to put their shoulders to the wheel and complement the efforts of all stakeholders so that there is harmony in the implementation of Government programming,” said Shumba.