Source: Editorial Comment: Amnesty spells need for sentence reforms | Herald (Top Stories) Beneficiaries of the Presidential Amnesty express their joy on being released from Harare Central Prison recently. — Picture: Believe Nyakudjara Amnesty can be difficult to calculate as the several pardons Zimbabwean Presidents have proclaimed since independence have shown. Such practices, including the […] 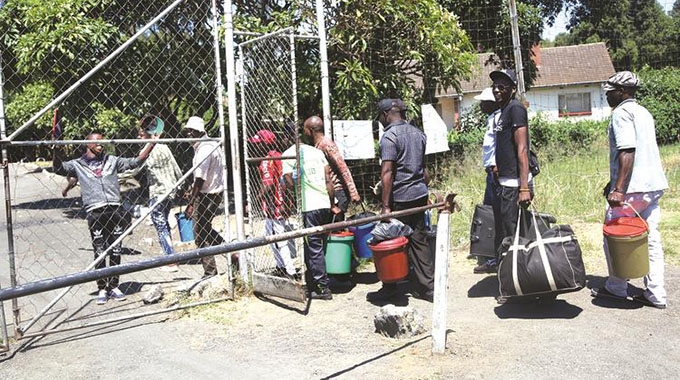 Beneficiaries of the Presidential Amnesty express their joy on being released from Harare Central Prison recently. — Picture: Believe Nyakudjara

Amnesty can be difficult to calculate as the several pardons Zimbabwean Presidents have proclaimed since independence have shown.

Such practices, including the latest one which allowed 1 680 prisoners to be released on Wednesday after reduced sentences, sought to control overcrowding in prisons.

Although only 1 680 could go home this week, there will be more going home early in time because a fair number of other non-violent criminals have had their sentences reduced, although not enough for immediate release.

But when President Mnangagwa exercised his constitutional powers of mercy, after consulting his Government, he obviously had to keep a number of factors in mind.

And these factors suggest the time may have come for serious debate on our whole prison policy.

There are three main reasons for committing a person convicted of criminal offences to prison.

First is the punishment, to teach them a lesson, although far more emphasis than before is also placed on trying to get them to change their ways and to equip them with skills that can help them stay straight when they go home.

But prison is still punishment for an offence sufficiently serious that the options of a fine or of community service are not appropriate.

Secondly, prison sentences are designed to deter other would-be offenders.

Would-be criminals have to take into account that if they are arrested for committing certain offences, they are highly likely to go to jail for the same sort of duration as others recently convicted.

Admittedly, this has to be backed by high arrest and conviction rates.

Thirdly, society needs to be protected from some criminals.

This is sometimes stated explicitly by judges imposing the extended term of imprisonment on a multiple repeat offender, someone who appears little interested in reforming.

But it is also an implicit factor when violent criminals are jailed and in some other cases where a criminal preys on the weak and vulnerable.

The latest amnesty was carefully tuned to keep the violent group in prison, except for lifers being allowed out after a minimum of 25 years, and to release early those in for punishment and reform, who had not abused previous chances.

The deterrent effect was probably not weakened, as a professional criminal cannot bank on an amnesty when looking at the gains and risks.

Since independence, there has been a great deal of rethinking of sentencing policies.

One of the earliest saw the whole attitude to rape change, with strong leadership from then Chief Justice Telford Georges, the media and civil rights organisations.

Colonial judges had, except when race issues intervened, treated it as a relatively minor crime by an over-excited man and in any case with the woman partly to blame.

The 1980s recognised it as it was, a very serious crime of violent assault, and sentences rocketed to the same levels as other crimes of extreme violence.

A second change saw a High Court judge, with delighted approval from the Supreme Court on the automatic appeal, applying mitigation in advance, offering to suspend part of a thief’s sentence if they paid back what they stole.

This is now standard; thieves go to prison, but get out earlier if their victims have their property restored or are paid adequate compensation.

The advent of an option of community service for a group of non-violent first offenders whose offences were too severe for just a fine, but whose jail sentences were relatively short, was another welcome reform and experience has shown did not lead to any rise in crime for those sort of offences.

But now we need to look at a long-term policy of how selected groups of prisoners can go home early and under what sort of conditions. Relying on ad hoc amnesties is not ideal.

We inherited, and still follow, the British policy of letting jailed prisoners who cooperate and behave in prison out automatically once they have completed two thirds of their sentence.

But we do not have formal parole, where a reformed prisoner can get supervised early release. And there are other possibilities.

A good start might be to start thinking more of suspension, rather than remissions under automatic rules and amnesties. That is the prisoners released early have the remaining sentence suspended, and they serve it, along with the new sentence, if they re-offend.

This could then be advanced so that prisoners, at least those who were non-violent, who have served perhaps half their term, could be assessed for a suspension and for parole, that is they have to keep the authorities informed of where they are, are not allowed to travel much, and have to check in regularly.

We could even have an intermediate stage where certain prisoners can have part of their sentence commuted to community service, so they serve part in jail and then serve the rest at home, but having to perform community service.

Between them they should be able to figure out a range of options and recommendations that would fulfil the requirements of punishment, reform, deterrence and protection of society better than our present systems adapted from those left by a colonial power.