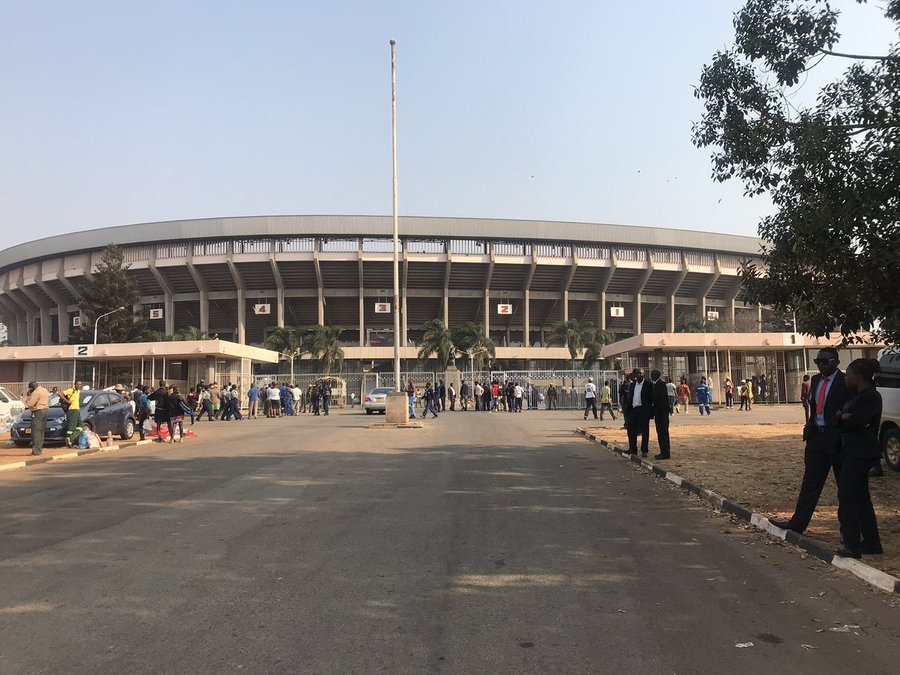 While Zimbabweans failed to fill the 60 000-capacity national sports stadium at the funeral of their long-time former president Robert Mugabe, African leaders made their presence felt.

Mugabe died at the age of 95 in a Singaporean hospital last week. His remains are set to be buried at Heroes Acre in 29 days. The Zimbabwean government is still preparing a monument for the man many describe as the founding father of Zimbabwe.

“We salute his memory as his soul marches on to join the great patrons of our continent,” said former Ghanaian president Jerry Rawlings.

SA President Cyril Ramaphosa was booed by Zimbabweans as he took to the podium at former president Robert Mugabe’s memorial. Ramaphosa went on to apologise for the xenophobic violence in South Africa.

He went on to praise Mugabe, who once lived in Ghana, referring to him as “great one”, a pioneer of “black assertiveness” and someone who showed “outstanding leadership”.

Rawlings was one of many former heads of state who joined the Mugabe family and the Zimbabwean government in bidding farewell to the former leader, who was at the helm of government form 1980 until he was ousted in a coup in 2017.

Other heads of state included Kenyan President Uhuru Kenyatta who, when delivering messages of condolences to the Mugabes and celebrating the controversial leader, said Mugabe was a visionary leader and a relentless champion of African dignity.

“He has left an indelible mark in the history of Zimbabwe and Africa at large through his political astuteness and zeal,” said Kenyatta.

‘I apologise for what has happened in our country’

Kenyatta said the onus was on the current crop of leaders to keep hope alive and make sure the dream of a free and prosperous Africa became a reality.

The day’s pomp and ceremony was disrupted as President Cyril Ramaphosa, who is also the African Union’s current chair, was called to the podium. Zimbabweans in the crowd jeered and booed, in response to some of the violence that has been meted out against African foreign nationals in South Africa.

“I can hear you are responding,” was how Ramaphosa took on the criticism during his address. He addressed the violence across parts of his country aimed at other Africans.

“I stand before you as a fellow African, to express my regret and to apologise for what has happened in our country.”

None of those who spoke mentioned the state of Zimbabwe, nor Mugabe’s role in the deterioration of its economy, however Zimbabwean President Emmerson Mnangagwa used the opportunity to try sell Zimbabawe and reminded investors that the country was “open for business”.

“May the world honour the great Mugabe by removing sanctions. Remove sanctions from Zimbabwe. We do not deserve them,” said Mnangagwa.

Mnangagwa, a Mugabe long-time ally turned foe, told Mugabe’s widow Grace Mugabe that she would always have his and the government’s support.

“We who remain shall continue to hear his rich, brave, defiant and inspiring voice which we have grown accustomed to,” he said of his predecessor.

Earlier, Mugabe family representative Walter Chidhakwa spoke of the Mugabe he had known, saying the former leader believed in unity and hated tribalism.

Chidhakwa, who became emotional as he spoke of Mugabe, said the former leader was a sad man towards the end of his life.

“He recalled quietly the journey he had walked, a profound journey, a hard and excruciating journey, and thus must he leave,” Mugabe’s nephew said through tears.

There was also a 21-gun salute and 95 doves, marking each year of Mugabe’s life, were released.

The dignitaries were also given a chance to view the body and pay their final respects.

Mugabe’s remains will be taken to his home village of Zvimba on Sunday to give people a chance to view the body and pay their respects, before he is finally buried at Heroes Acre in a month’s time.