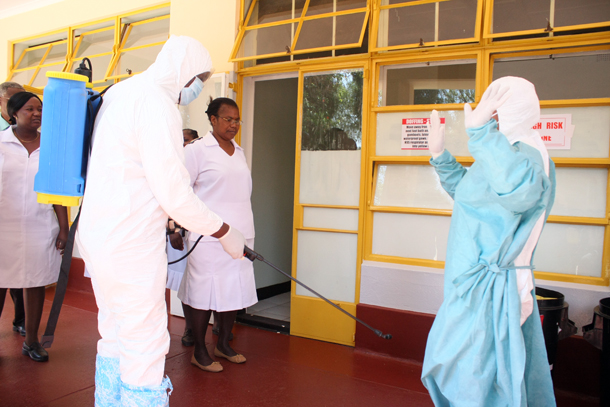 Zimbabwe has so far recorded 11 confirmed positive cases of the deadly COVID-19 and three deaths, but there is suspicion government could be understating the figures because of its inability to conduct massive testing, with only 438 tests conducted as of Thursday.

Matara said Solanki was reportedly involved in the setting up of a COVID-19 designated facility at the Rock Foundation Medical Centre in Mt Pleasant, Harare.

“In that regard, we kindly request your office to conduct an investigation into the operations of Dr Vivek Solanki with regards to the treatment of COVID-19 patients,” Matara said.

The letter stated that on April 8, Solanki, through his Twitter account @doksolanki, at 1357 hours, “insinuated that he is actively involved in the treatment of COVID-19 patients and reported that they were experiencing gastroenteritis”.

Matara said after being quizzed about his role by his followers, Solanki deleted the tweet, raising suspicions of all well-meaning Zimbabweans.

“To the best of our knowledge, currently, COVID-19 patients are being managed in State and local authority-run facilities in Zimbabwe,” Matara said.

The human rights doctors said there was a possibility of “masking the true extent of COVID-19 cases” in Zimbabwe, “with some cases not being reported through the official statistics” and called for an investigation to bring clarity on whether the country’s reported 11 cases include statistics from Solanki.

Matara further claimed that Solanki claimed he was treating such mentioned patients outside Zimbabwe, “of which we are aware that there are travel restrictions in place” and “we are also unaware of countries that have been utilising telemedicine to respond to COVID-19 patients”.

Telemedicine refers to the practice of caring for patients remotely when the provider and patient are not physically present in the same place.

“In any case, if he was doing the right thing, why did he rush to delete the tweet? We, therefore, urge your office to investigate this claim and reassure the nation of the true extent of COVID-19 in Zimbabwe,” Matara said.
Mahomva said she was yet to receive the letter.

“I am actually in my office, if I come across it, I will come back to you,” she said.

Rock Foundation Medical Centre, which has been taken over by fuel mogul, Sakunda Holdings owner Kudakwashe Tagwirei, was expected to open its doors to the public on April 5 after receiving equipment from China and South Africa.

In a related development, the Media Institute of Southern Africa (Misa) Zimbabwe has also filed an application at the High Court seeking an interdict compelling government to avail information and resource materials on COVID-19 to the public.

Misa Zimbabwe submitted that there was no information regarding the money received from the Global Fund after President Emmerson Mnangagwa declared the pandemic a state of national disaster and what is in the State coffers for the fight against COVID-19.

Due to lack of that information, Misa said, the public will be left to guess on the gap between resources available and required.

The media lobby group also demanded government releases information on the number of doctors available at national, provincial and district levels after months of labour unrest by the medical practitioners.
“The information given in the updates on tests carried out is cumulative and it makes it difficult for the public to identify hot zones of the pandemic, which is critical in enforcing the lockdown and to assist people to avoid such hot zones,” the lobby group said.

Misa said on April 7, Moyo and Mutsvangwa published an update relating to one resident of Bulawayo who was infected with the virus and succumbed to the infection, but did not give details about the name of the hospital.
“There is also no information on how health services will be delivered to those in rural areas,” Misa said.

The media lobby group also submitted that the content of information available to the public regarding State measures and state of preparedness was scant and was in violation of the right to access to information.

It also raised concern that government updates were exclusively in the English language.

It said the communication was marginalising rural people as most of them were not active on social media due to unavailability of data bundles or wifi as well as limited access to mass media forms of communication.
Moyo and Mutsvangwa are yet to respond.