For the first time since independence, Zimbabwe’s ruling party is losing support in its rural strongholds. Source: In post-Mugabe Zimbabwe, young people are driving political change – CSMonitor.com By Jeffrey Moyo Contributor GOTORA, ZIMBABWE For years, Gift Ngwarati has led a double life. To his neighbors here in Gotora, a village in Zimbabwe’s eastern Uzumba district, the […]

For the first time since independence, Zimbabwe’s ruling party is losing support in its rural strongholds. 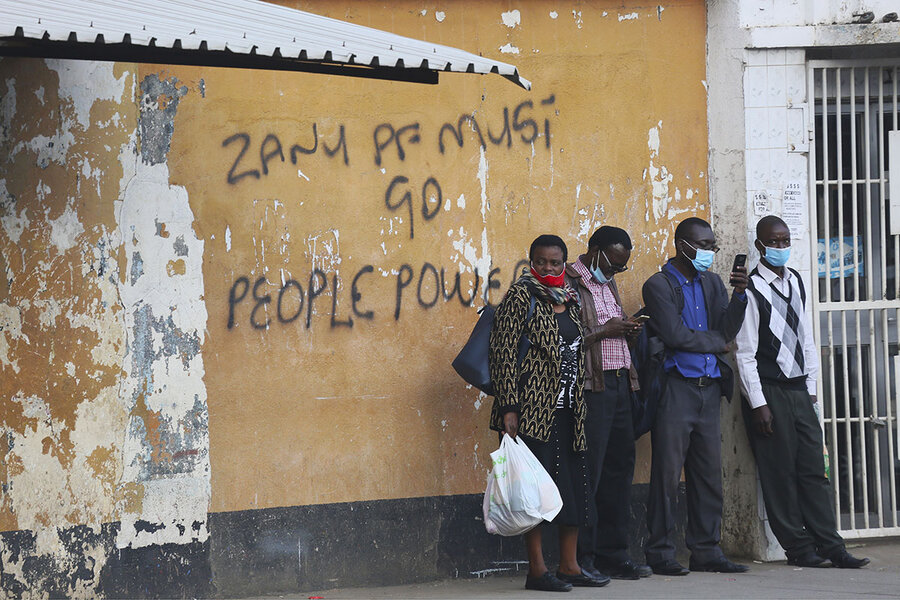 For years, Gift Ngwarati has led a double life. To his neighbors here in Gotora, a village in Zimbabwe’s eastern Uzumba district, the 40-something is an avid supporter of the ruling Zanu-PF party, so devoted that he is even a local committee member.

But Mr. Ngwarati’s secret is this: He supports the opposition party. And here in the rural stronghold of the party that has ruled since independence, often through violence, it’s an allegiance he fears could cost him his life.

“Deep in my heart,” says Mr. Ngwarati, “I support the opposition. I want change.”

WHY WE WROTE THIS

Driven by a young generation that wants change, waning support for Zimbabwe’s Zanu-PF party could be a bellwether for the first democratic transition since independence in 1980.

The Zimbabwe African National Union – Patriotic Front, or Zanu-PF – has long held sway in districts like Uzumba, rural areas where much of a brutal seven-year bush war was waged against British colonial rule.

Like many people in Uzumba, Zanu-PF’s founding father, the late President Robert Mugabe, was from the Zezuru clan, which played a key role in freeing Zimbabwe from white minority rule in 1980. Thereafter he rose to power, and during the early years of his tenure, Zimbabwe flourished to become one of the most prosperous and educated countries in Africa.

Mr. Mugabe, who died in 2019, still casts a long shadow over the country, and the party he helmed for 37 years is still in power. But as decades of economic mismanagement have caused growing hardship for ordinary Zimbabweans, officials have increasingly turned to violence and intimidation to maintain their grip.

When Mr. Mugabe was ousted by the military in 2017, many hoped for an end to the repression and mismanagement of his authoritarian rule. Instead, his party has further cracked down on civil activists, particularly young people protesting as the coronavirus pandemic has exposed rampant graft.

As Zimbabwe moves toward elections next year, the battle to bring about the first democratic transition since independence is coming to a boil. For the first time in a decade, Zanu-PF faces a serious opposition challenger. Led by the charismatic Nelson Chamisa, who is in his mid-40s, the Citizens Coalition for Change (CCC) is seizing on the rumblings of discontent that are growing louder by the day.

Jeffrey Moyo
An opposition “Citizens Coalition for Change” rally takes place in an informal settlement just outside Harare, the Zimbabwean capital, in March 2022. In next year’s elections, the CCC is hoping to capitalize on widespread disenchantment with the ruling Zanu-PF party’s poor economic record.

Mr. Ngwarati was just 2 years old when Zimbabwe gained independence from Britain. The same party has been in power his whole life. When he was 19, Mr. Ngwarati became a card-carrying member of Zanu-PF, which was then presiding over a booming economy and expanding schooling for black Zimbabweans as part of a wholesale dismantling of white minority rule.

But the glory days soon passed.

In 1997, the government printed and handed out so much money to some 60,000 liberation war veterans that the local currency plummeted. Three years later, in 2000, those same veterans led a violent and chaotic seizure of white-owned farms.

The takeover of these commercial farms, many of which ended up in the hands of Mr. Mugabe’s cronies, spurred hyperinflation, joblessness, and a political crisis from which, some experts say, the country has never truly recovered.

In theory, Mr. Ngwarati’s position as a well-known foot soldier of the ruling party should have granted him some measure of status and perks.

Instead, he has never had a formal job, putting him among the 90% of working-age citizens who are unemployed, according to the Zimbabwe Congress of Trade Unions. Nor has he benefited from handouts periodically given to war veterans, considered a key demographic by the government.

With annual inflation climbing to 96% last month, the economic devastation is visible in other ways. Two of Gotora village’s three shops have been shuttered and have fallen into disrepair. One recent afternoon, Mr. Ngwarati drove past the sole functioning shop, watching villagers counting out change to buy their goods. A few sat on the storefront veranda, taking turns sipping beer from a single shared jar.

With each passing year bringing more economic hardship, Mr. Ngwarati says, he slowly became increasingly disillusioned. Two years ago, as the COVID-19 pandemic whipped through the country, he was horrified by news reports that the health minister had illegally skimmed millions of dollars during a deal intended to buy medical equipment to fight the virus. That year, he threw away most of his Zanu-PF regalia.

Last year, when the government began cracking down on street protests, arresting key activists and shutting down the internet, he began secretly attending opposition rallies, hoping no one would spot him in the crowds. Recently, he began going door to door in villages in Uzumba on foot to canvass neighbors he knows are equally disgruntled.

“This year, I have made up my mind to support CCC, like many others here who are doing so secretly,” Mr. Ngwarati says. “[I] will express myself when I vote, come elections next year.”

Still, when he saw a fellow villager approaching on the road, he covered his face with his cap. “He must not see me here,” Mr. Ngwarati says, fearfully.

Jeffrey Moyo
(Left to right) Lynnette Karenyi, co-vice president for Citizens Coalition for Change; party President Nelson Chamisa; and Job Sikhala, deputy national chairperson, attend an opposition CCC rally outside Harare, the Zimbabwean capital, in March 2022. In rural areas of Zimbabwe, many opposition supporters are afraid to identify themselves in public for fear of violent retribution by the ruling Zanu-PF party.

Zanu-PF officials appear sanguine even as the rumbles of discontent continue to grow. “People will naturally get discouraged; it’s the new generation,” says Christopher Mutsvangwa, the Zanu-PF national spokesperson. “People are allowed to leave Zanu-PF as much as they are allowed to join it; this country is a democracy.”

But leaving the party has come at the highest cost for many.

In Mukonzi, a village near Gotora, Rangarirai Kaseke, a lifelong Zanu-PF supporter, returned home after losing his job in the capital, Harare. He said he was severely beaten by Zanu-PF thugs, who were allowed to roam with few consequences.

“I lost loved ones that were killed by Zanu-PF supporters; I was almost killed. I will not go back to Zanu-PF,” says Mr. Kaseke

“Nothing has come out of my support for Zanu-PF over the years,” adds Mary Mtegude, Mr. Kaseke’s wife. “I only work as a housemaid from one household to the other to try and raise some money for us to survive.”

“We have developed a strategy to penetrate rural areas,” says Fadzayi Mahere, the CCC national spokesperson.

In strongholds like Uzumba, she adds, “Zanu-PF weaponizes food aid, unleashes intimidation and violence, and captures traditional leaders to rig elections in its favor.”

But Ms. Mahere was reluctant to share the CCC’s rural strategy, saying to do so might give away its tactics to “the enemy.”

Some analysts say the opposition will need all the help it can get to unseat the government, which still has ardent followers.

Taurai Kandishaya, a 30-year-old from Nhakiwa, another village in Uzumba, says he could not imagine supporting any other party. “There is no way a sane Zimbabwean can leave Zanu-PF,” he says.

Mr. Kandishaya and his family members acquired land during the farm seizures in 2000, he explains.

“I will support Zanu-PF to the grave. I benefited from it,” he explains. “I can’t afford leaving.”

But the government no longer counts on voters such as Mr. Kandishaya, says Farai Gwenhure, an independent analyst based in Harare.