As this could signal end of her political career Source: Khupe has more to worry over Supreme Court MDC leadership verdict than Chamisa – The Zimbabwean Thokozani Khupe The 31 March 2020 verdict by Zimbabwe’s Supreme Court, over the opposition Movement for Democratic Change (MDC) leadership wrangle, between Thokozani Khupe and Nelson Chamisa, came a […]

The post Khupe has more to worry over Supreme Court MDC leadership verdict than Chamisa appeared first on Zimbabwe Situation.

As this could signal end of her political career

Source: Khupe has more to worry over Supreme Court MDC leadership verdict than Chamisa – The Zimbabwean 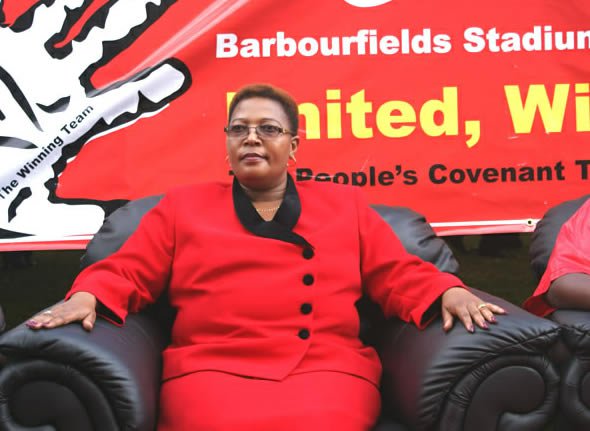 The 31 March 2020 verdict by Zimbabwe’s Supreme Court, over the opposition Movement for Democratic Change (MDC) leadership wrangle, between Thokozani Khupe and Nelson Chamisa, came a day too early – since, as far as I am concerned, it would have been a most befitting hilarious April Fool’s jest – considering that it was nothing more than a damp squib, without any significant impact on the ground.

The two protagonists, who had been deputies to the late founding president Morgan Richard Tsvangirai, had sought to take over the MDC- T – which had been so-named to distinguish it from other similarly named MDC breakaway factions – after his passing away on 14 February 2018, after a long battle with colon cancer.

Soon after the founding president’s death, the standing committee of the party had appointed Chamisa the interim leader, pending an elective congress later on – however, this did not go down well with Khupe, who successfully challenged this decision in the High Court, thereby effectively rendering her the new interim president.

Needless to say, Chamisa appealed this verdict in the Supreme Court, whose judgement was issued on 31 March 2020 – in which the High Court ruling was upheld, confirming Khupe as the interim president of the MDC-T, concluding that Chamisa’s appointment was not done procedurally.

Normally, this should have been a day of unlimited jubilation for Khupe – as it would have marked the relieving end to a two year long bruising battle – but, alas, since this verdict could potentially signal the start of the end of her long political career.

Why would I say so, considering that the country’s highest court of appeal effectively declared her the leader – for the interim, at least – of the largest opposition political party in the turbulent southern African country?

Well, for starters events on the ground, during this long court tag-of-war, have substantially evolved – with Chamisa moving on to lead his own political party, the MDC Alliance, which successfully registered for the 2018 harmonized elections, whereby it performed outstandingly, with Chamisa officially receiving nearly half of the popular votes against the country’s president and ruling ZANU PF party candidate Emmerson Dambudzo Mnangagwa – a result, most in the MDC Alliance still dispute, as they believe he actually obtained far much more than 50 percent, and won the presidency – in spite of a Constitutional Court ruling declaring Mnangagwa the winner.

On the other hand, Khupe proceeded to be elected the substantive MDC-T president at a party congress in the country’s second largest city Bulawayo in April 2018, after which she similarly contested in the harmonized elections – but, only managing to garner a paltry 0.5 percent of the popular vote.

Chamisa was also elected substantive leader of the MDC Alliance in March 2019 at a party congress in the city of Gweru.

As can be clearly determined, whilst the issue of who was the legitimate interim leader of the MDC-T was still pending in the courts, the two contenders had proceeded to lead their own separate political parties, held elective congresses – in which they were elected their respective party’s substantive leaders – and, even contested in the country’s harmonized elections.

This effectively meant that the Supreme Court decision came rather late, as even the justices themselves attested to in their judgement, saying, “the imbroglio that the party’s leadership has become entangled in may be water under the bridge”, as ” rendered moot and academic by political events that have taken place”.

This court verdict also instructed that an elective congress be held by the MDC-T to choose their substantive president – rather ridiculously reversing Khupe to being an acting president of the party that had chosen her as its president in April 2018.

Thus, where does this leave both these bitter rivals?

For Chamisa, he has no cause for concern, as he has since moved on to become the president of his own party, the MDC Alliance, and is no longer interested in leading the MDC-T – since this judgement has absolutely nothing to do with the goings on in his ‘new’ organization.

His life should go on as normal.

The same, however, can not be said for the apparent winner of this court case (Khupe) – who, instead of jubilantly celebrating her much awaited ‘victory’, she now has to contend with facing another bruising fight for her party’s leadership – in accordance with the Supreme Court ruling, for an elective congress to be conducted within three months.

Unlike in 2018, when emotions were very high, after the perceived usurping of power by Chamisa, after the passing on of Tsvangirai – which played a huge part in Khupe being supported by a section of the MDC-T hierarchy, as the legitimate heir apparent – this time around, she is potentially faced with a whole new set of challengers, who could be greedily eager take over the reigns.

Already on people’s tongues are the likes of Morgen Komichi and Douglas Mwonzora – both of whom were also effectively reinstated in their former positions within the MDC-T by the same court verdict (as chairperson, and secretary general, respectively) – and are known for their ambitious nature.

These are the same fellows who did not take their respective defeats, at the March 2019 MDC Alliance elective congress, very well.

Although, they appeared to furtively back Khupe’s fight in the courts – subsequently, coming out in the open after the Supreme Court judgement – this should never be mistaken as unequivocal support for her to be their leader.

Similarly, the two previously appeared to favour the ascension of Chamisa as interim leader of the MDC Alliance – refusing to align themselves with Khupe’s MDC-T – yet, Mwonzora was more than ready to challenge him at the party’s elective congress, and after failing to accumulate enough provincial structures support, became a bitter loser.

As such, Khupe would be very foolish not to know what awaits her at her party’s own second-innings elective congress – as these two (Mwonzora and Komichi), who may appear to be celebrating with her, could be her greatest headaches, who may even potentially kick her out of the political game completely…or, at least, the echelons of power.

Such is the game of politics – as they say, “there are no permanent friends, or permanent foes”.

Of course, those who do not understand the larger implications of this Supreme Court judgement, would want to jubilate over their misconstrued belief that this was a censuring of Chamisa, as not being the legitimate president of the MDC-T – yet, it is not, as this pronouncement only affects the happenings in the MDC-T, which Chamisa is no longer part of it.

This verdict, in fact, is a potential “nail in the political coffin” for one Thokozani Khupe! Maybe, it was not a damp squib after all!

The post Khupe has more to worry over Supreme Court MDC leadership verdict than Chamisa appeared first on Zimbabwe Situation.