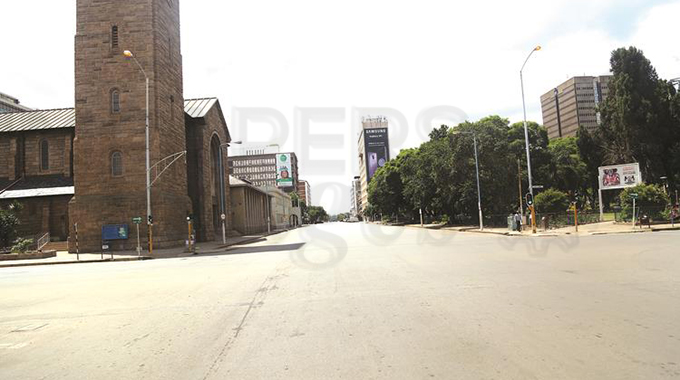 Herald Reporters
ENFORCEMENT of the 21-day national lockdown is yielding positive results in Harare’s Central Business District, but the situation is different in residential areas where people are not taking the stay at home guidelines seriously.

Security check-points have increased on all roads leading into the city centre.

Motorists and Zupco passengers are being vetted resulting in significant reduction of human and vehicular traffic.

However, the situation is different in most of the city’s western suburbs. Human traffic is high at most shopping centres where bottle stores are open. Several gatherings in the suburbs WERE witnessed where people were playing social games such as chess, pool and football.

At boreholes and markets for vegetables, people were not observing social distancing.

Traffic in Mutare was low due to strict monitoring by police officers manning roadblocks.

In the residential areas, movement of people has also declined as a result of mobile outreach programmes by Government and its partners to educate people on ways to curb spread of Covid-19. About 131 people have been arrested in Mashonaland Central for contravening the national lockdown.

Roadblocks on all roads leading out of Bindura continue to be manned by security forces.

Several vending stalls have sprouted in residential areas, as people try to fend for their families despite the lockdown.

Generally, people in Bindura remain in compliance with the lockdown.

In Beitbridge, while most of the residents have continued to stay indoors, those that still queue for basic commodities at business centres are still failing to maintain social distancing.

Police has remained visible at business centres during and before operating hours. All business in the border town is taking place between 8am and 3pm daily.

In Midlands, people continued to take heed of Government’s call to stay home.

President Mnangagwa, who yesterday toured Gweru Central Business District, Senga, Mkoba and Mambo suburbs said he was satisfied with the level of compliance.

In Masvingo, people continued to observe the lockdown, with police maintaining a heavy presence, while movement continued to be extremely constricted.

The development comes as the Masvingo provincial Covid-19 taskforce at the weekend resolved to improve compliance with the lockdown by increasing police presence to plug loopholes. Upgrading works at various isolation centres across the province continue after Tongaat Hulett Zimbabwe donated over $12 million towards the programme.