Source: MDC-T locks out Mwonzora, Komichi | Newsday (News) Turbulence continues to rock the Thokozani Khupe-led MDC-T after a top member of the party declared that he was in charge and was seized with organising the party’s extra-ordinary congress as recently ordered by the Supreme Court. BY MOSES MATENGA This effectively locked out Douglas Mwonzora, […]

Turbulence continues to rock the Thokozani Khupe-led MDC-T after a top member of the party declared that he was in charge and was seized with organising the party’s extra-ordinary congress as recently ordered by the Supreme Court. 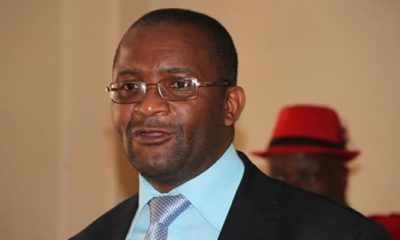 This effectively locked out Douglas Mwonzora, who had declared himself party secretary-general.

Two week ago, the Supreme Court made Khupe the acting MDC-T president, saying all appointments made by the late MDC founder Morgan Tsvangirai, including the elevation of Nelson Chamisa and Elias Mudzuri as vice-presidents of the party, were unconstitutional.

The Supreme Court ordered Khupe to hold an extra-ordinary congress within three months to settle the leadership dispute in the opposition party.

Besides the judges noting the judgment could be academic, as Khupe and Chamisa now lead different parties that contested the 2018 elections, Mwonzora immediately claimed he was the secretary-general of the party and would soon call for congress as ordered by the court.

But yesterday, Nickson Nyikadzino, who was elected MDC-T secretary-general at Khupe’s 2018 extra-ordinary congress, insisted Mwonzora, who is an MDC Alliance senator, now belongs to the MDC Alliance.

Nyikadzino said he was the bona fide secretary-general of the MDC-T elected at congress, not Mwonzora, and would be in charge of the congress preparations.

Another MDC-T official, Tarisai Chikuvanganga, from Chakari constituency, also wrote a second letter to Khupe warning her against embracing Mwonzora and Morgen Komichi, who is also an MDC-Alliance senator.

Chikuvanganga argued that the two should apply for readmission into the party and wait at least five years to occupy any leadership position.

Nyikadzino said the extra-ordinary congress ordered by the Supreme Court only related to the dispute in the presidium after Tsvangirai’s death and he remained firmly in charge as secretary-general of the party elected at the 2018 congress.

“In continuing to execute my responsibilities as the secretary-general of the party, I shall advise stakeholders on the path the party will be following,” he said.

“I am cognisant of the fact that we contested the 2018 harmonised elections as the MDC-T and at bare minimum, managed to secure a seat for a Member of Parliament in the Lower House as well as a senatorial seat. I shall be communicating the party position with regards to these deployments within the next few days.”

Nyikadzino added: “As such, please note that there is only one secretary-general of the MDC-T as elected at the said congress on the 23rd of April 2018, which was legally convened and attended by bona fide members of our party, the MDC-T. Be guided accordingly.”

Khupe was not picking up her calls yesterday to clarify on the crisis that has befallen her party, while Mwonzora was unreachable.

Komichi, who has positioned himself as the MDC-T chairperson, was said to be in a meeting for the better part of yesterday.

Komichi and Mwonzora announced after the Supreme Court ruling that they were already implementing the ruling, a move that has angered MDC-T officials who feel the two wanted a hostile takeover of the party.

Chikuvanganga, in the latest submission to Khupe, said the MDC Alliance and the MDC-T were separate entities, hence the party, as directed by the Supreme Court, can hold its congress without members of the other party, Mwonzora and Komichi included.

Komichi is a senator under the MDC Alliance in the Midlands province, while Mwonzora is a senator in the same party for Manicaland province.

MDC Alliance secretary-general Chalton Hwende said Komichi and Mwonzora had automatically expelled themselves from the party, a situation that leaves the two unattached, if the MDC-T has its way.

“I have seen that some people who want to benefit from both the MDC Alliance and the MDC-T are now denying the fact that the MDC Alliance is a political party separate from the MDC-T,” Chikuvanganga’s letter to Khupe read.

“It is my considered view that the issue of whether the MDC Alliance is a political party separate from the MDC-T or not was already decided by a competent court of jurisdiction having come before the Constitutional Court (ConCourt) in Case No CCZ 42/18, a matter between Nelson Chamisa versus Emmerson Dambudzo Mnangagwa & 24 others, including yourself.”

In the letter, Chikuvanganga made reference to Zimbabwe Electoral Commission (Zec) chairperson Justice Priscilla Chigumba, who was also a respondent, where she acknowledged the MDC Alliance as a political party separate from the MDC-T.

“If you also look at paragraph 94(c) of President Emmerson Mnangagwa’s opposing affidavit, in that case, he clearly acknowledged the MDC Alliance as a political party separate to the MDC-T,” the letter read.

Chikuvanganga said even Mnangagwa, through the letters inviting Chamisa and Khupe to State House for dialogue, recognised the two different parties, hence there was “abundant evidence” to show that the ConCourt, Zec and Mnangagwa recognised the MDC Alliance as a political party separate from the MDC-T.

“Let us not be used by people who abandoned our party and campaigned against you and they now want us to divert our attention by indirectly fighting Zec, the ConCourt and President Mnangagwa by saying that the MDC Alliance is not a political party when it is a political party,” Chikuvanganga further said.

“The best for us is to move to our extra-ordinary congress as MDC-T and make it clear that those that had moved to the MDC Alliance were automatically expelled from the MDC-T and if they want to come back they should re-apply and wait for five years in order to qualify for any post.”