Source: New ranks for retired ZDF quartet | Herald (Top Stories) Zvamaida Murwira Senior Reporter Commander-in-Chief of the Zimbabwe Defence Forces President Mnangagwa has promoted three major-generals to the rank of Lieutenant-General and one Air Vice-Marshal to the rank of Air Marshal, as the four officers retire from active  service. The three major-generals who were […] 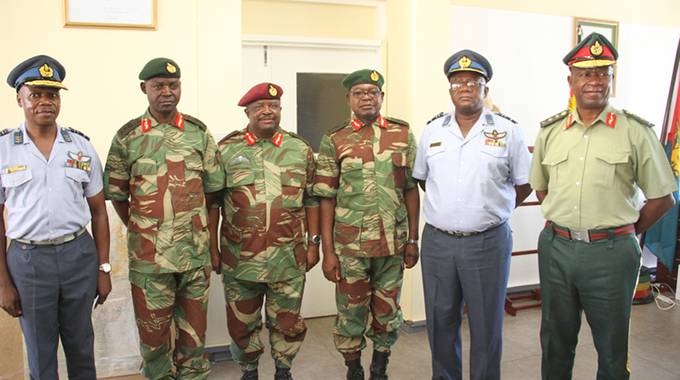 Zvamaida Murwira Senior Reporter
Commander-in-Chief of the Zimbabwe Defence Forces President Mnangagwa has promoted three major-generals to the rank of Lieutenant-General and one Air Vice-Marshal to the rank of Air Marshal, as the four officers retire from active  service.

The three major-generals who were elevated to Lieutenant-General are Martin Chedondo, Anselem Sanyatwe and Douglas Nyikayaramba, while Air Vice-Marshal Shebba Shumbayawonda has been promoted to the rank of Air Marshal.

President Mnangagwa made the promotion in terms of Section 15 (1)(B)(2) of the Defence Act (Chapter 11:02) as read with the ZDF policy retirement of ex-combatants and founder members approved on February 28 2002, as well as the ZDF retention inducement and retirement policy for active ex-combatants approved on December 30 2017.

Speaking during the investiture ceremony, ZDF Commander General Philip Valerio Sibanda challenged the officers to continue working hard at their new assignments in the diplomatic service.

“We are very happy for you and your families. Just to say this has happened as a result of the work you have been doing. It is a recognition of that effort that you have been putting to the work of the ZDF over the years. I am aware you are going to be reassigned, and I want to urge you to continue to work as hard as you have been doing. It might be outside the military but whichever way I want you to remain steadfast because once a soldier always a soldier,” said Gen Sibanda.

“You never know anyone of you might find himself back in the system sometime in future. So you have a lot of work to do, and we are counting on you to continue to work as you have done in the past. Eyes are going to be on you because this is like a new beginning for yourself and we believe you are not going to let us  down,”

Speaking on behalf of his colleagues, Lt-Gen Chedondo said they will continue to be loyal to the Constitution and command establishment.

He hailed President Mnangagwa for the confidence he showed by elevating them to higher ranks.

“We undertake to be always be loyal to the Constitution and command establishment of the ZDF and at the same time we always undertake to serve the people of Zimbabwe. May I also take this rare opportunity Commander Sir, to heartily thank you together with your command element for tirelessly mentoring us throughout our military career spanning over 40 years inclusive of the liberation struggle. It is through your efforts that we have got to where we are today through your tireless and consistent guidance,” said Lt-Gen Chedondo.

“We have worked in unison with the rest of the force and people of Zimbabwe in efforts directed at building our great Motherland Zimbabwe. Commander Sir, allow me to thank men and women of the ZDF for the support they have rendered in our fulfilment of the mission at hand. It is always through the acknowledgement of efforts of those above you and those who you command that you can only climb to greater heights hence I really acknowledge the support we have received and assure you that the support did not go to waste as we continue to ride on what we have achieved so far.”

He said the new ranks they had been conferred would not be used for self-aggrandisement.

“It is on this basis that even in our new capacities, we are alive to the challenges His Excellency, Commander-in-Chief of ZDF Cde E. D. Mnangagwa has laid on a new trajectory for an upper middle class for the economy for the country by the year 2030. That is no mean task and in order for that to be achieved, it is imperative that in all stations that we will occupy, we will be guided by that vision and it is on that score that I encourage all of us to ensure that we mobilise national synergies in order to achieve the Commander-in-Chief’s vision,” said Lt-Gen Chedondo.

The four are set to join the Ministry of Foreign Affairs and International Trade and were expected to begin training in diplomatic etiquette  soon.