Source: ‘No to violence, divisions’ | The Herald President Mnangagwa hands over the national flag to the widow of the late Cde Simon Khaya Moyo, Margaret, in Harare yesterday. — Pictures: Innocent Makawa Fungi Kwaramba Political Editor AS THE country hurtles towards next year’s by-elections and the 2023 harmonised national elections, President Mnangagwa has called […]

The post ‘No to violence, divisions’ appeared first on Zimbabwe Situation.

Source: ‘No to violence, divisions’ | The Herald

AS THE country hurtles towards next year’s by-elections and the 2023 harmonised national elections, President Mnangagwa has called upon Zimbabweans to shun violence and embrace unity and love as was espoused by the humble and hard-working Cde Simon Khaya Moyo who was interred at the National Heroes Acre yesterday.

In the spirit of oneness and servant leadership that was embodied by the late veteran nationalist, Zimbabweans should strive to play their part in the advancement of the nation’s goal of becoming an upper-middle economy by 2030, the President added.

In pursuit of the nation’s collective aspirations, land has to be used productively to ensure a bumper harvest, while those with skills should deploy them in areas that will help grow the economy as was always the case with the late Cde SK Moyo who served his nation with distinction as a freedom fighter, a selfless civil servant, a diplomat, a minister and until his death when he was the Zanu PF spokesperson.

“Now that the 2021/2022 summer cropping season has begun, let us productively utilise our land and record yet again, another bumper harvest. As Zimbabweans, we are a great and hardworking people.

“We are fearless and brave warriors, who never give up until victory is attained. This is the legacy that the late Cde Simon Khaya Moyo and many other departed heroes and heroines of our great motherland have bequeathed to us. Let us, therefore, continue to revere and safeguard it, as we journey towards Vision 2030.

“Our culture of non-violence and peace; along with our values of unity, love and respect must continue to be the fundamental building blocks that distinguish us as a people and as a nation. This is more important as the nation prepares for the democratic national electoral processes in 2022 and 2023,” the President said. 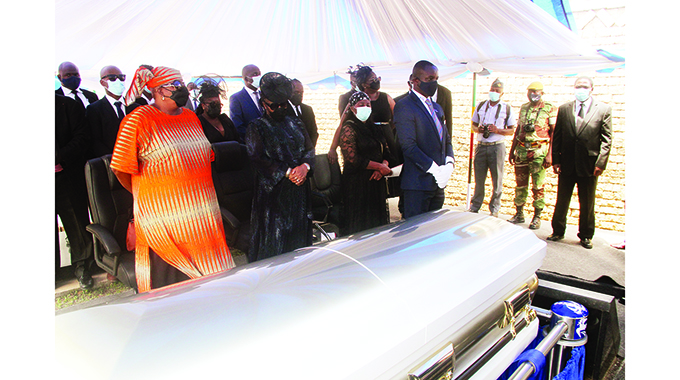 The late Cde Khaya Moyo, who held several Cabinet posts in independent Zimbabwe was a cadre who was ever willing to be deployed on whatever front that the party deemed fit and when he was the country’s representative to South Africa, at the height of the land reform programme, he again served his nation with aplomb and distinction.

“On the diplomatic and external relations front, the late national hero engaged several diplomatic missions on issues relating to the land question and agrarian reform, as well as the party’s revolutionary mission and objectives.

“He was always instrumental in deepening the fraternal relations amongst former liberation movements within the region and other progressive organisations the world over,” the President added.

Despite his proximity to the higher echelons of power, the late nationalist never abused his role, a trait that public servants and bureaucrats should emulate.

“He never exhibited a sense of entitlement, his career was informed by hard work and unflinching loyalty to the nation, not driven by the pursuit of promotions or holding senior positions in the public service.

“His assignments in both the party and Government are a testimony that he was a cadre who always availed himself for deployment. He never said no to a task. Such must be the nature of the new and emerging generation of heroes and heroines who must avail themselves to be deployed to utilise their capabilities, skills and competencies for the development, modernisation and industrialisation of our great country,” the President said.

In honour of Cde Khaya Moyo, President Mnangagwa said the nation must rise “beyond misplaced perceptions of differences and divisions”.

“We are diverse but one people. Let us unite as labourers and servants of our great country to build the Zimbabwe we all want brick by brick, stone upon stone.”

The President said the media and players in the communication industry must also, like the late Cde Khaya Moyo, advance national interests to build a prosperous Zimbabwe enjoyed by all.

The President said the late national hero was a voice of Pan Africanism.

“In the late Cde SK, we have lost a true patriot, an astute and rare breed of spokesman and Pan-African voice. He was a man who articulated with clarity the mission of our party and Government with regards to uniting the nation, as well as organising and inspiring people to be masters of their own destiny. His demeanour and personality exuded the nature of the devout Christian he was,” the President said.

Turning to the Covid-19 pandemic and the festive season, which is around the corner, the President urged Zimbabweans to keep their guard, get vaccinated and stick to Covid-19 WHO protocols.

In January this year after the festive season, Zimbabwe recorded a surge in infections as well as deaths from the global plague after people had dropped their guard.

He was 76 and is survived by his wife Margret and two children and three grandchildren.

The post ‘No to violence, divisions’ appeared first on Zimbabwe Situation.