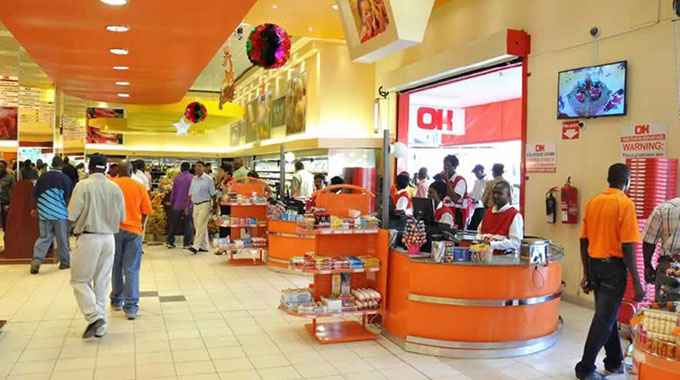 The Zimbabwe Stock Exchange listed retailer, OK Zimbabwe, has recorded a 15 percent drop in sales volumes for the third quarter for the financial year ending March 31, 2020 on the back of hyperinflation environment that has eroded consumers’ incomes.

The firm argued that the alternative sources of power brought little relief as “the use of generators to power operations increased costs significantly as a result of high fuel usage, servicing and repairs.”

Exchange rate stability and mitigation strategies such as adequate stocking were met with unpredictable pressures such as continuous price increases and subdued demand respectively.

“While there was relative stability in the exchange rate during the quarter to December 2019, product prices continued to increase albeit at a slower pace.

“The stores were adequately stocked for the festive season, but demand was subdued, reflecting the impact of continual erosion of incomes as a result of hyperinflation. Indeed, demand was soft throughout the nine months from April to December 2019,” said company secretary Margaret Munyuru in a statement accompanying the trading update.

The stable exchange rate in the months between October and December drove inflation figures to commendable levels.

Month-on-month inflation dropped from 17,5 percent in November, to 16,5 percent in December 2019 and rapidly to single figures at 2,2 percent in January 2020.

Despite the southward movement in inflation on the back of stable exchange rates, the gradual increases in product prices impacted on the business’ sales volumes significantly.

The 15 percent drop in sales volumes was, however, an “improvement from -23 percent reported for the six months ending 30 September 2019.” Cumulative growth, though, remain negative at -20 percent below prior year.

Revenue for the quarter was up 10 percent (inflation adjusted) on prior year.

Profit margins were “consistent with the performance reported for the half year ended 30 September 2019.”

The main trend in many recent trading updates was one of increased revenues and plummeting volumes.

To brave the rather difficult operating space, the group will consider maintaining adequate stocks, while pursuing cost-containment measures.

Refurbishment of old stores and launching of new ones will remain a central priority.

“Despite the difficult conditions, the Group will continue to take all steps necessary to ensure that the stores remain adequately stocked to the end of the financial year and beyond. Cost control remains an area of continuous management focus to ensure the business remains a going concern.

The group will continue to invest in the refurbishment of its stores and open new ones in viable locations where it is not represented,” she said.