Source: Our Ponzi Country – Zimbabwe Vigil Diary: 2nd March 2019 https://www.flickr.com/photos/zimbabwevigil/33391923648/sizes/m/ Zimbabwe’s financial system has been described as a Ponzi scheme. It’s obviously true. But it is not the whole truth. The reality is that Zimbabwe is a Ponzi country, a hotbed of fraud. A Ponzi scheme, for those unfamiliar with the term, is […] 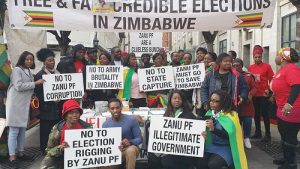 Zimbabwe’s financial system has been described as a Ponzi scheme. It’s obviously true. But it is not the whole truth. The reality is that Zimbabwe is a Ponzi country, a hotbed of fraud.

A Ponzi scheme, for those unfamiliar with the term, is a way of creaming off money from deluded investors. They initially receive handsome returns but this does not come from profits on their investment but from new suckers drawn into the scheme, which inevitably ends up going bust. It’s like a raft floating down the Zambezi towards the Falls (see: https://www.bloomberg.com/news/articles/2019-02-28/how-a-giant-ponzi-scheme-destroyed-a-nation-s-economy).

MDC leader Nelson Chamisa told the French broadcaster France 24 that President Mnangagwa was out of touch with reality. ‘He has chosen to institutionalise deceiving the world, deceiving the people and deceiving himself.’ See: https://www.newsday.co.zw/2019/02/ed-out-of-touch-chamisa/.

The hysteria in government-controlled media hailing a supposed huge investment by Botswana reflects the government’s desperation. Any sign of an inflow of money postpones looming bankruptcy.

Botswana’s President Masisi had to tell reporters back in Gaberone that reports that he was giving Zimbabwe hundreds of millions in loans was totally untrue. All he agreed was to support a private credit line of $100 million for Botswana companies to invest in Zimbabwe (see: https://www.reuters.com/article/us-zimbabwe-botswana/botswanas-president-denies-report-of-600-million-loan-to-zimbabwe-idUSKCN1QI4TL?il=0).

The financial reality was brought into sharp focus this week by the German Ambassador Thorsten Hutter. Like all Ponzi victims he lamented the failure of Zimbabwe to repay its debts. He said Zimbabwe owed Germany $550 million. It was prepared to offer further financial assistance but there must be a commitment to repay debt and a return to the rule of law and human rights by Harare. The ambassador urged SADC to intercede and arranged talks between the opposing parties in Zimbabwe to deal with the crisis (see: https://bulawayo24.com/index-id-news-sc-national-byo-157227.html).

And crisis it is. Far from planning military intervention as some of the more excitable observers claim, the United Nations has launched an appeal for $234 million to help an estimated 5.3 million Zimbabweans facing starvation this year.

While Mnangagwa flits around the world like Mugabe on his expensive jaunts, a teachers’ spokesman says a quarter of children are not in school . . .  and meanwhile customs duty has suddenly soared . . . and petrol shortages continue. It’s what happens when Ponzi hits the fan.

FOR THE RECORD: 31 signed the register.