Source: Political dialogue: ‘Mnangagwa, Chamisa must swallow pride’ – The Zimbabwe Independent ANDREW KUNAMBURA THE move by President Emmerson Mnangagwa to block the proposed mediation by former South African president Thabo Mbeki reflects the lack of seriousness and lethargy by government to engagement in meaningful dialogue to solve the multi-faceted national crisis. Zimbabwe is in […] 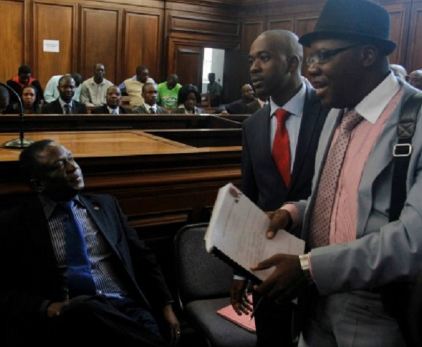 THE move by President Emmerson Mnangagwa to block the proposed mediation by former South African president Thabo Mbeki reflects the lack of seriousness and lethargy by government to engagement in meaningful dialogue to solve the multi-faceted national crisis.

Zimbabwe is in the middle of an enervating political economic and social crisis which many widely believe could be resolved through a comprehensive national dialogue culminating in a power-sharing deal between Zanu PF and the Nelson Chamisa-led main opposition party, MDC, which feed into parliament.

He held meetings with various political stakeholders, including Mnangagwa and Chamisa as well as several other politicians and civil society leaders.

It was during these meetings — meant to enable him to acquaint himself with the crisis in Zimbabwe while laying the groundwork for negotiations — that the established regional power broker realised the extent of divisions between the two. During the visit, two dimensions emerged, which led analysts to question their commitment to finding lasting solutions to the national crisis.

First, Mbeki found both sides unflinching in their previous standpoints; Mnangagwa insisting that he can only negotiate with Chamisa on condition he joins the Political Actors Dialogue (Polad) platform, a collective of political midgets whose combined votes only sum up to a mere fraction of what Chamisa got in the 2018 presidential election, notwithstanding the latter’s claims that had he not been rigged, the number could have been much higher.

Secondly, analysts agree that it has all but degenerated into an ego issue, whereby both appear to be putting their interests ahead of those of the nation, to the detriment of the latter.

Basically, Mnangagwa argues that Chamisa has to recognise him as the legitimate head of state for him to even start considering him on the negotiating table. An adamant Chamisa, on the other hand, says the only reason why there must be talks is that Mnangagwa’s legitimacy is questioned and this forms his very foundation for dialogue.

“The question is whether or not any of them will be humble enough to realise that they have a nation to serve and they are not doing it any favours by demoting national interest while placing their own interests ahead,” University of Zimbabwe political science lecturer Tawanda Zinyama said. “So far, there is no evidence of them shifting from their hardline stances, epitomised clearly by the blocking on Mbeki.”

But some analysts believe that while both Mnangagwa and Chamisa deserve a stick for their hardline stances, the bigger portion of blame lies squarely at Mnangagwa’s doorstep as he holds the keys to unlock dialogue in his capacity as head of state.

As we reported last week, Mbeki has failed to return to Harare to continue with the preliminary talks as he had promised earlier amid reports Mnangagwa has been ignoring calls from the respected African elder.

Analysts believe that apart from helping cast doubts over his acumen, also brings into focus his diplomatic dexterity, or lack of it, since some Sadc countries are increasingly frustrated by lack of movement on Mbeki initiative.

Political analyst Maxwel Saungweme said: “There is no doubt that there is need for dialogue and everyone must come to the party, but first the president has to show a genuine desire for it. The current economic situation now cannot be allowed to go on as it is and the earlier steps are taken the better,” Saungweme said. “What has to be understood and accepted is the fact that in a dialogue, you have to forfeit or sacrifice something. You do not engage in a dialogue expecting to win everything along the way. So I think what is needed at the moment is for both leaders to swallow their pride and negotiate purposefully.”

Yet, with none of them keen on any giving anything away, it begs the question: Is the dialogue option totally doomed, or there is still a chance?

Political scientist Ibbo Mandaza believes there is still chance for negotiation, especially in the context of the economy putting government into a corner and Chamisa facing growing frustrations in his party.

“Mnangagwa has to first realise that Polad is a joke; it is not going anywhere and it won’t help him. Then, there is still room for a true national dialogue convened by the civil society. With things getting out of hand economically, it would be imprudent for him to ignore a nationally constituted platform. I don’t think he can afford to ignore it,” Mandaza opined.

With the nation on the edge, a situation which has since been exacerbated by the rampaging coronavirus, which caused the deadly Covid-19 diseases, it is becoming clearer as each day passes that only a proper dialogue can haul Zimbabwe from the current doldrums.