Source: Politicisation of food on the increase: ZPP | Newsday (News) POLITICISATION of food aid is on the increase countrywide, with Zanu PF activists and war veterans being mentioned as the chief culprits, the Zimbabwe Peace Project has said in its latest report. BY SILAS NKALA “The continued deprivation of food aid to the vulnerable […]

The post Politicisation of food on the increase: ZPP appeared first on Zimbabwe Situation.

Source: Politicisation of food on the increase: ZPP | Newsday (News) 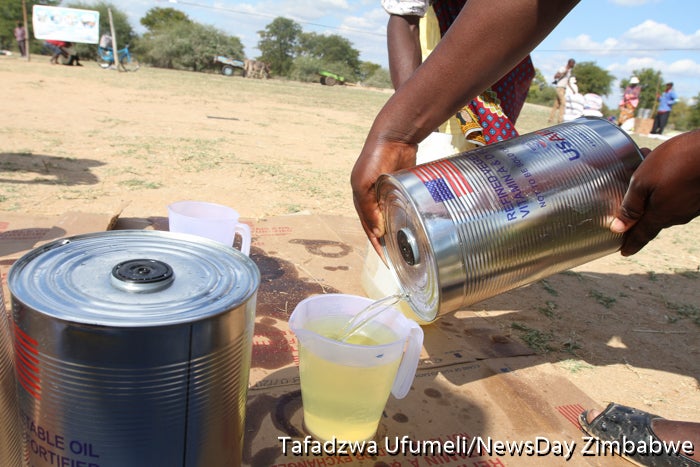 POLITICISATION of food aid is on the increase countrywide, with Zanu PF activists and war veterans being mentioned as the chief culprits, the Zimbabwe Peace Project has said in its latest report.

“The continued deprivation of food aid to the vulnerable due to political affiliation is a worrying trend that must be addressed immediately. Section 77 in the Zimbabwean Constitution clearly provides for the right to food. The State has the obligation to ensure that right is provided for all citizens whatever their political persuasion,” ZPP said.

“Conflicting reports from government officials in acknowledging that there indeed is discrimination in food allocation is worrying to say the least. Local Government, Public Works and National Housing minister July Moyo (chairperson of inter-Cabinet committee that deals with disaster and climate change) recently confirmed that government was concerned over reports of abuse of food aid. However, Public Service, Labour and Social Welfare minister Sekai Nzenza recently refuted reports of partisan distribution of food aid.”

ZPP urged government to tackle the problem and deal with Zanu PF officials who are depriving citizens of food aid.
“The 5,7 million Zimbabweans reportedly needing food aid (Zimbabwe Vulnerability Assessment Report) will fail to get the needed assistance if partisan allocation of aid is not addressed. The depressed socio-economic environment in Zimbabwe is increasingly a cause for concern as citizens are frustrated,” ZPP further noted.

The peace watchdog expressed concern over threats by Defence deputy minister Victor Matemadanda to unleash soldiers on citizens who join the Zimbabwe Congress of Trade Unions and MDC’s protests against the poor social and economic conditions prevailing in the country.

The ZPP implored those in power to exercise restraint when making statements as they risk inciting violence.
It reported that on July 12, Zanu PF youths in Murewa North forced villagers to convene a development meeting at Zihute Hall in ward 30.

The youths, led by Innocent Mhutebwani (45) and Tashupika Mushonga (60), threatened and intimidated villagers suspected of listening to Voice of America Studio 7 radio station.

“Villagers were told that Zanu PF members will conduct a local operation called Muphone Mako Munei? (What’s in Your Phone?) in order to bring to book opposition supporters who keep Studio 7 content in their phones. These threats are a clear indication of the increasingly intolerant landscape. A democratic society is evident through people of different persuasions thriving side by side without confrontation and retribution,” ZPP reported.

The watchdog said it noted incidences of inter and intra-party violence within and among the leading political parties. The organisation urged political actors to be exemplary in exercising peace.

“We are also concerned by reports that people have been victimised and intimidated during First Lady Auxillia Mnangagwa’s outreach visits. One such case was reported in Mazowe Central at Rosa Rural District Hospital in ward 9, where suspected State security agents reportedly harassed Simbarashe Sithole, a freelance journalist, confiscated his Press card and barred him from conducting his duties.”

ZPP said in Binga North, the First Lady reportedly castigated women for failing to take up business opportunities and “allowing” other tribes to take resources from them; offending and angering residents in the process.

“We urge all leaders in their various capacities to exercise restraint and create an enabling environment for peace, and desist from fermenting contention and strife. War veterans are an important part of Zimbabwe’s legacy and we appreciate the immense contribution they made to the liberation of Zimbabwe. We are also alive to the fact that this liberation was to ensure that every Zimbabwean thrives in a free society,” said ZPP.

The rights watchdog said some war veterans have exhibited predatory tendencies by depriving food aid to the vulnerable, threatening the peace of Zimbabweans for expressing their political opinions and hounding people for monies to commemorate Heroes Day.

“We beseech the liberation fighters to dig deep and return to the heroes of old, championing the rights of every Zimbabwean and fostering a free and peaceful country.”

The post Politicisation of food on the increase: ZPP appeared first on NewsDay Zimbabwe.

The post Politicisation of food on the increase: ZPP appeared first on Zimbabwe Situation.