THE Commander-in-Chief of the Zimbabwe Defence Forces, President Mnangagwa, yesterday promoted two Zimbabwe National Army colonels to the rank of brigadier generals and 23 majors to lieutenant colonels with effect from 31 December 2021.

The President made the promotions in terms of Section 15 (1) (b) of the Defence Act, which reads: “His Excellency, the President of the Republic of Zimbabwe and Commander-in-Chief of the Zimbabwe Defence Forces may, on the advice of the minister acting on the recommendation of the commander, promote or temporarily appoint an officer to a higher rank.”

Conferring new insignia of rank to the newly-promoted generals at army headquarters, Commander Zimbabwe National Army, Lieutenant-General David Sigauke called on the general officers to continue guiding and inspiring those under their command on the requirement to safeguard the gains of the country’s hard won independence. 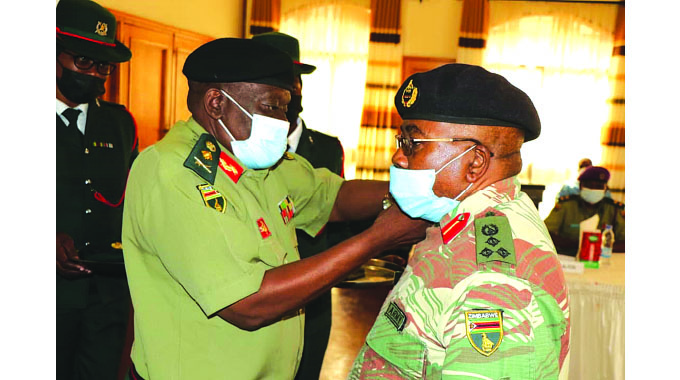 “This recognition by the entire chain of command should give you energy and the zeal to uphold exemplary leadership, a principle which you acquired and consistently practiced over your long years of illustrious service.

“The entire command element and your subordinate ranks have faith and trust in you that you will diligently discharge your duties as general officers with professionalism, honour and integrity synonymous with this rank,” Lieutenant General Sigauke said.

He encouraged the promoted generals to remain focused in defending the nation.

“I therefore encourage you and those placed under your command never to lose sight or abandon this noble cause for whatever reason or expedience. I need not remind you that we as the ZDF, remain the last line of defence of our nation.”