Source: Social distancing worry for Mbare Musika | Herald (Top Stories) Victor Maphosa Herald Correspondent Zimbabwe’s largest fresh produce market, Mbare Musika, officially reopened yesterday, but with social distancing and  washing of hands not being observed. Such measures were, however, in force at the smaller Highfield Market, a few kilometres away, with soap and water […] 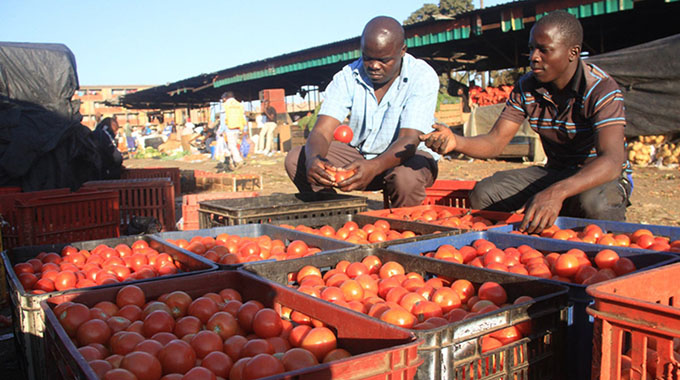 Such measures were, however, in force at the smaller Highfield Market, a few kilometres away, with soap and water available, while officials enforced social distancing.

President Mnangagwa reclassified all produce markets as essential services and directed that farmers should be allowed to deliver their vegetables to the markets.

Police and council officials were maintaining order at Mbare Musika, but without setting and enforcement of health measures.

Murehwa farmer, Passmore Manyere, voiced his concerns about the lack of health measures at Mbare Musika, saying people should not forget the need to stay safe and follow the recommended ways of doing business.

“We are thankful to the President for allowing us to bring our produce to the market,” he said.

“When the lockdown started some of us had a lot of ready produce and it all perished. My worry now is also on the state of this market.

“Yes, we need to make money, but there are health measures that we should strictly follow to curb the spread of Covid-19. We expected to see the city council officials here with sanitisers or water to wash our hands and also limiting the number of people entering the market at any one time so that social distancing can be observed.”

Manyere blasted Harare City Council for not cleaning the market, despite a joint operation last week by police and the council to disinfect the area.

Mr Edward Kahana of Macheke said there was need to take preventive measures since the market was well known for overcrowding.

He reported a slow start to business, despite large crowds, and thought a lot of his personal customers were observing the lockdown.

“We sell perishable products and the lockdown had affected us,” said Mr Kahana.

“Business is slow today. Our customers are locked in their homes. We hope the situation will improve as days go by.”

Mr Kahana repeated calls for Harare City to provide sanitisers and water for people to wash their hands.

To show what is possible in Harare, the nearby Highfield Market presented a quite different scene.

Officers manning the market were instructing farmers and the public to wash their hands with water and soap, which was provided by the city council.

They were controlling the number of people allowed in the market encouraging everyone to maintain social distancing.

Farmers at the Highfield market also commended the Government for allowing them to open the markets, but recognised that many normal customers were observing the lockdown.

“I am into horticulture and I have a lot of tomatoes at my farm in Mutoko,” said Mrs Mapfumo.

“When the lockdown was announced, I had a lot of tomatoes and cucumbers which were ready for the market and they all perished.

“The decision by our President to reopen our markets came at the right time and we are thankful. Some of our produce is still in the fields and ready again for market. On a normal day, we could have gone back to Mutoko by now, but we still have a lot of produce to sell.”

Beitbridge town has since reopened its four fresh produce markets, with town clerk Mr Loud Ramakgapola saying they had set opening times between 8am and 3pm.

“These are easy to monitor because they are in built up areas and their operation time has been set to match that of other essential shops, which open at 8am and close at 3pm.”

A team of municipal police and the environmental health officials is on the ground enforcing standard operational procedures as set out in the national Covid-19 response plan.

In Masvingo, the main fresh produce market, Chitima Market, was also open and set its trading hours at between 5am and 7am, bringing relief to residents seeking fresh produce.

Masvingo in conjunction with the provincial Covid-19 taskforce resolved to designate Chitima as a wholesale market operating for two hours daily to avert congestion.

Sakubva vegetable market in Mutare opened for business at 6am, as farmers from across the province brought in their produce.

It will be operating for three hours until 9a daily.

Municipal and ZRP officers were posted at strategic positions to maintain order around the open space that was identified within the market for farmers to sell from.

Farmers complied with social distancing with most of them selling their wares from their cars or trucks.

Three retail market areas in the city centre were given the nod to operate by the Mutare district Covid-19 taskforce.

All retail markets in town are expected to operate from 9am to 3pm when all the shops close for the day.