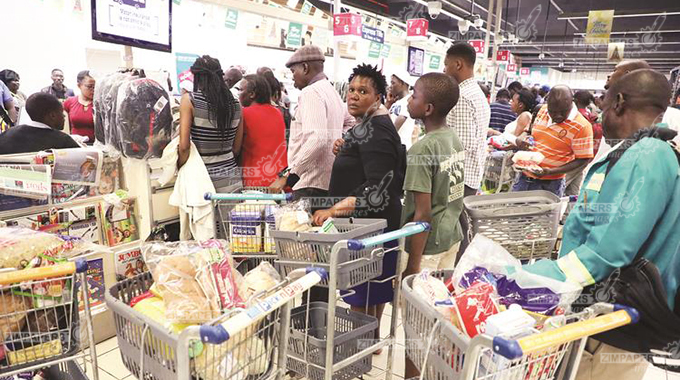 Retailers had been expecting a more subdued Christmas, but were pleasantly surprised by the sudden influx of shoppers.

With President Mnangagwa and Finance and Economic Development Minister Professor Mthuli Ncube announcing that the country was exiting austerity and moving into prosperity and some companies having paid bonuses, citizens demonstrated their desire to celebrate today.

Supermarkets and tuckshops in Harare recorded brisk business from midday.

Hundreds of people besieged banks yesterday to withdraw cash for bus and kombi fares or to take advantage of lower cash prices in the informal economy.

But banks soon ran out of available cash as the informal economy, where most cash ends up, does not return the cash to banks.

Those with relatives in the Diaspora filed at Western Union, Mukuru.com, World Remit and other registered foreign currency collection centres to collect money sent to them.

A 26-year-old lady, who declined to be named, said she received US$100 from a friend in South Africa through Mukuru.com.

“I am very happy today because I have not encountered any problems in withdrawing my US$100. I joined the queue around 7am and I have just withdrawn my money now,” she said.

Mr Master Chizengwe (38), who got his money from Western Union, said a nephew based in South Africa had sent the money he intended to use to buy groceries for his family.

“My fear was that I would not be able to get my money today since I was number 105, but as you can see, I got served and I am very happy,” he said.

There was traffic congestion in the Harare central business district (CBD).

Fortunately, police deployed traffic officers at most of the intersections.

Robert Gabriel Mugabe International Airport saw a spike in passengers as planes brought home Zimbabweans returning for Christmas or from conducting business outside the country.

The flights also saw foreign visitors as part of the traffic. Traffic marshals at the airport were busy trying to ensure the arrivals section was clear because of the sheer numbers.

Goat sellers at the intersection of Willowvale and High Glen roads said business was brisk with a goat selling for the equivalent of between US$35 and US$60.

In Bulawayo, Zimbabweans based in South Africa were conspicuous by their vehicles with foreign number plates while customers swarmed banks and supermarkets.

Mr Milton Ndlovu a Zimbabwean from South Africa said: “We are back in the country for Christmas. We brought some of our groceries but you can never be too prepared and we will be shopping for vegetables and perishables.”

A woman from Nketa 6 queuing at Ecobank was not too happy as she said had not obtained cash by midday.

As usual, informal tuckshops were trying to quote prices in US dollars although they were obeying the law to some extent by accepting payment in Zimbabwean dollars

In Masvingo, the festive mood could be felt as people thronged banks to access cash. Shoppers also swarmed most retail shops.

In Gweru, most people were busy buying groceries such as sugar, rice and other necessities saying they needed to feed their families.

Travellers heading to Gokwe said transporters had doubled fares, as they do every year at Christmas when demand rises.

“I have paid $140 to Chitekete in Gokwe yet the normal cost is $90. I just paid because I need to be with family on Christmas Day,” said Mr Tawanda Sibanda.

In Mutare, last-minute shoppers could be seen in supermarkets and clothing shops, with long queues at banks.

There were long winding queues at the banks until after 1pm when the banks closed.

Mutashu yesterday told The Herald that retailers had been busy since Monday as citizens prepared for Christmas.

“We started seeing significant movements from Monday, but the trend of shopping is different from the previous years. Most people are rushing to shops which are offering cash discounts and it seems people had money stashed in their homes,” he said.

“They are now offloading the money and business has picked up. It is not as bad as we had anticipated. We understand that we are moving from the austerity measures era and generally people have little disposable income. The income levels are not matching the inflationary environment and we hope employers will address this issue next year.”

“Parents are doing whatever they can to ensure there is something for their children to enjoy this festive season, when most people will be celebrating the birth of Jesus Christ.

“We are, however, encouraging them to spend wisely as they still have fees and other necessities associated with schools opening in January.”

Economist Mr Persistence Gwanyanya said: “We had anticipated 2019 to be very difficult because of the austerity measures that were put in place.

“Unlike in 2008, at least goods are there on the shelves although people have little disposable incomes. We don’t have shortages of most basic commodities, but I want to urge people to spend wisely as they have to face astronomical school fee hikes next year.”