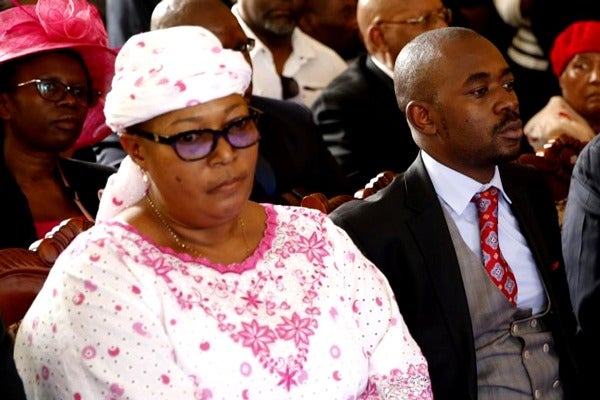 On March 31, 2020, the Supreme Court delivered a unanimous ruling in the seemingly interminable battle over stewardship of the opposition Movement for Democratic Change (MDC). In the case of MDC and Others vs Elias Mashavira and Others SC 56/20, the Supreme Court confirmed the ruling of the High Court against Nelson Chamisa, casting further doubt over the future of the main opposition.
This post unpacks the judgment and its likely implications.

On May 8, 2019, Justice Edith Mushore ruled that the appointment of Chamisa and Elias Mudzuri to the positions of vice-president was contrary to the MDC constitution. The MDC was ordered to hold an extra-ordinary congress under the stewardship of Thokozani Khupe as acting president. The MDC then exercised its right of appeal.

Numerous grounds of appeal were cited and these have been detailed previously. In a nutshell, the MDC took issue with all findings of the High Court from the ruling that the vice-presidents were improperly appointed to the requirement that it holds an extra-ordinary congress.

The MDC insisted that a wrong version of its constitution had been used, incorrect interpretation of its reference to deputy presidents had been rendered and asserted that the application should have been dismissed.

The Supreme Court dismissed all of the MDC’s grounds of appeal. I previously contended that substantive criticism of the Mashavira judgment was not forthcoming because it did not exist. This has been affirmed by the court.

Chamisa’s lawyers even conceded that after months of impugning the MDC constitution used in the High Court, it was actually the legitimate version.

This left it to the Supreme Court to confirm all the findings of the High Court including the ruling that Chamisa had been improperly elevated to the positions of vice-president and acting president.

The order for an extra-ordinary congress with Khupe as acting president was confirmed and this is to be done within three months of the court order.

Further, there is the seismic order that all appointments and/or reassignments and actions by Chamisa in his capacity as vice-president, acting president and substantive president are null, void and of no force or effect.

Yes and no. The court referenced the Ian Smith government’s declaration of Unilateral Declaration of Independence (UDI) and subsequent court cases dealing with the question of incumbency as a matter of fact (de facto) as opposed to a matter of right/law (de jure).

For some judges, even though the Smith government was not legitimate in terms of the law, its effective control of the territory necessitated acceptance of its legitimacy. To an extent, the court similarly acknowledged Chamisa’s populist bonafides.

In typical Justice Bharat Patel perspicacity, he writes that “… I am confronted by what I perceive to be the ineluctable exigencies of realpolitik”. The court noted that Chamisa was elected unanimously at congress, unopposed. He not only has effective control of the party, but he has proven himself the most formidable opposition candidate at the polls.

Thus, the court conceded that Chamisa’s de facto leadership of the Party rendered the appeal academic as it had been overtaken by events.

However, and in a dramatic twist, Chamisa’s own populist bonafides were turned against him. Chamisa’s formidability as a candidate and viability of his party only served to heighten the court’s scrutiny since “… it might someday be electorally elevated to become the ruling party in Zimbabwe.”

The tenets of rule of law and good governance were found to be even more relevant in such circumstances. Thus, the congress which elected Chamisa was not in accordance with the High Court order.

It was not under the stewardship of Khupe as acting president and is insufficient to discharge the obligations created by the High Court order.

Almost like the UDI government in need of proper process before it can be recognised, his populist bonafides require constitutional process to attain de jure incumbency. Populism without process has turned out to be wholly inadequate for the party of excellence.
‘But the judgment is about MDC-T, not MDC Alliance’

Not exactly. The judgment is germane to the MDC. MDC-T was a moniker developed to distinguish the Morgan Tsvangirai faction from that of Welshman Ncube/Arthur Mutambara. Officially, they both remained MDC. Similarly, the MDC Alliance was a vehicle for elections used by seven political parties led by the MDC, hence the prefix to its title.

The MDC Alliance was never a stand-alone party, but a group of parties coalescing around the MDC for purposes of elections. At the conclusion of elections, some MDC Alliance members joined the MDC while others reverted to their own structures.

This is the MDC that was before the court which has to fulfil the judgment order. The Supreme Court made this abundantly clear by stating without equivocation that Chamisa “was unanimously elected as the president of the party, i.e, the one that is presently before this court, at its congress convened in June 2019.”

It is the party which elected Chamisa as president which is required to abide by the court’s findings. Given that the alliance is something that collapsed into the party after elections, it is counter-intuitive to suggest it can be extricated and presented as the bonafide entity which held a congress in 2019. Neither the facts nor the judgment sustain this claim.

‘But Khupe held her own congress’

This is true. The court noted that Khupe may be involved with a different political formation, but found that it does not amount to abandoning her rights and interests in terms of the MDC constitution.

Her activities are insufficient basis to cleanse the constitutional abrogation by the MDC and its functionaries.

In the absence of a judicial determination regarding the circumstances that led to Chamisa’s elevation, her rights and interests in the party remained extant, her activities elsewhere notwithstanding.

What does it mean going forward?

This judgment reinforces Khupe’s claim to the reins of the MDC in real and material terms. She is the acting president of the MDC at law.

Matters to do with party assets, participation in the MDC Alliance as well as disbursements from the State all fall squarely under her stewardship.

These are not trivial matters. It could mean an ability to recall Members of Parliament and local authorities, which comes with the capacity to whip elected representatives into conformity.

Further, it enhances her ability to engage with regional and international actors as the only legally recognised leader of the main opposition.

The swift moves by Morgen Komichi and Douglas Mwonzora to take assertive action and shape the political narrative suggest that those dismissing the judgment out of hand might be underestimating its utility.

Of course, Chamisa retains his public appeal. He can opt to use his numbers to trounce Khupe at the court-ordered extra-ordinary congress. But even as you are reading this, I suspect you share my doubt regarding the plausibility of such new-found collegiality.

Chamisa has done everything in his power to avoid any eventuality in which he is not at the helm of the party, even temporarily.

His experience running against Mwonzora in 2014 likely made him suspicious of electoral processes which are not under his control.

His loyalists’ retorts at the courts were as swift as they were sharp, signally continued disdain with any adverse rulings from the courts.

Without any substantive critique of the judgment, they have opted for insistence that the judgment is inconsequential since their new-found titular home is under the banner of the MDC Alliance.

Insisting on the identity of MDC Alliance involves relinquishing that of the MDC — which may come with loss of real and material power (and possibly assets). It is conceivable that grounds will be found to mount a constitutional challenge.

However, the political dividend from such a move would be minimal in circumstances where there is no impending congress or plebiscite at which electoral performance can countenance constitutional misfeasance.

The most certain outcome is that the Chamisa camp will not take this lying down. I previously presented this as a clash of constitutionalism against populism; a mild, but alarming version of Zanu PF’s conviction that its electoral majority is a license to freedom from constitutional constraints.

After the High Court and Supreme Court have both restated the contents and made orders in terms of the MDC’s own (now undisputed) constitution, they will no doubt retort, “but we have the people!”

If they follow the court order they will also have legal propriety, without which there will be new installments in this ceaseless yet needless confrontation at the expense of consolidating opposition movement.